JERUSALEM—The United Nations and Egypt are pressing Israel and militants in Gaza to agree on an immediate cease-fire as both sides exchanged fire for a second consecutive day, raising fears of a wider conflict that would deepen civilian woes in the blockaded Palestinian enclave.

Israel’s military carried out airstrikes again Saturday targeting what it said were Palestinian Islamic Jihad members and sites across the Gaza Strip. At least 24 Palestinians have been killed, including a senior militant commander and a 5-year-old girl, and 140 wounded since the airstrikes began on Friday, according to the Gaza Health Ministry.

At the same time, Palestinian militants have launched hundreds of rockets at Israel’s south and center, setting off air-raid sirens and sending thousands of Israelis running to bomb shelters.

The violence showed little sign of easing on Saturday night, when a number of Palestinians, including several children, were killed by an explosion in the Jabaliya refugee camp north of Gaza City. The Israeli military said an errant Islamic Jihad rocket was responsible.

Israel’s advanced defense systems have intercepted most of the rockets that crossed into Israeli territory, although a rocket struck a house in the southern city of Sderot on Saturday, causing some material damage. The bombardment in Gaza has been far more devastating, especially for civilians. Israel says it only targets militants.

Israel also closed its border crossing with Gaza when tensions rose earlier this week. With no access to shipments of diesel fuel, Gaza’s sole power plant shut down Saturday, meaning that Gazans will only have about four hours of electricity in the sweltering summer heat.

“We have to be quick, because the humanitarian situation will deteriorate in hours, not days. And then the pressure on Hamas [to act] will start rising,” a diplomat familiar with the cease-fire talks said, referring to the militant group that controls Gaza.


Islamic Jihad is seeking to “negotiate a way out of the situation,” he added, but noted that the talks have yet to see a breakthrough.

Egypt, which shares a border with Israel and Gaza, often helps mediate peace between the two neighbors. It played a critical role in brokering a cease-fire after a deadly 11-day conflict between Israel and Hamas last year.

“Egypt is conducting intensive contacts around the clock to contain the situation in Gaza and work toward a cease-fire,” the Egyptian Foreign Ministry said Friday night.

So far, the fighting has remained relatively limited compared with the May 2021 conflict, which claimed the lives of more than 250 people in Gaza and at least 12 in Israel. Thousands of buildings were damaged across the Gaza Strip and over 100,000 Palestinians were displaced, according to the U.N.

But the Israeli military has called up 25,000 reserves and says it is ready for at least another week of combat against Islamic Jihad, whose officials also say that a cease-fire isn’t imminent.

Tensions could expand to Jerusalem on Sunday, with a coming Jewish holiday leading to an increase in Jewish visits to the Al Aqsa mosque compound, a flashpoint site that is the holiest in Judaism and one of the holiest in Islam.

The latest round of fighting began Friday after Israel launched an air campaign against Islamic Jihad in Gaza, describing it as pre-emptive following days of rising tensions with the Iran-backed militant group. Israel says Islamic Jihad was planning imminent attacks. 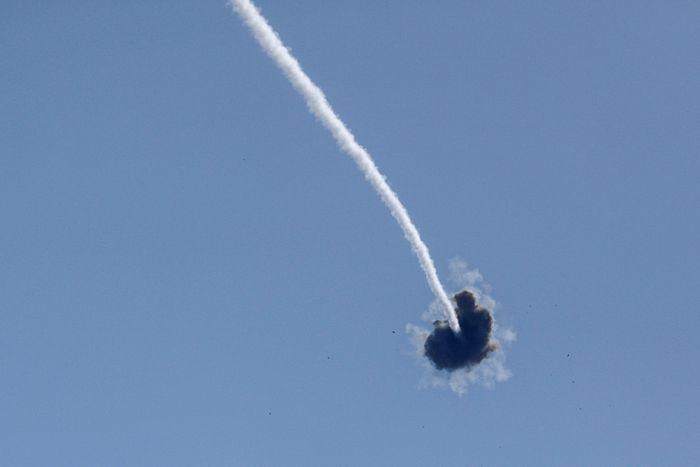 An antimissile system intercepted a rocket launched from the Gaza Strip toward Israel Saturday.

Tensions between Israel and the militant group rose earlier in the week after Israeli troops arrested an Islamic Jihad leader in the occupied West Bank, where Israel says the group has been trying to plan attacks against Israel. Fearing revenge attacks, Israel shut down the border crossing with Gaza and restricted movement in Israeli towns near the blockaded enclave.

The Gaza Strip is ruled by Hamas, which the U.S. and much of the international community considers a terrorist group. Hamas wrested control of Gaza in 2007, sparking a 15-year blockade of the enclave by Israel and Egypt.

Islamic Jihad, a smaller Iran-backed organization whose leadership is based in the Syrian capital of Damascus, has led this round of violence. While Islamic Jihad has called for Hamas to join the battle, the latter has yet to do so, according to Israeli and Palestinian officials.

Security analysts said Hamas would have preferred to quietly continue benefiting from an Israeli move to reduce some restrictions on commerce in the impoverished Gaza Strip, even as the militants rebuilt their capabilities from last year’s devastating conflict.

“It seems that interests are winning out over principles,” said Daoud Shehab, an Islamic Jihad official.

“But we don’t have any kind of long-term strategy for the day after. Everyone just wants quiet,” Mr. Milshtein said.