Jan Holman said her horse, Bob, had been ‘such an important part of my life’ (Picture: CheshireLive/MEN)

A terminally ill woman was given a final chance to say goodbye to her horse and two dogs from her hospice bed.

Jan Holman, 68, was reunited with her horse, Bob, and two King Charles Spaniels, Monty and Rowley, for one last time after being moved to the Hospice of the Good Shepherd in Chester a month ago.

She had been riding Bob every day until a few weeks ago and described him as having been ‘such an important part of my life’.

Touching photographs show Bob nuzzling Ms Holman’s neck and lap through the courtyard doors as she feeds him carrots and bananas from her bed.

Others show Monty and Rowley being taken to see her at her bedside.

She was desperately missing them after being admitted to hospital unexpectedly six weeks ago without ever having the chance to say goodbye.

But after being moved to the hospice, staff there arranged to surprise her with the emotional reunion. 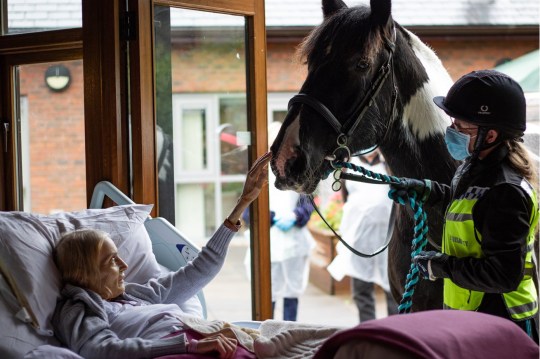 Ms Holman had been desperately missing Bob, a piebald Cob (Picture: Hospice of the Good Shepherd/MEN)

They wheeled her to the patio doors while staff at Bob’s stables walked him into the courtyard.

Ms Holman said: ‘I just can’t believe what the staff here at the hospice have done for me.

‘Until a few weeks ago I was still riding Bob every day and he is such an important part of my life, and I have missed him so much. 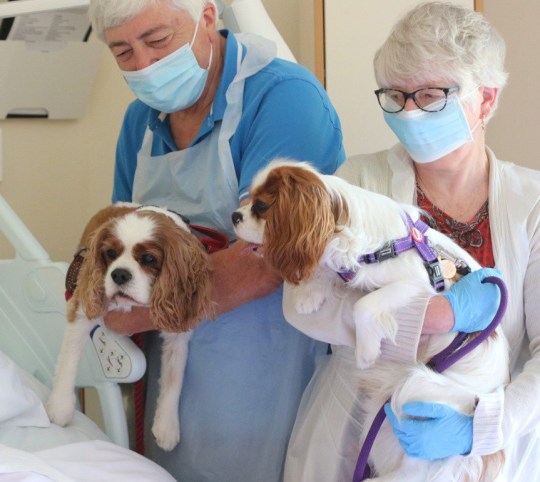 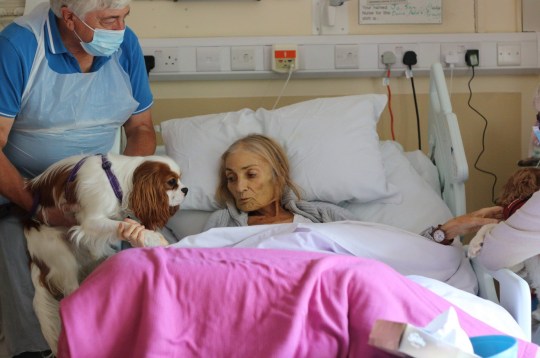 Ms Holman said she ‘just can’t believed’ what the staff did for her (Picture: Hospice of the Good Shepherd/MEN)

‘I knew that arranging for my dogs to visit was possible as we had a neighbour who was a patient at the hospice a few years ago and we were allowed to bring the dogs to visit her, but I just didn’t expect that they would ever be able to give me the chance to see Bob one more time.’

Her husband Dennis, who has been married to Jan for 46 years, said: ‘It was just such a relief once Jan was moved from the hospital to the hospice in Chester and we were able to have named visitors who could come and see Jan regularly.

‘However, we never imagined that we would be able to include our dogs Monty and Rowley and Jan’s horse Bob on the visiting list.’ 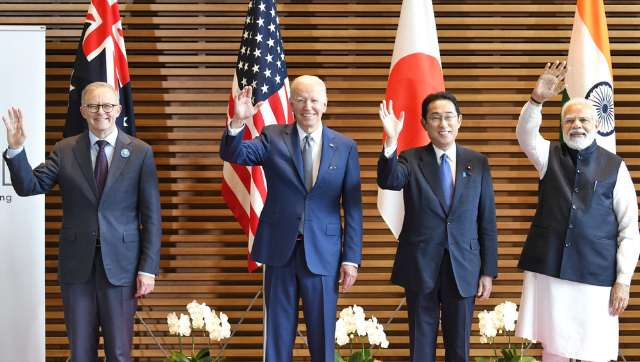