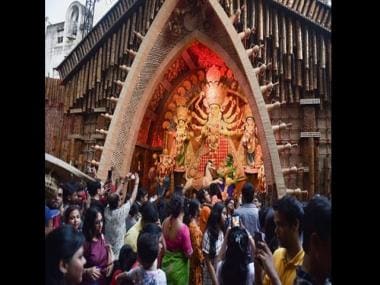 Ashtami, meaning ‘the eighth’, is dedicated to Goddess Mahagauri, one of the nine forms of Goddess Durga. This year, it will be celebrated on 24 October

Durga Puja festivities have begun in the country and people have been engaging in merriment in a safe manner in view of the coronavirus pandemic. The festival begins from Maha Sashti or the sixth day and ends with Maha Dashami, the tenth day.

Maha Ashtami or the eighth day is one of the most important days during the Navratri and there is some doubt over the exact timing of the Durga Maha Ashtami this year.

Usually the tithi or the day of the puja according to the Hindu calendar coincides with the Greogarian or English calendar dates. But this year, the tithi for Maha Ashtami begins a day early and hence both Ashtami and Nabami are going to fall on the same day.

Here is everything you need to know about Maha Ashtami 2020:

Durga Maha Ashtami is being considered to fall on 24 October in 2020. However the tithi for Ashtami has begun from 6.57 am on 23 October and the tithi will last till 6.58 am on Saturday, reported Times of India.

For the Bengali community who celebrate Durga Puja with great flair, Maha Ashtami sees the worship of the Chamunda incarnation of Goddess Shakti. It is believed that during Goddess Durga’s epic battle with Mahishasur, the goddess had killed demons Chanda, Munda, and Raktabija on Ashtami.

According to Drik Panchang, Durga Puja on Maha Ashtami begins with Mahasnan and Shodashopachar Puja.

Nine pots are kept as nine forms of the Goddess are worshipped as part of Ashtami puja. Also little girls are worshiped during Kumari Puja that also takes place on this day. One of the most significant aspects of Ashtami is the Sandhi Puja.

According to the religious texts, the last 24 minutes of Ashtami and first 24 minutes of Nabami form the Sandhi Khan or a holy period. It is considered to be the most important ritual of Durga Puja, as per the Panchang.