A road sign and a pole were among the items which Leahy mowed down (Picture: Avon and Somerset Police)

A Bristol drink-driver has been banned from the roads after being convicted by his own dashcam.

David Leahy, 56, was more than three times the legal limit for alcohol when he knocked over street signs, mounted kerbs, veered onto the wrong side of the road and collided with a parked car.

Footage from inside Leahy’s car showed his erratic driving in the Gloucester Road area of South Gloucestershire on August 12.

He was caught when a member of the public saw him strike a post and followed him back to his house in the Patchway area of Bristol.

They then called the police and Leahy was arrested.

At Bristol Magistrates’ Court he admitted driving while unfit through drink and he was given a 12-week suspended prison sentence.

He was also disqualified from driving for 30 months, fined £576 and ordered to pay costs of £213.

PC Wayne Carhart of Avon and Somerset police’s roads policing unit said: ‘The offender’s own dashcam footage clearly shows the lack of control he had over his vehicle and it’s frightening to see the risk he posed to other motorists, cyclists and pedestrians as he made his way home that day.

‘There’s absolutely no excuse for getting behind the wheel intoxicated; it can have devastating and life-changing consequences.

‘We’d like to thank the member of the public who called us and we’d urge people to follow suit and report any incidents where they see someone getting behind the wheel having been drinking or taking drugs – it could save a life. 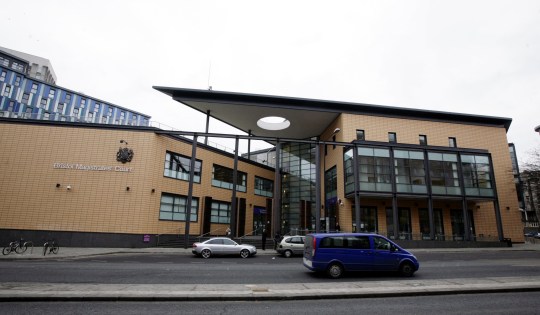 ‘Recent information published by the road safety charity Brake shows that even when someone is only just over the legal limit they are still six times more likely to be involved in a fatal collision than someone who has drunk nothing.’

If you know someone who is habitually drinking or abusing drugs and getting behind the wheel this can be reported online or by calling 101. If someone is currently driving under the influence of drink or drugs, always call 999.