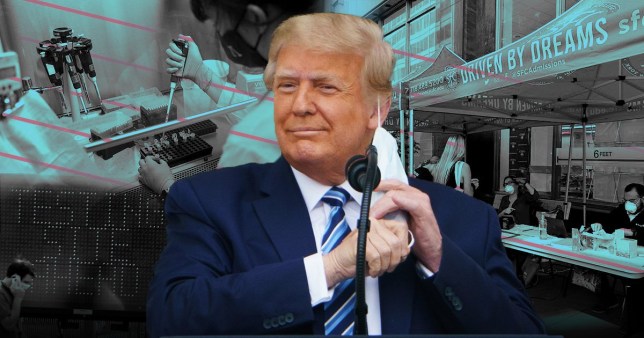 Donald Trump has insisted the coronavirus pandemic is coming to an end (Picture: ANGELA WEISS/AFP via Getty Images)

Donald Trump has declared the coronavirus pandemic is ‘ending’ despite cases in the United States soaring to record levels.

The US president played down the virus at three Pennsylvania rallies on Monday which saw thousands of largely maskless supporters gather.

The US has seen a 20% increase in new cases over the past week, with hospitalisations jumping 13% and daily deaths by 11%, according to the latest Johns Hopkins University data.

The seven-day average of new infections in the country has now reached its highest ever level, the Washington Post reported.

Cases are particularly growing in key battleground states in the north including Wisconsin, Iowa, Minnesota and parts of Michigan.

It comes as Joe Biden and Kamala Harris target Republican strongholds a week before the presidential election.

Mr Biden is travelling to Georgia on Tuesday, which has not supported a Democratic nominee for president since 1992, and later in the week will visit Iowa, which Mr Trump won comfortably in 2016. 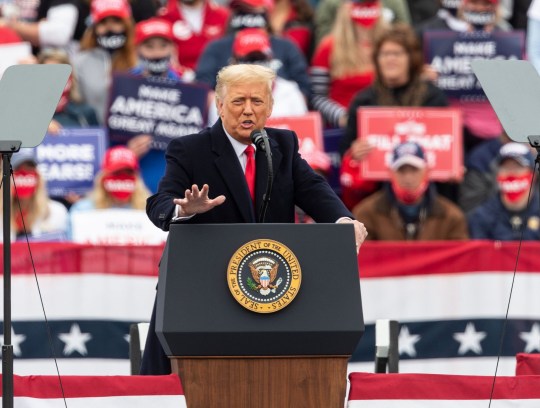 Ms Harris, Mr Biden’s vice presidential running mate, is heading to Arizona and Texas where Republicans have not lost an election for a statewide office since 1994.

The aggressive schedule is a sign of confidence by the Biden team, which is trying to stretch the electoral map and open up more paths to 270 electoral college votes.

But after Democrats flirted with Republican territory in 2016, only to lose those states as well as their traditional Midwestern strongholds, Mr Biden’s campaign is mindful of overreaching.

The former vice president will also visit Wisconsin, Michigan and Florida in the coming days.

Georgia, where Mr Biden will make two stops on Tuesday, has increasingly become a draw for Democrats in recent years, as turnout increases among black voters and the Atlanta suburbs tilt away from the Republicans. 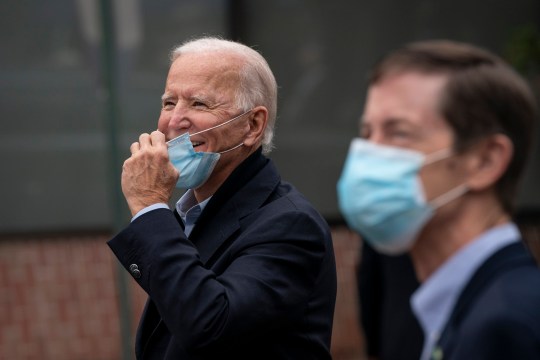 ‘If this was the Georgia of 2008, 2012 I think there’s no way we would have seen a Biden come this late,’ said Nse Ufot, chief executive officer of the New Georgia Project, which aims to increase voter registration, especially among young people and minorities.

‘It’s a loud signal and acknowledgement of Georgia as a battleground state.’

Mr Trump is staying focused on the so-called ‘blue wall’ states that he flipped in 2016: Pennsylvania, Michigan and Wisconsin, where he will return on Tuesday.

While Mr Biden rarely travels to more than one state per day, the president has maintained a whirlwind schedule, travelling from state to state and making the argument that he built a booming economy before the coronavirus pandemic upended it.

His latest swing could be a victory lap after the Senate approved the nomination of Amy Coney Barrett on Monday and gave conservatives a commanding, 6-3 advantage on the Supreme Court. 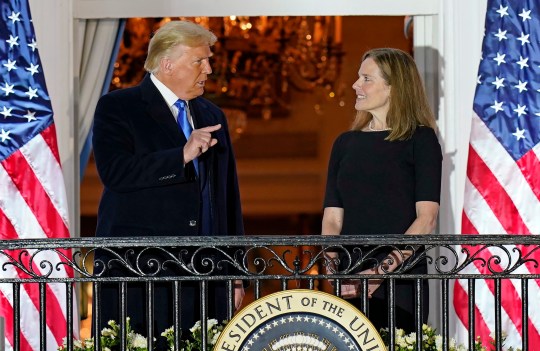 Donald Trump at the White House with Justice Amy Coney Barrett following the ceremony where she took the oath of office to be Associate Justice of the Supreme Court (Picture: EPA)

Both campaigns focused on Pennsylvania on Monday, with Mr Biden popping just over the border from his home in Delaware to greet a small group of supporters outside a campaign field office in Chester.

Mr Biden declared: ‘Bottom line is Donald Trump is the worst possible person to lead us through this pandemic.’

With more than a third of the expected ballots in the election already cast, it could become increasingly challenging for Mr Trump and Mr Biden to reshape the race.

Mr Biden is leading in most national polls and has an advantage, though narrower, in many key battlegrounds.