Apprehensive about Hong Kong’s future as the best place to do business in China and beyond, multinational firms are pulling up stakes, adding to uncertainty about the outlook for one of the world’s premier commercial cities.

Buffeted by political upheaval, an authoritarian crackdown by mainland China and the pandemic, global companies and professionals are heading to rival business cities such as Singapore, and to Shanghai, the Chinese commercial hub some see as a better place to profit from the nation’s vast economy.

Ever since the U.K. returned Hong Kong to China in 1997, the city’s leaders have billed the semiautonomous territory as “Asia’s World City”—an open society with a British-style legal system where foreign professionals could feel at home. Today, Hong Kong is becoming less open and more fused to the mainland economy.

Some companies, including banks and other financial institutions, still view Hong Kong as crucial to their China-focused business models and are digging in for the future. Others are eyeing the exit, concluding the city no longer holds the prospects it once did.

“Being in Hong Kong always used to be a no-brainer,” said

chairman of the European Chamber of Commerce in the city. “Now, for the first time, businesses are having discussions around, do we need to be in Hong Kong?”

In a survey of members of the American Chamber of Commerce in Hong Kong released last month, 42% of the 325 respondents said they were considering or planning to leave the city, citing uneasiness over China’s new security law and a pessimistic outlook of Hong Kong’s future.

Dozens of international companies have moved regional headquarters or offices from the city since 2019, government data show. That has contributed to the highest rate of commercial real estate vacancies in 15 years, with more than 80% of the vacant space surrendered by international companies, data compiled by

show. All told, more people—expatriates and locals—departed the business hub in 2020 than any year since the global financial crisis.

Dozens of international companies have moved regional headquarters or offices from Hong Kong since 2019.

, owner of Timberland, the North Face and other brands, said it was shutting its 900-person Hong Kong office after 25 years in the city. Japanese videogame maker Sony Interactive Entertainment has moved regional executives to Singapore. European luxury-goods company

also said it was relocating some staffers from its Hong Kong headquarters.

Hong Kong boosters predict that, once the pandemic lifts, the city will emerge stronger as its businesses profit from deeper integration with the mainland. Pessimists see it gradually atrophying around a few core industries useful to China, such as finance.

said the majority of foreign firms still believe that Hong Kong is the place for doing business, encouraged by growing opportunities with major Chinese cities. “We will continue to monitor the situation and provide the best help we can offer,” he said at a recent press conference, referring to the American Chamber of Commerce survey.

Under China’s long-term plan, Hong Kong will become part of a 70 million person “greater bay area” economic zone that includes the neighboring tech city of Shenzhen and the gambling mecca of Macau.

who runs Hong Kong’s investment promotion bureau, InvestHK, said that arrangement will become the economic engine for growth and a major business opportunity in the coming years.

He said the biggest issue for Hong Kong is getting through the Covid epidemic, and that China’s new security law for Hong Kong hasn’t had a major impact on business. “Each business will make its own decision,” he said. “But the vast majority don’t see it as a risk.”

Hong Kong once pitched itself as a bridge between East and West. Now, for some businesses, Hong Kong is no longer global enough to serve as a regional headquarters. For others focused on doing business in China, the city isn’t as tapped in to the mainland economy as Shanghai. 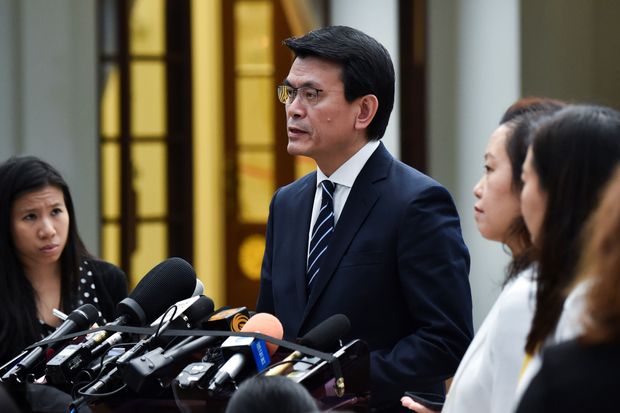 Denver-based VF is moving the Hong Kong positions responsible for its China sales and marketing to Shanghai, where they will be nearer the stores and giant online retailers crucial to its business. Employees responsible for managing its regional network of manufacturers and suppliers will relocate to Singapore, a Chinese- and English-speaking country of 5.7 million people with a strong business infrastructure. Although Singapore’s laws also limit free speech, it has an established free-market approach to business.

VF said its move reflected changing economic trends and efforts to better serve consumers, not China’s intervention in the city.

L’Oreal said it is building up in Singapore and Shanghai as it reduces its presence in Hong Kong. The restructuring, it said, is designed to give greater coherence to its business by creating a Southeast Asia, Middle East and North Africa zone run from Singapore, and a North Asia zone run from Shanghai.

Sony Interactive and Moët said they have moved some employees to Singapore. Both declined to comment further on their moves.

Hong Kong’s transformation accelerated in 2019 with mass demonstrations against Beijing’s intervention in the island that was meant to largely govern itself under a concept known as “one country, two systems.” Months of clashes between police and students shook the city’s reputation as a safe and stable place to do business.

What do you think of Hong Kong’s future as a global business city? Join the conversation below.

Beijing cracked down on the protests in June 2020 and pushed through a national security law that granted the Chinese government power to intervene in Hong Kong’s legal system, while authorizing its secret police to enforce vague statutes such as against foreign collusion. On Friday, thousands of people defied a huge police presence and threats of jail to commemorate the 1989 Tiananmen Square massacre.

said it was deleting its Hong Kong-based backup servers and moving them to Singapore to protect user data.

Google dropped plans to connect Hong Kong and the U.S. with undersea data cables after U.S. security officials signaled opposition to the plans.

At Asian Tigers Hong Kong, a relocation firm serving international executives, moves into Hong Kong have declined 50% since 2019, while moves out increased by 30%, said Chief Executive

an American who moved to Hong Kong in the 1980s.

“I saw a lot of longtime Hong Kong stayers who were leaving, people like me who came out for a usual three-year stint and 30-years later are still here, loving it, married with kids, owning businesses,” Mr. Chipman said. “So even some of those people are saying, ‘Wait a minute, something’s going on here. Maybe it’s time to leave.’ ”

Some 40,000 more Hong Kong residents departed the city in 2020 than those who entered intending to reside there, government figures show. All told, Hong Kong’s population of about 7.5 million shrank by 46,500 in 2020—the second contraction since it was returned to China. 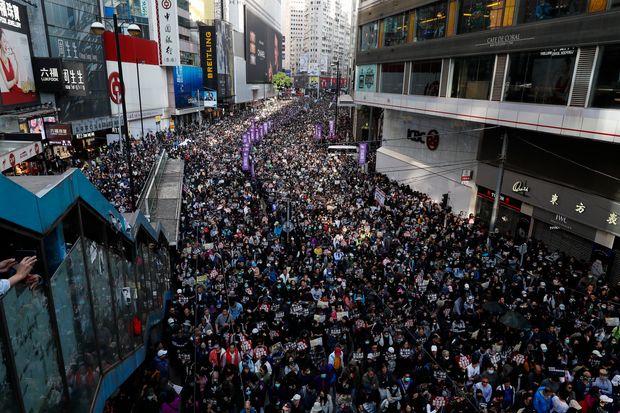 Prodemocracy protesters marching in Hong Kong in 2019, before Beijing cracked down on the protests.

an Austrian mother of one who moved to Hong Kong 15 years ago to set up a specialty fabrics and stationery business, left in November. While the 2019 unrest disrupted her business, the 2020 national security law, she said, was the last straw. She packed up her business and moved to Singapore.

The law, she said, “was a clear sign from China that they are taking control of Hong Kong now, and everything will get more controlled from that point out. We no longer felt safe.”

British authorities have opened the doors for local holders of pre-handover U.K. passports to immigrate permanently to the U.K., and they estimate more than 300,000 Hong Kongers—about 4% of Hong Kong’s total population—may come over five years.

Hong Kong boosters predict companies that closed offices will be replaced by other firms moving in, including from mainland China. In the 12 months ending June 3, 2020, the latest information available, mainland Chinese companies opened 63 new regional headquarters and offices in Hong Kong, an increase of 12% from the year-earlier period. During the same period, U.S. companies—the biggest international presence in Hong Kong—closed 45 headquarters and offices, or 6% of their total, government figures show.

Hong Kong remains attractive to the financial-services industry. With its modern markets, freely convertible currency and connections to the mainland, Hong Kong is unrivaled when it comes to financing China. Mainland China’s newly minted superrich are an attractive target for Hong Kong-based wealth-management firms. A string of stock offerings by Chinese tech giants have put the Hong Kong exchange in the No. 3 spot globally for such listings.

PLC said in February it would invest $6 billion in its Hong Kong-based Asia business, of which Hong Kong is by far its most lucrative market.

demonstrated support for Beijing’s national-security law after a Hong Kong politician said the bank could be punished unless it did. Later that year, it froze accounts of a prominent Hong Kong democracy activist who had fled the city.

told them that the bank didn’t drop customers or freeze accounts for political reasons, and reiterated the bank’s commitment to Hong Kong. HSBC declined to comment for this article.

Some large banks, although optimistic about continuing to do business in Hong Kong, are quietly running contingency scenarios to ascertain what they would do if they lost access to their Hong Kong infrastructure and had to operate out of another city, people familiar with such plans said.

a foreign-born real-estate developer who has advised Hong Kong’s current government and years ago gave up his Canadian passport for a China-issued one. “Yes. I still do whatever I want and say whatever I want, as long as I choose not to be an antagonist.”

Corrections & Amplifications
Hong Kong’s currency is freely convertible but is pegged to the U.S. dollar. An earlier version of this article incorrectly said the Hong Kong dollar was free-floating. And Sandra Boch, an Austrian mother of one who moved to Hong Kong 15 years ago to set up a specialty fabrics and stationery business, left in November. An earlier version of this article misidentified her nationality, the number of her children and the month she left Hong Kong. (Corrected on June 7)

Write to John Lyons at john.lyons@wsj.com and Frances Yoon at frances.yoon@wsj.com