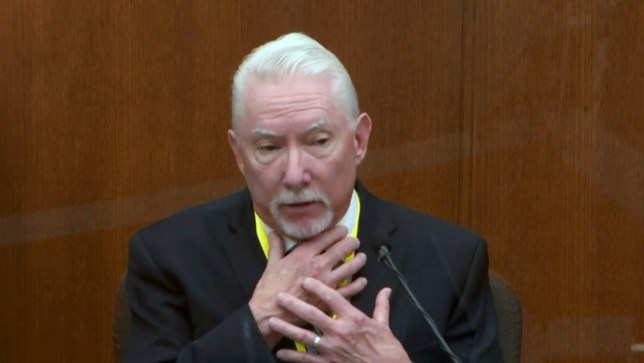 Barry Brodd, a former police officer, on Tuesday countered what the prosecution’s witnesses said in the first 11 days of Chauvin’s trial in the death of Floyd.

‘I felt that Derek Chauvin was justified, and was acting with objective reasonableness, following Minneapolis Police Department policy and current standards of law enforcement, in his interactions with Mr. Floyd’, said Brodd.

Brodd, who has nearly three decades of law enforcement experience, cited the 1989 Graham v Connor Supreme Court case in which justices ruled that an officer’s use of force must be ‘objectively reasonable’.

However, ‘police officers are often forced to make split-second judgments – in circumstances that are tense, uncertain and rapidly evolving – about the amount of force that is necessary in a particular situation’, Brodd noted.

Brodd not only said that Chauvin’s use of force was appropriate for how much Floyd was resisting, but also that officers could justifiably have used even more force on him.

‘Police officers don’t have to fight fair’, he said. ‘They’re allowed to overcome your resistance by going up a level’.

Brodd added: ‘It’s easy to sit and judge in an office on an officer’s conduct; it’s more a challenge to again put yourself in the officer’s shoes to try to make an evaluation through what they’re feeling, what they’re sensing, the fear they have and then make a determination’.

Prosecutors showed video of Floyd saying, ‘everything hurts’, and in the prone position saying he could not breathe. Brodd said that Chauvin and the officers were justified in restraining Floyd on his stomach because it would have been hard to move him on his side given he was against a cop car and on the street with vehicular traffic.

‘Those were relatively valid reasons to keep him in the prone’, Brodd said.

Brodd did agree with prosecutors that a reasonable police officer would use more or less force based on the amount of the suspect’s resistance, and would consider if the subject had stopped breathing or lost a pulse.