More than 50 homes were evacuated in the Normanton area (Pictures: BPM Media)

A man has been arrested on suspicion of making or possessing an explosive substance in Derby, after more than 50 homes were evacuated in the area.

The military was scrambled after a number of suspicious items were found at a property in King Alfred Street, Normanton, on Sunday morning.

The man arrested remains in police custody, but there is no indication it is a terror-related incident.

Derbyshire Police said in a statement: ‘The Explosive Ordnance Disposal team are on site and a number of houses are currently being evacuated in King Alfred Street, Monk Street and Wolfa Street.

‘Residents are asked to stay away from the area and those evacuated will be contacted when it is safe to return to their homes.’

In a later update, the force said the incident is likely to continue into the evening as officers work with bomb squad colleagues.

There is no indication as to when residents will be back in their homes.

It continued: ‘The force is liaising with Derby City Council to help those who require temporary accommodation while they are currently unable to access their homes.

‘Residents who have been evacuated will be contacted once it is safe to return.’ 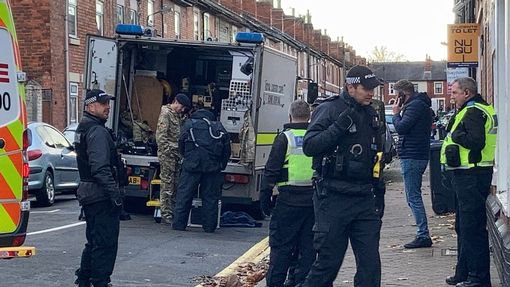 A bomb disposal unit vehicle was sent to the street (Picture: BPM Media) 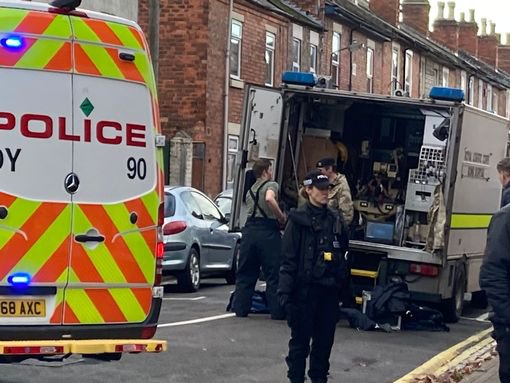 There is no indication the incident is terror-related (Picture: BPM Media)

Chief Superintendent Tracy Lewis said: ‘I would first like to thank everyone for their support and understanding during today’s incident.

‘At the forefront of our minds is the safety of all those in the area as well as staff at the scene, and I know they are working hard to allow people back as quickly as it is safe to do so.

‘I am also aware that people will be concerned due to the evacuation and I would like to reassure them that there is no indication at this time that this is a terror-related incident.

‘A man has been arrested on suspicion of making or possessing an explosive substance and officers from the force are continuing their enquiries into the incident.

‘I would urge anyone who has any information that may be of interest to the investigation team to contact the force.’