Labour has claimed Boris Johnson delayed putting India on the red list because he wanted a photo call with his Indian counterpart Narendra Modi (Picture: Rex/Reuters)

The Delta strain of coronavirus should be renamed the ‘Johnson variant’ because of the Prime Minister’s ‘lax’ border measures, Labour has said.

The party is blaming Boris Johnson’s ‘negligence and incompetence’ for the more infectious strain first identified in India becoming dominant in the UK – and the subsequent delay in fully lifting Covid restrictions in England.

Shadow Home Secretary Nick Thomas-Symonds will argue that the PM refused ‘to take tough decisions’ in a speech about UK Covid borders policy on Tuesday.

Labour has long been arguing for stricter border measures and claims that the delay in putting India on the red list was partly due to the PM wanting to have his ‘photograph taken’ with the Indian leader Narendra Modi.

But on Tuesday morning Michael Gove rode to Mr Johnson’s defence, suggesting the idea was ‘total rubbish’ and ‘for the birds’.

In the speech, Mr Thomas-Symonds will emphasise that Britain being an island nation means that, like New Zealand and Australia, ‘our border protections should have been one of our natural strengths throughout this pandemic’.

He will cite ‘staggering’ figures showing that 20,000 passengers who could have been infected with the Delta variant arrived from India between April 2 and April 23.

The intervention comes after shadow health secretary Jonathan Ashworth blamed the delay in putting India on the red list on Mr Johnson’s ‘complacency’ on Monday, when he said that the PM ‘wanted a photo call with Prime Minister Modi’.

Mr Ashworth added that ‘our borders were secure as a sieve’.

Labour will force another vote in the House of Commons on the issue – and as part of the vote the party is calling for the amber travel list to be scrapped.

Commenting on Mr Johnson’s announcement on Monday evening – which confirmed that unlocking would be delayed by four weeks – Mr Thomas-Symonds is expected to say: ‘The delay is happening because a new variant first identified overseas was allowed to take hold in this country.

‘There is one reason and one reason only that this happened: lax border measures by Conservative ministers.

‘They have allowed the Delta variant, first identified in India, to take hold here.’

He will add: ‘Let’s call it what it is. Let’s put the blame where it should lie.

‘In this country – it’s the Johnson variant.

‘The Prime Minister’s negligence and incompetence, his refusal to take tough decisions have left Britain facing weeks more of restrictions – and yet more uncertainty.

‘It is a crystal clear metaphor for how Boris Johnson and his government work: they spend so much time posturing and posing over being tough at the borders, yet when it was a matter of keeping our country safe and the variants out, they failed. 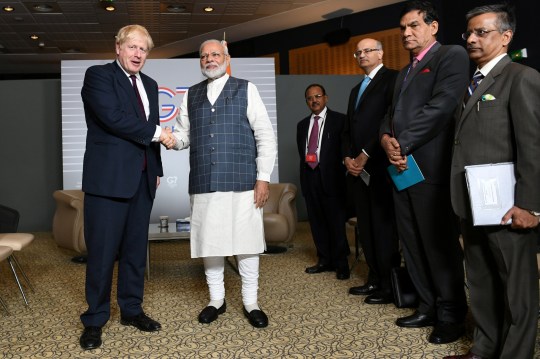 ‘People across the country have every right to be angry about being let down so badly.’

On the timing of putting India on the red list, he is expected to say: ‘Pakistan and Bangladesh were added on 9 April.

‘Yet the Prime Minister waited 14 days to add India.

‘It was a fortnight of failure and we are all suffering the consequences.’

Wembley to host 45,000 fans and full house at Wimbledon despite ‘Freedom Day’ delay


He will add that Civil Aviation Authority figures suggest that at least 20,000 passengers who could have been infected with the Delta variant arrived from India between 2 and 23 April – branding the figure ‘staggering’.

India is now on the UK’s ‘red list’ – meaning arrivals from the country must quarantine in a hotel at their own expense, but was previously on an amber list, which asks passengers to self-isolate at home instead.

Mr Gove told Sky News: ‘We closed our borders, we put India on the red list, at the earliest appropriate opportunity, on the basis of all the evidence that we had.

‘In fact, we put India on the red list before we knew that this Delta variant was a variant of concern.’