TEL AVIV—Israel’s military said it killed six senior Hamas commanders Wednesday as it intensified its airstrikes targeting the militant group in Gaza, in the heaviest exchange of fire since the two sides fought a war in 2014.

Israeli strikes and Hamas rocket fire have so far killed 56 Palestinians, including 14 children, and six Israelis, according to Palestinian and Israeli officials. Prime Minister

The military said the operation, conducted jointly with Israel’s internal security services, simultaneously killed four top Hamas commanders in a strike on a Hamas base. Those killed included the head of Hamas’s cyber command, head of research in its munitions department and the chief engineer in its munitions department. Two other senior Hamas intelligence and weapons productions officials were also killed in strikes on Wednesday.

Hamas, an Islamist militant group that seized control of the Gaza Strip in 2007, confirmed the deaths of the six senior officials.

Israel’s military also said a soldier was killed by a Hamas antitank missile near the Gaza border fired Wednesday morning.

As tensions mount over the contested city of Jerusalem, which sparked the current cross-border violence, protests also broke out in Arab communities across Israel with some rioting in mixed cities. Israel’s government declared a state of emergency in one city and its military redeployed troops to contain the fallout. 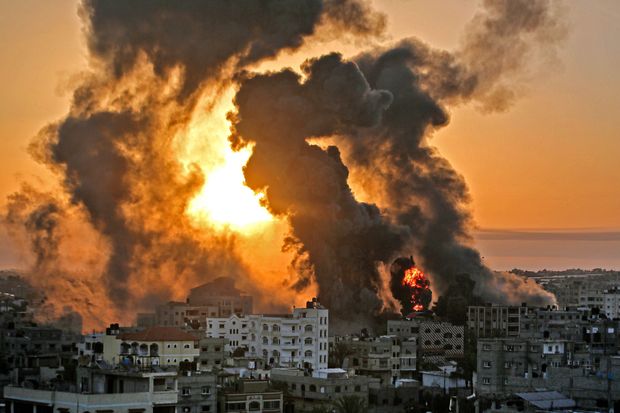 A fire rages in Khan Yunish following an Israeli airstrike on Wednesday. 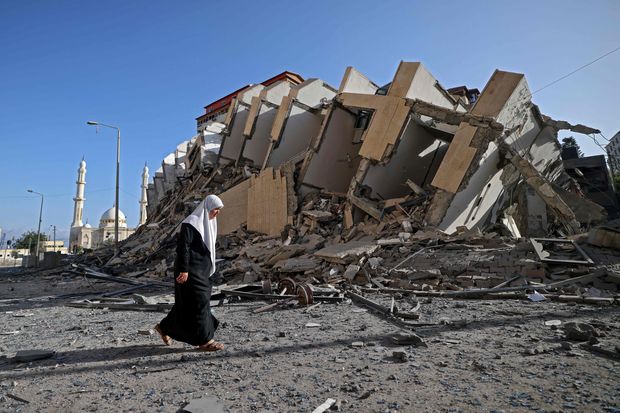 Gaza City on Wednesday. Israel has struck over 500 targets in Gaza since Monday.

Since Monday, Israel has struck over 500 targets in Gaza, including overnight raids targeting what Israel’s military said were senior Hamas and Palestinian Islamic Jihad officials, some inside their houses. The attacks have upended life for millions of people in Gaza and reduced swaths of the city—about twice the size of Washington, D.C.—to rubble.

Jamileh Tawfiq, 24, who lives in Gaza City, said bombing raids Wednesday morning filled her apartment with suffocating smoke and the screams of her nieces. “All of a sudden, Gaza has turned into a war zone,” she said. “We’re experiencing the most terrifying and uncomfortable kind of silence between each bombing.”

Hamas has launched more than 1,000 rockets toward Israel, including 200 that fell short and landed inside Gaza, according to

an Israeli military spokesman. Others have been intercepted by Israel’s Iron Dome System. Col. Conricus said Israel sent two infantry brigades and an armored brigade to the border to prepare for possible ground operations. “No specific orders given yet as to what to do on the ground but…preparing for various scenarios,” he said. 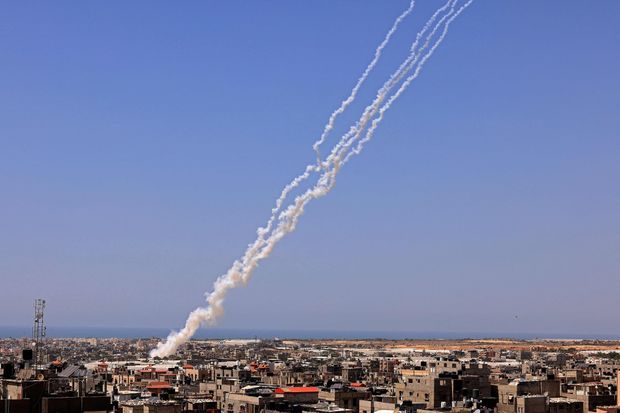 Rockets are launched towards Israel from Rafah, in the south of the Gaza Strip, on Wednesday. 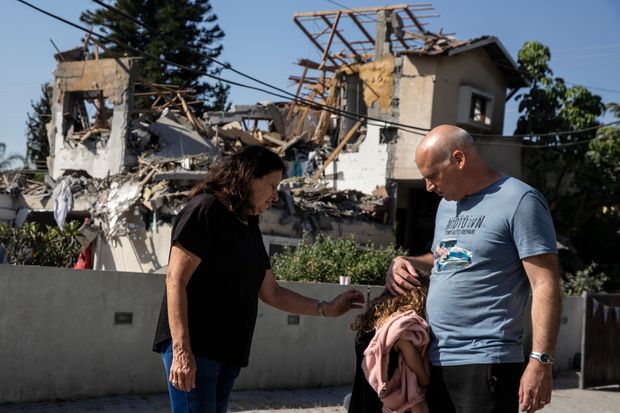 A house damaged by a rocket fired from the Gaza Strip, in Yehod, on Wednesday.

Israel has also targeted high-rise buildings it says Hamas is using as military sites, causing several structures to collapse. Col. Conricus said Israel’s military fired warning shots and called people in the buildings to make sure they could evacuate before the attacks took place.

Ahmad Alsaaym, the owner of one of the buildings that was hit, said he was able to leave before the strike but escaped with little but his own life. “What do I say, I lost my house, business and everything I have in front of my eyes,” he said. The losses included new clothing that he had bought his children for Eid al-Fitr, which marks the end of the holy month of Ramadan. “I’ll buy new ones for them today and we will celebrate Eid and our victory with getting Jerusalem and Palestine back,” he said.

The barrages temporarily caused air traffic to be diverted away from Ben Gurion International Airport on Tuesday evening and a pipeline belonging to an Israeli state-owned energy company was hit.

Officials said they were bracing for more rockets aimed at Tel Aviv and its surroundings on Wednesday afternoon local time, with restaurants and shops closing early and the streets largely empty.

Israel and Hamas have fought three wars since the militant group seized control of the Gaza Strip in 2007. The two sides have seen several escalations since spring 2018 that have almost developed into full-blown conflict. 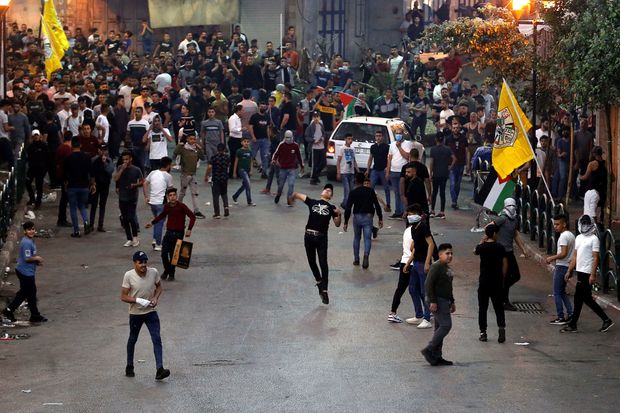 Protests have broken out in Arab communities across Israel. 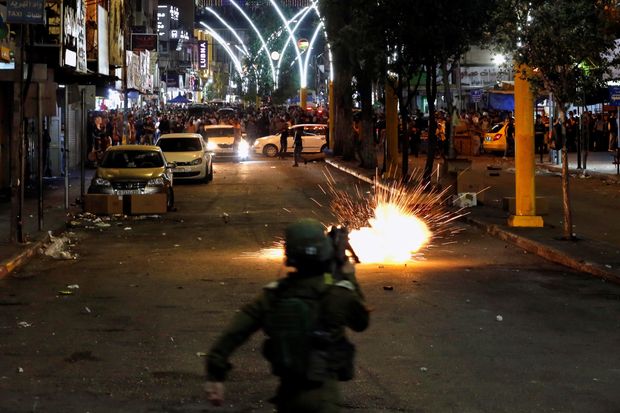 Israeli forces fire a grenade as Palestinians take part in an anti-Israel protest in Hebron on Tuesday.

The current fighting stems from frustrations old and new. Palestinian grievances arose over what they see as years of efforts by Israel to push them out of Jerusalem, fanned by a pending court decision on evictions. Clashes have erupted over access to the Al Aqsa Mosque during Ramadan, heightened by a heavy handed Israeli police response that used stun grenades and other riot dispersal methods to respond when they said people at the site were throwing stones at them.

These tensions are now spreading inside the country, as Israeli police clash with Arab Israeli demonstrators in cities nationwide.

Two Arab Israelis were killed by rockets overnight in the city of Lod, near the airport, where large violent riots have taken place. Violent demonstrators there set fire to a synagogue and burned vehicles, prompting Mr. Netanyahu to deploy 16 border police platoons. The police units there have cordoned off the city to try to gain control.

Israel arrested 150 suspects in violent demonstrations across the country overnight Tuesday, including in Wadi Ara in northern Israel, Lod and elsewhere, Micky Rosenfeld, an Israeli police spokesman, said. In Akko, demonstrators set fire to a popular restaurant and hotel. Houses, vehicles and streets have been damaged in clashes between Israeli Arabs and police in cities like Lod, where different communities mix. 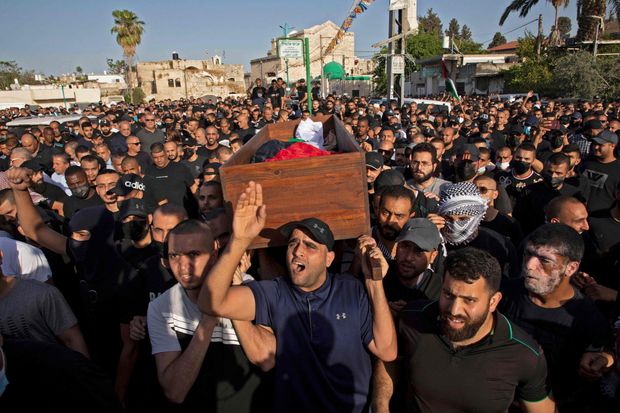 Arab Israelis attend a funeral in Lod on Tuesday.

In Lod, scores of masked Arab residents wandered the city setting cars on fire, throwing stones, shooting fireworks and setting a synagogue on fire. Some Arab demonstrations waved Palestinian flags and chanted “Allahu akbar,” Arabic for God is great. The city’s Jewish mayor said on live television that he had lost control of the city and asked the government to bring in the military to restore order.

Jamal Abu Siyam, an Arab member of the Lod city council, said the riots grew out of anger from recent visits to Lod by hawkish Jewish Israelis.

“It’s a direct result of incitement,” he said Wednesday on Army Radio, but added that he believes the clashes will dissipate quickly. “We are not in a civil war right now. In a day or two it will finish,” he said.

—Anas Baba in Gaza City contributed to this article.