The levels of PM2.5, which can lead to premature deaths from heart and lung diseases, were 329 microgram per cubic meter in Delhi-NCR at 7 pm, above the emergency threshold of 300 g/m3 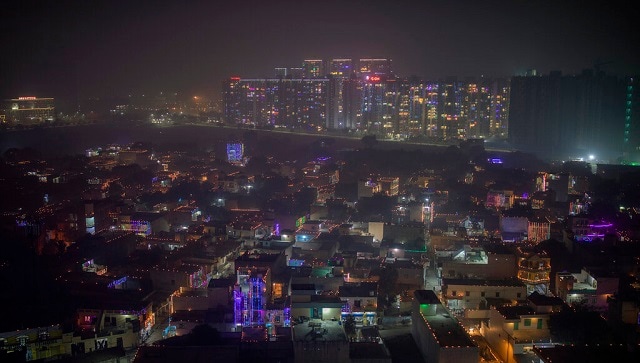 A layer of smog envelops the skyline as residential buildings are decorated with colorful lights during Diwali on Saturday. AP

New Delhi: Delhi recorded the worst air quality in four years on the day after Diwali as pollution levels in the city and its suburbs crossed the “emergency” threshold on Sunday due to the combined effect of stubble burning and firecrackers.

However, higher wind speed — up to 25 kilometers per hour — and light rainfall under the influence of a fresh Western disturbance brought some relief.

The air quality had turned “severe” on Saturday evening with stubble burning accounting for 32 percent of Delhi’s PM2.5 pollution, but firecrackers emissions and calm winds made the situation even worse.

The levels of PM2.5, which is about three percent the diameter of a human hair and can lead to premature deaths from heart and lung diseases, were 396 microgram per cubic meter (g/m3) in Delhi-NCR at 6 am, above the emergency threshold of 300 g/m3.

According to the Graded Response Action Plan (GRAP), the air quality is considered in the “severe plus” or “emergency” category if PM2.5 and PM10 levels persist above 300 g/m3 and 500 g/m3 for more than 48 hours.

As per Delhi Pollution Control Committee data, hourly PM10 concentrations soared to 1,636 g/m3 by 1 am at Punjabi Bagh and 1,937 g/m3 by midnight at Jahangirpuri.

A large number of people burst crackers across the National Capital and its suburbs on Saturday night, flouting the ban imposed by the National Green Tribunal.

The tribunal had on Monday imposed a total ban on sale or use of all kinds of firecrackers in the National Capital Region (NCR) from 9 November midnight to 30 November midnight, saying “celebration by crackers is for happiness and not to celebrate deaths and diseases”.

Delhi recorded a 24-hour average AQI of 337 on Diwali last year (27 October), and 368 and 400 on the next two days. Thereafter, pollution levels remained in the “severe” category for three days on the trot.

In 2018, the 24-hour average AQI (281) on Diwali was recorded in the “poor” category. It deteriorated to 390 the next day and remained in the “severe” category on three consecutive days thereafter.

According to India Meteorological Department, Delhi-NCR witnessed light rain on Sunday and higher wind speed under the influence of a fresh Western Disturbance which aided in the dispersion of pollutants.

The maximum wind speed was around 25 kilometers per hour on Sunday. It will be around 12 to 15 kmph on Monday — which will be favorable for dispersion of pollutants, Kuldeep Srivastava, the head of the IMD’s regional forecasting centre, said.

However, the boundary layer wind direction has changed to easterly which is not favourable for stubble fire-related intrusion.

Stubble fires have reduced to around 350 on Sunday compared to around 2,586 a day before. The share of farm fires in Delhi’s PM2.5 was around 4 per cent on Sunday.

The Air Quality Early Warning System for Delhi also said the situation is likely to improve significantly on Monday.