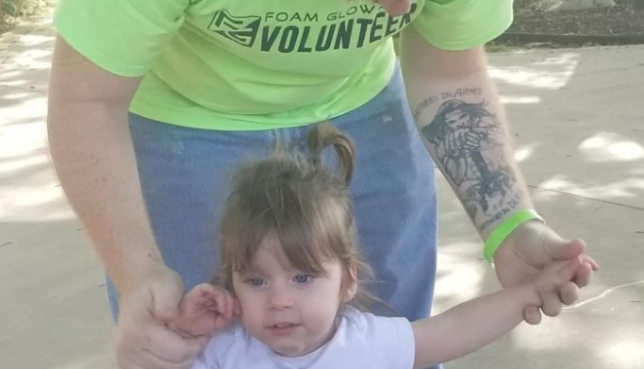 Carmen Haggard, 3, died after falling through an icy pond. Her dad Josh ran to save her, but fell through another patch of ice too far away from his child (Picture: GoFundMe)

A father had to watch his three year-old daughter with autism drown in a frozen pond after the ice gave way beneath him as he ran to save her. Josh Haggard ran towards his daughter Carmen after realizing she had run out onto the solidified body of water in Olmstead Township, Ohio, on Wednesday afternoon.

But the ice gave way beneath Josh while he was too far from Carmen to try and save her. The little girl drowned, with police arriving at the scene to find Josh still struggling to get himself out of the spot he had fallen into.

An Olmstead Township Police Department spokesman said: ‘The male in peril was attempting to rescue his daughter who had wandered out onto the ice and fallen through in a separate location.’

The cop who tried to rescue Josh Haggard also fell through the ice, with both men later pulled from the water by a third officer. Carmen was pulled unresponsive from the water around the same time. She received CPR and was taken to a local hospital, but was pronounced dead shortly afterwards.

Josh received treatment in the wake of the accident, with the cop who fell through the ice while trying to save him escaping any injury.

A GoFundMe setup by Josh’s cousin Nicole Eck to raise money for Carmen’s funeral explained the circumstances of the tragedy. It said: ‘My cousin Josh endured an awful tragedy with his daughter Carmen.

‘Carmen is 3 she is autistic and wondered off to the family’s pond while Josh was trying to get to her she fell through as so did he.

‘EMS arrived and rushed them both to the hospital for treatment Josh is ok but unfortunately Carmen did not make it.’