Does the windmill arm hack for jab side effects actually work? (Picture: TikTok)

Performing windmills with your arm to get rid of numbness after a coronavirus jab has a ‘placebo effect at best’, scientists have said.

They hope it will alleviate the sore arm symptom which many people are experiencing post-jab – and perhaps be a cool new move to bust out on the dancefloor when nightclubs finally reopen.

But is there any medical benefit to be gained or are people turning themselves into a human windmill in vain?

There has been no known controlled trial on the effect of windmills on reducing post-jab arm pain.

But Dr Peter Chin-Hong, a professor of medicine at the University of California, appreciated the theory behind the idea.

He told SFGATE: ‘It actually does make sense to me as an infectious disease doctor.

‘Basically, what they’re doing is increasing the blood supply to the arm that’s vaccinated.’ 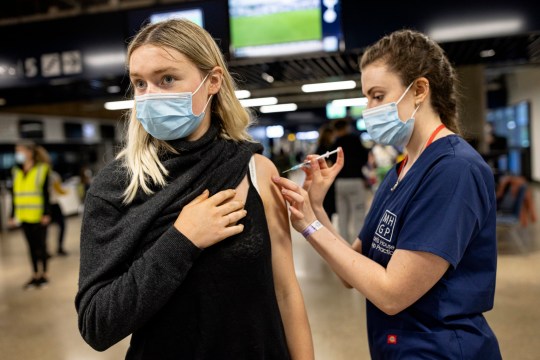 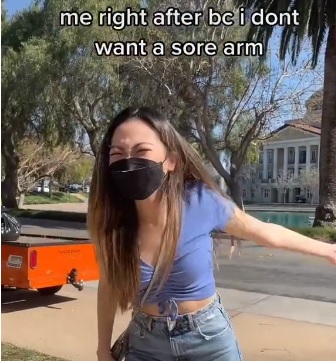 Tiktok user Hannah Lee is a believer in the windmill idea (Picture: TikTok/@hannah_leeee)

He said the soreness occurs because the vaccine is injected directly into muscle.

To get it to diffuse into the bloodstream, and begin recovery, blood flow to your arm needs to increase and you can do this by moving it around.

But others took a different view.

Professor Beate Kampmann, director of the Vaccine Centre at the London School of Hygiene and Tropical Medicine, told the Guardian: ‘It’s harmless, looks very silly and won’t do anything.

‘The sore arm does not actually happen immediately as the immune response has not yet happened, and not everyone gets it either.

‘Let people wave their arms if it makes anyone feel better – it really is a tiny quick injection on the day.

‘We give vaccines to children all the time and they are just fine.’

Adam Finn, professor of paediatrics at the University of Bristol added: ‘I doubt it is harmful – or helpful beyond any placebo effect, which could be substantial.’

Even if the medical basis for lasting health benefits is not there, Professor Azeem Majeed of Imperial College London suggested it could be having a positive impact on uptake rates.

He said: ‘If it raises awareness of the jab and makes it seem like a joyful, playful thing, then that’s a very good outcome to the dance.’

A spokesperson for vaccine-maker AstraZeneca told the newspaper they were ‘certainly not aware of it being helpful’ but added they were ‘loth to rule anything out’ in terms of any positive gains.

Pfizer and Johnson & Johnson both said there was insufficient scientific evidence for them to comment.