Omicron has been classed as a Variant of Concern by the World Health Organisation (Picture: Getty)

Two cases of the highly infectious Omicron coronavirus variant have been detected in the UK.

Health Secretary Sajid Javid said there would be targeted testing in the areas where the cases were found – in Chelmsford and in Nottingham.

The two cases are ‘linked’ and the individuals are now self-isolating, along with their households.

‘This is a real reminder that this pandemic is far from over,’ he added.

The Omicron strain – first detected in southern Africa – was labelled a variant of concern by the World Health Organisation yesterday.

WHO said early evidence showed it had a high chance of reinfection. 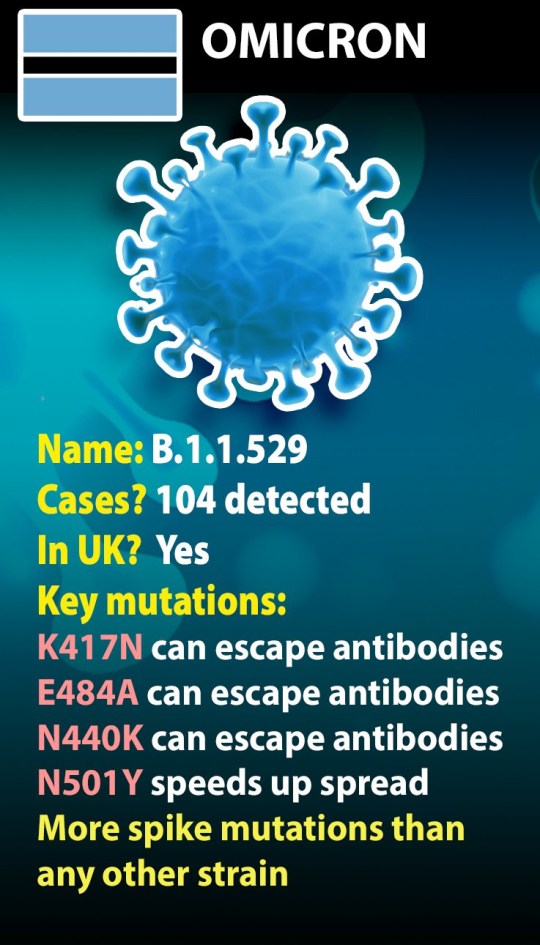 Mr Javid said four more countries are being added to the travel ‘red list’ from 4am on Sunday: Angola, Mozambique, Malawi and Zambia.

South Africa, Botswana, Lesotho, Eswatini, Zimbabwe and Namibia were placed on the list earlier this week.

Mr Javid said he found out about the Omicron cases ‘late last night’, when he was contacted by the Health Security Agency.

In a warning that fresh measures may be on the way, he said: ‘We’ve been always very clear that we won’t hesitate to take further action if that is what is required.’

Omicron was first reported to the WHO from South Africa on November 24.

It has also been identified in Botswana, Belgium, Hong Kong and Israel.

More suspected cases were reported in Germany and the Czech Republic on Saturday.

South Africa says it is being ‘punished’ instead of applauded for discovering the variant.

The UK, EU and US have all banned travel to southern African countries as details of the spread emerged.