The changes will come into force from July 19 (Picture: Getty)

Nicola Sturgeon has announced that Scotland’s coronavirus restrictions can be eased as planned on Monday, but with ‘caution’.

The whole country will move to Level 0 from July 19, but she said there would be certain modifications.

‘This is intended to ensure that our pace of easing restrictions is sensible in light of the challenge we continue to face from the Delta variant,’ she said.

Mandatory face masks will also remain ‘in all likelihood for some time to come’.

The First Minister previously said the move depended on the latest case numbers, hospital admissions and the vaccination rollout.

Level 0 would reduce the two-metre distancing rule to one metre in indoor public spaces.

For example, up to eight people from up to three households will be able to meet indoors.

The 11pm closure time for pubs operating indoors will also be scrapped and will now be midnight. Originally, local licensing conditions had been planned to apply, but Ms Sturgeon said still having a closing time would make for lower risk.

Nightclubs and adult entertainment will have to remain shut.

She had hoped to remove all limits on the number of people who could gather outdoors, but Ms Sturgeon now said the limit would be up to 15 people from up to 15 households.

A gradual return to the office had been planned from Level 0, but Nicola Sturgeon said this would now be postponed until at least August 9, which she said would help to contain transmission.

She said that she hoped the country could move beyond Level 0 from that date, but that would be decided later on based on the data.

‘We are no longer in lockdown […] but the gradual approach we are taking means that sensible precautions will remain in place while we make even more progress on vaccination,’ she said.

July 19 is expected to be the date when all Scottish adults will have been offered their first vaccine dose as well as being three weeks on from over-50s being double jabbed.

The Scottish Parliament had been recalled from the summer recess for Ms Sturgeon’s announcement.

Last week she stressed that any additional lifting of coronavirus rules would require ‘care and caution’ due to the record number of coronavirus cases in Scotland. 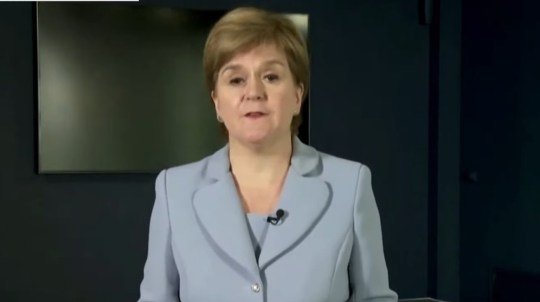 On Monday, the latest Covid-19 statistics showed 2,134 coronavirus cases were recorded in the past 24 hours, but no deaths.

A total of 469 people were in hospital on Sunday with recently confirmed Covid-19, up 24 on the previous day, with 40 patients in intensive care.

Ahead of the announcement, Edinburgh University professor of public health Linda Bauld said she expected the move to Level 0 on July 19 would go ahead.

Speaking on the BBC’s Good Morning Scotland radio programme, she said: ‘What the Scottish Government will want to avoid is what is happening in Europe now.

‘The Netherlands has seen an over 700% increase in cases. They’ve had to close nightclubs again, put restrictions on bars and restaurants, they’ve had to cancel mass events.

‘I think the Scottish Government will want to continue to move forward, but Level 0 is not a huge jump, it’s a relatively modest jump to the next stage.’

Meanwhile, another public health specialist urged the First Minister to keep the current restrictions in place for longer.

Professor Andrew Watterson of Stirling University said too few people currently had the protection of both vaccine doses.

He told the Times: ‘For this to be irreversible, it’s got to be cautious.

‘We must rule nothing out and I’ve been very, very clear about that.

‘We must protect the public and we will not hesitate to use the means that we have at our disposal.’

What the U.S. Can Be taught From China’s Industrial Coverage Errors—and Successes