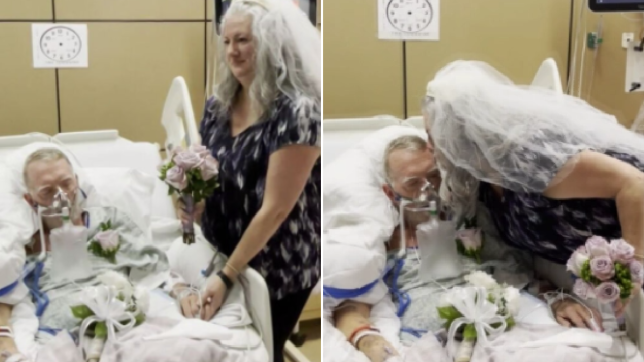 Jerry Nabors realized he wouldn’t survive Covid – so asked fiancee Sherry to marry him as he lay in his hospital bed. He died three days later (Pictures: WLOX)

A seriously-ill Covid patient who knew the disease would kill him got married to his girlfriend days before his death. Jeff Nabors, 62, wed long-term partner Sherry, 53, in his hospital room at Memorial Hospital in Gulfport, Mississippi, on February 4.

Jeff died of the disease three days later, with Sherry holding his hand and weeping as he took his final breaths. Sherry said: ‘We loved each other so, so much. And I think he just wanted me to be apart of his family…It wasn’t what we had in mind, but it was beautiful.’

Recalling their final moments together, she added:’I was sitting on his bed and I had my head down, crying.’ The grieving widow tested positive for Covid in January, despite she and Jeff taking every precaution to try and avoid the virus.

Sherry, who recovered quickly, said: ‘We were very careful. We wore our masks. We had hand-sanitizer everywhere.’ But Jeff suffered from a respiratory condition called chronic obstructive pulmonary disease. That caused a far more serious bout of Covid that ultimately killed him.

He proposed several days after being admitted to hospital.

Jeff’s body managed to clear the virus, but it left his lungs too badly damaged for him to survive.

The Nabors’ wedding marked a tragic end to a blissful romance beginning in 2006, when the couple were neighbors in Houston, Texas. Sherry’s garage door broke, so her daughter ran to find help with it, and asked Jeff to help out.

The couple, who both have children from previous relationships, quickly became inseparable, and began dating in 2007. They got engaged in December 2020, just before coming down with Covid, and brought forward their wedding plans on realizing Jeff was not going to recover.

Sherry has urged people to remain cautious as Covid cases drop and states – including her home state of Mississippi – lift all Covid restrictions.

She told Fox News: ‘There are other people out there that this can harm. It may not harm you, but it could harm somebody else.’

More than 111 million doses of vaccines have been administered across America, with President Joe Biden vowing to offer all adults a shot by the end of May.