Moderna, Pfizer and other drug companies are all working on vaccines that target different Omicron variants (Picture: Getty Images)

More than two million people are estimated to have had the virus in the week ending June 24, up 32% from a week earlier.

The number of hospital admissions and patients in the ICU is also rising, according to the Office for National Statistics (ONS).

This is the highest estimate since late April, but is still some way below the record of 4.9 million at the peak of the Omicron BA.2 wave at the end of March.

Susan Hopkins, Chief Medical Adviser at the UK Health Security Agency (UKHSA), stressed that the country will also see at least one wave of Covid in the autumn-winter period.

Calls for mitigation measures – including an Omicron-specific jab – have been renewed.

Moderna, Pfizer and other drug companies are all working on vaccines that use different techniques to target different Omicron variants, which are to blame for the current spike, the Guardian reports.

‘However, it will be up to the government to decide which of these versions will be best for the country,’ Professor Adam Finn of Bristol University said. 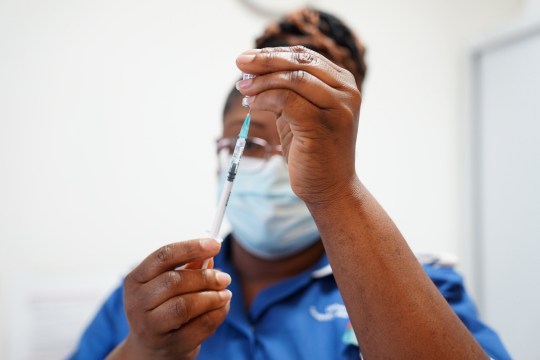 Nearly 150 million doses of a Covid vaccine have been given in England (Picture: PA)

‘Officials are likely to be influenced not so much by data which shows, which formulation looks the most promising in tackling the new variants, as by the company which looks the most able to deliver the right number of vaccines on time.’

Professor Francois Balloux, director of University College London’s Genetics Institute, said companies will have the best chance of designing a vaccine able to tackle the variant most widespread if they wait until the last moment.

But he stressed that this poses a risk of production failing to deliver sufficient doses in time.

As seen with the Glastonbury Festival, the surge in cases is likely to continue over the summer as people mix at large events.

Fourth doses are already being rolled out to certain groups, including the elderly, with another booster set to be offered in the autumn.

When asked on BBC’s Sunday Morning if it matters that a lot of people are again testing positive, she said: ‘It certainly matters to those individuals, obviously.

‘Many of them will feel unwell and I send out my commiserations to them.

‘But of course, it matters on a national basis because, whilst we have an armament now of vaccines and antiviral treatments, we do have, as you’ve just highlighted, a rise in hospital admissions and occupancy.

‘And that means it’s not just Covid that we are concerned about, but it’s actually our ability to treat other illnesses as well.’