The Omicron strain has sent cases flying in South Africa after a period of relatively low transmission (Picture: Getty Images)

Coronavirus infections in South Africa have risen by 403% in a week as the Omicron variant continues to spread.

A total of 4,473 cases were recorded in the country yesterday – up from 868 the same time last week.

Yesterday’s daily toll marks a 92% jump from Monday, with results coming back positive for more than 10% of 42,000 people getting tested over 24 hours.

‘Please keep safe, use a mask and go for vaccination as 1000s of scientists in the world try to understand better.’

Over the past two weeks, the new Omicron variant has sent cases skyrocketing following a period of relatively low transmission.

Scientists have said the vast majority of people who are hospitalised with the new strain are unvaccinated, with 87% of admissions being patients who aren’t jabbed. 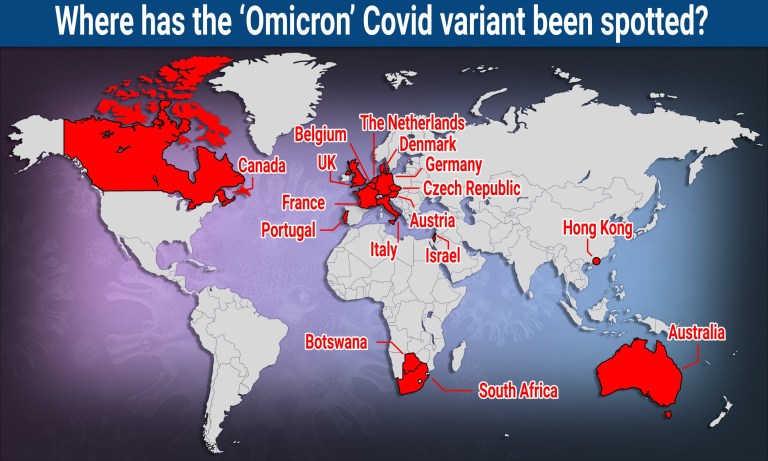 Since November 11, the Omicron variant has spread to a number of countries, with many governments putting travel restrictions in place as a precaution (Picture: Metro.co.uk)

Covid hospitalisations in Guateng, where fewer than 40% of people have been jabbed, have soared by 300% this week.

Many African countries have relied on bilateral deals, donations and the Covax vaccine sharing scheme for their supply of jabs.

While supply to the continent has improved, the Global Vaccine Alliance (Gavi) says donations have been ‘ad hoc, provided with little notice and short shelf lives’.

Last week South Africa had to delay the delivery of more doses because it had too much stock.

Officials have blamed concerns over side effects and misinformation about the vaccine for the country’s low uptake, the BBC reports.

Getting vaccines to remote rural areas is also a problem, while other barriers include poor public transport and misconceptions that patients have to pay for the jab. 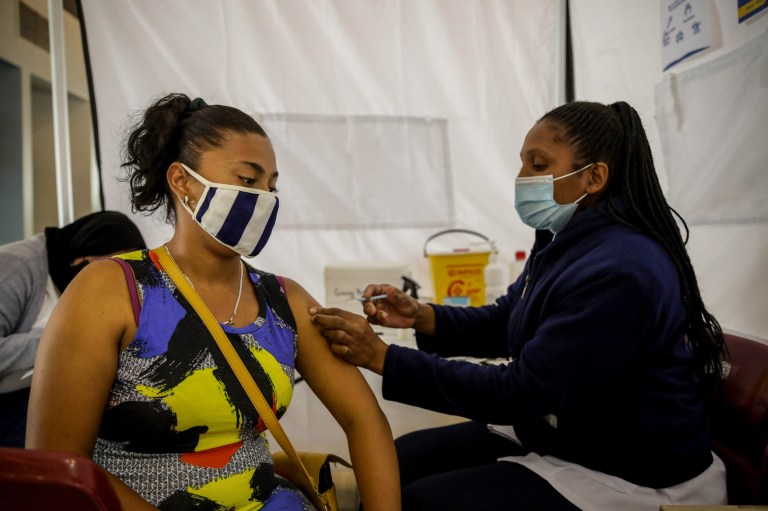 Vaccination rates in Africa have been the slowest in the world, partly due to unequal distribution (Picture: Getty Images)

In South Africa, 42 doses have been administered per 100 people – compared to the global average of 100 per 100 people. Many wealthier countries have exceeded that by far.

Several countries have put travel restrictions into place ever since South African scientists discovered the Omicron variant had emerged from Botswana on November 11.

The strain has more than 30 mutations – around twice as many as the Delta variant – making it more transmissible and able to evade antibodies.

But doctors in South Africa are saying its symptoms have been milder compared to its predecessor.

Over the weekend virologist Marc van Ranst said: ‘If the Omicron variant is less pathogenic but with greater infectivity, allowing Omicron to replace Delta, this would be very positive.’

But more data is still needed before we have a full picture of the risk, particularly when it comes to the vaccine’s ability to beat the strain.

This is why the UK has brought in a host of measures, including the reintroduction of face masks in retail and on public transport, and mandatory PCR tests for people returning to the country.

In a bid to limit the spread of Omicron, the minimum gap for booster jabs after receiving a second dose has been halved from six months to three.