SÃO PAULO—Researchers and doctors are sounding the alarm over a new, more aggressive coronavirus strain from the Amazon area of Brazil, which they believe is responsible for a recent rise in deaths, as well as infections in younger people, in parts of South America.

Brazil’s daily death toll from the disease rose to its highest level yet this week, pushing the country’s total number of Covid-19 fatalities past a quarter of a million. On Tuesday, Brazil reported a record 1,641 Covid fatalities. Neighbor Peru is struggling to curb a second wave of infections.

Should the world community do more to distribute vaccines to poorer countries? Join the conversation below.

The new variant, known as P.1, is 1.4 to 2.2 times more contagious than versions of the virus previously found in Brazil, and 25% to 61% more capable of reinfecting people who had been infected by an earlier strain, according to a study released Tuesday.

With mass vaccination a long way off across the region, countries such as Brazil risk becoming a breeding ground for potent versions of the virus that could render current Covid-19 vaccines less effective, public-health specialists warned.

A more prolonged pandemic could also devastate the economies of countries such as Brazil, slowing growth and expanding the country’s already large debt pile as the government extends payouts to the poor, economists said.

“We’re facing a dramatic situation here—the health systems of many states in Brazil are already in collapse and others will be in the next few days,” said Eliseu Waldman, an epidemiologist at the University of São Paulo. 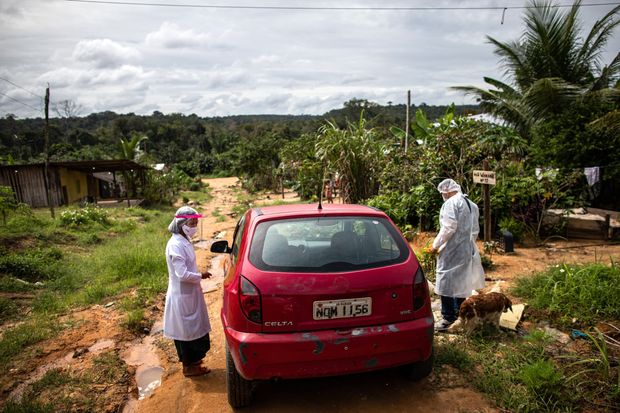 Healthcare workers checked arrivals at a field hospital in Manaus, Brazil, on Feb. 11.


Several doctors have reported a surge in younger patients in their Covid-19 wards, many in their 30s and 40s with no underlying health problems. In Peru, some doctors said patients are becoming seriously ill faster, just three or four days after the first symptoms emerged, compared with an average of nine to 14 days last year.

The Amazonian strain, P.1, emerged in the Brazilian city of Manaus late last year and quickly caught the attention of Brazilian and international scientists who raced to map its spread. The variant’s large number of mutations to the spike protein, which helps the virus penetrate cells, have caused particular concern.

“We’re in the worst moment. I wouldn’t be surprised if P.1 is all over Brazil by now,” said Felipe Naveca, a researcher at the Oswaldo Cruz Foundation who has studied the new strain. He estimated that Brazil is already home to hundreds of new Covid-19 variants, although P.1. is the most worrying so far, he said.

However, researchers are still at a loss as to why more young people appear to be falling ill and if P.1 is more deadly, or just more contagious.

“The recent epidemic in Manaus has strained the city’s healthcare system, leading to inadequate access to medical care,” wrote the authors of the P.1 study, which was led by Nuno Faria, a professor of virus evolution at Oxford University and Imperial College London. 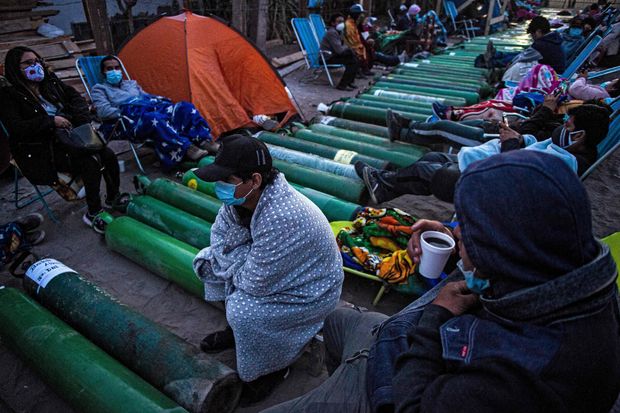 People waited to refill empty oxygen cylinders on the southern outskirts of Lima, Peru, on Feb. 25.

“We therefore cannot determine whether the estimated increase in relative mortality risk is due to P.1 infection, stresses on the Manaus healthcare system, or both,” they wrote.

A study led by Mr. Naveca released last week showed that in some cases the P.1 strain carried a viral load about 10 times higher than the initial versions of the virus that were circulating in Brazil for most of the pandemic. But the group of international scientists led by Mr. Faria concluded that it wasn’t possible to determine whether P.1 infection is associated with increased viral loads until detailed clinical investigations are conducted.

Researchers in South Africa struggled with the same questions when studying another new variant, B.1.351. Doctors there also reported a rise in hospitalizations and deaths of younger patients, but researchers concluded that more younger people were getting seriously ill because more people were being infected overall. The likelihood of younger people dying increased, they said, because hospitals were overwhelmed, not because the variant itself was more deadly.

Another possible explanation for the rise in younger patients is that the virus has already moved its way through many older hosts who passed away, said Francisco Cardoso, an infectious-disease specialist at the Emílio Ribas hospital in São Paulo.

Latin America has been one of the world’s Covid-19 hot spots since the pandemic began, but in recent days doctors in Brazil have grown ever more desperate, describing scenes of horror across the country. While the new strain is largely to blame, so too is a lack of preparation and prevention by the region’s governments, said public-health specialists.

Hospitals are operating at ICU occupancy rates above 80% in almost two-thirds of Brazilian states. After scores of patients suffocated to death in Manaus earlier this year when hospitals ran out of oxygen, prosecutors are investigating reports from another Amazonian city that intubated patients were tied to their beds following a shortage of sedatives.

In Peru, where the government has detected the P.1 strain, hospitals were quickly pushed beyond capacity as infections surged in January after one of the world’s worst outbreaks last year. Doctors are now choosing among dozens of patients when an ICU bed opens up, while Chile is donating lifesaving oxygen amid acute shortages.

The scenes come as the U.S., the U.K. and Israel celebrate falling rates of infection amid mass vaccination campaigns, evidence of a widening immunity gap between rich and poorer nations. While more than 15% of people in the U.S. have received a Covid-19 shot, Brazil has administered vaccines to only 3% of its population. Peru and Colombia have vaccinated less than 1%.

If Latin America doesn’t find a way to speed up its vaccination campaigns, other countries such as Colombia and Bolivia that have seen recent slowdowns in new infections could also fall victim to the new variant, infectious-disease specialists said.

The longer the disease is left to fester in countries such as Brazil, the greater the chance that new variants will emerge that reduce the effectiveness of Covid-19 vaccines, thereby also posing a threat to nations that have already immunized their populations.

“Unless everyone in the world gets the vaccine soon, none of us will be protected,” said Patricia Garcia, a former Peruvian health minister and epidemiologist. “It will never stop.”

Cesar Palacios, a 44-year-old pediatrician in Peru’s northern city of Piura, lost his parents and younger sister to the disease earlier this year. He spent 10 days on a ventilator after getting sick himself, the illness advancing quickly as his blood-oxygen levels fell into dangerous territory, at 86% just a day after his first symptom. A few days later he was in an ICU.

“When you are going to be put on a mechanical ventilator, you think, am I going to live? Am I going to die?” said Dr. Palacios. “I had no other option. I was so scared.”

While Peru has imposed a nighttime curfew in Lima and other states with high infections, Brazilian cities such as São Paulo and the capital, Brasília, have introduced tougher restrictions over recent days.

But many Brazilians have defied the rules, taking a cue from the country’s president. Right-wing leader Jair Bolsonaro has played down the disease and attacked state governors for imposing lockdowns, accusing them of destroying local businesses.

Military police in São Paulo raided about 50 establishments over the weekend that refused to comply, including a group of 190 elderly Brazilians holding a clandestine party.

—Luciana Magalhaes in São Paulo and Gabriele Steinhauser in Johannesburg contributed to this article.

As highly transmissible coronavirus variants sweep across the world, scientists are racing to understand why these new versions of the virus are spreading faster, and what this could mean for vaccine efforts. New research says the key may be the spike protein, which gives the coronavirus its unmistakable shape. Illustration: Nick Collingwood/WSJ

Write to Samantha Pearson at samantha.pearson@wsj.com and Ryan Dube at ryan.dube@dowjones.com