As vaccine rollouts gain momentum, governments world-wide are looking at ways for people to prove they are inoculated against the coronavirus, raising logistical and ethical concerns about whether others will be excluded from daily life.

The U.K. government recently announced it will consider whether Britons will need proof of vaccination or a negative Covid-19 test to visit bars, return to the office or attend theaters and sporting events.

In Israel, a vaccine passport was launched last week allowing those who are inoculated to go to hotels and gyms. Saudi Arabia now issues an app-based health passport for those inoculated, while Iceland’s government is doling out vaccine passports to facilitate foreign travel. Last month, President Biden issued executive orders asking government agencies to assess the feasibility of creating digital Covid-19 vaccination certificates.

Proponents of the plans say they will enable battered economies to reopen, even as vaccines are still being rolled out, allowing people to enjoy leisure activities and go to work safe in the knowledge they aren’t harming others or at risk themselves. It could also act as an incentive for people to get the shot.

But the concept is potentially fraught with pitfalls. It could discriminate against minority communities, who are less likely to accept the vaccines, according to national surveys, or young people, who are less likely to be given priority to receive them. There are questions about the ethics of granting businesses access to peoples’ health records. 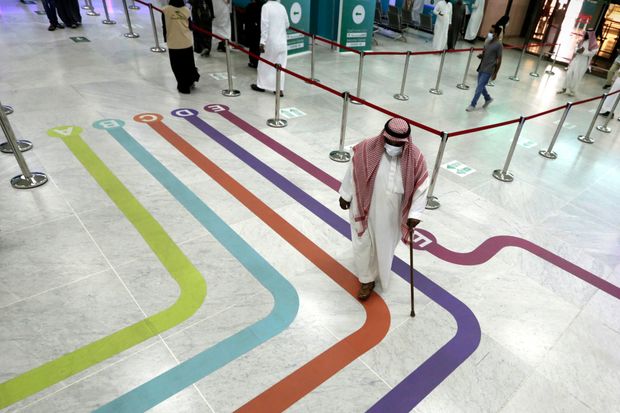 
“The thing underpinning all of this is, what are you going to use it for?” said

director of the Leverhulme Centre for Demographic Science at the University of Oxford. “Is it for international travel? Is it for getting a job? Is it for buying milk?”

Some health authorities are worried that vaccine passports could give people a false sense of security. For example, it isn’t clear whether vaccines stop people from being infected and spreading the disease and whether inoculations will be rendered less effective by mutations of the virus. Scientists are racing for answers to these questions.

In the European Union, leaders agreed at a virtual summit Thursday to come up with an electronic vaccine certificate within three months that can operate across the bloc. But divisions remain over what a certificate could be used for. Some, like Austria and Greece, want it to be a form of passport allowing those who have been vaccinated to travel.

Others, including France, Belgium and the Netherlands, are more skeptical. French President

said Thursday evening that he doesn’t want young people, who won’t get vaccinations for now, to be discriminated against.

The World Health Organization has created a working group to look at how best to create a digital vaccination certificate.

Israel and the U.K., two major countries with advanced vaccination programs, are at the leading edge of the debate. The U.K. aims to have vaccinated all adults by the end of July. British Prime Minister

announced a review into immunity certificates to be concluded before mid-June. 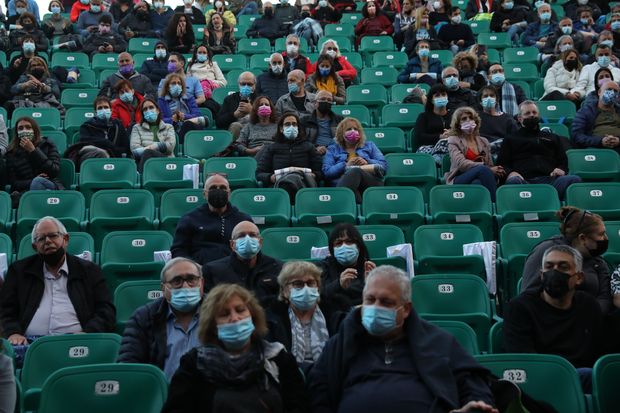 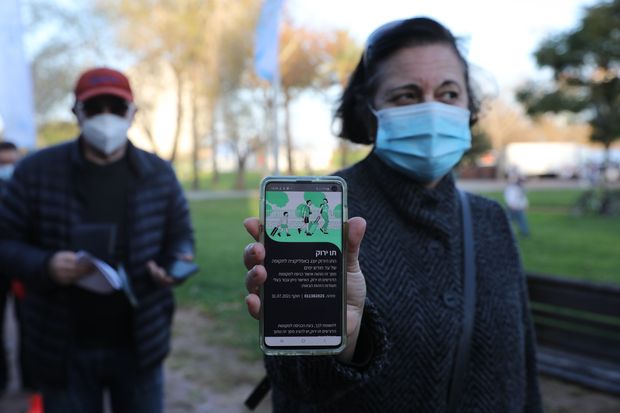 A concert in Tel Aviv on Wednesday, top, for which attendees had to show evidence of vaccination with what are known in Israel as ‘green passports,’ bottom.

Israel on Saturday evening began issuing so-called “green passports” that allow vaccinated people to enter gyms, concerts and hotels. Later, the passes will be used at restaurants and bars, when they reopen in the coming weeks.

Officials have described the green passports as important tools in their efforts to encourage as much of the population as possible to be vaccinated. So far, 50% of the population in Israel has received at least one shot of a vaccine.

The green passports are found on the health ministry’s website or on a mobile app and carry a bar code and a person’s identification number.

The project isn’t without controversy. While vaccination in Israel isn’t mandated, parliament passed a law Wednesday that would allow the county’s health ministry to identify unvaccinated people to local authorities. Other measures may require frequent testing for those who are not vaccinated.

said he was considering proposing legislation that would allow employers to block unvaccinated employees from coming to work, though those decisions aren’t final.

Should people have to prove they are virus-free to go about their daily lives? Join the conversation below.

Israel’s public-health union warned that sharing people’s vaccination status raises privacy concerns. Other experts have raised questions about whether people’s personal information could be used to later target them with political advertising.

In the U.K., where over a third of the population has received at least one shot of the vaccine, the government is legally prevented from forcing Britons to be vaccinated. Initially, government ministers said they were against vaccine passports. But in recent weeks, the government has changed tack.

Mr. Johnson said it is likely that people will need proof of vaccination to travel abroad, much like some countries require a certificate of immunization against yellow fever. But whether the government should mandate certificates to access leisure activities isn’t clear-cut, he said.

“We haven’t had stuff like this before. We never thought in terms of having something you have to show to go to a pub or theater,” he said this week. “There are deep and complex issues that we need to explore.”

To get around fears it would turn those who refuse vaccinations into second-class citizens, the government is exploring whether a certificate could also be granted if a person tests negative for Covid-19.

Airports in Paris and Singapore as well as airlines including United and JetBlue are experimenting with apps that verify travelers are free of Covid-19 before boarding. WSJ visits an airport in Rome to see how a digital health passport works. Photo credit: AOKpass

Officials are exploring whether a vaccine or test certificate can be displayed on an app developed by the country’s National Health Service. That might take a long time to implement, said

a researcher at the Ada Lovelace Institute, a British research foundation. The U.K. government took over six months to build a Covid-19 track-and-trace app.

Meanwhile, the private sector may take matters into its own hands. British vacation operator

has developed a digital health pass that allows people to share health records with employers or other businesses.

In Israel, some business leaders say they will require employees to be vaccinated.

wrote on Facebook that he will only meet face-to-face with vaccinated people.

, which operates malls across Israel, said this month it will not allow unvaccinated workers, suppliers and guests to access its management offices beginning in March.

Once a majority of a country’s population is inoculated, the question is whether the social and economic costs of vaccine passports are worth the potentially small reduction in transmission they could confer, said Mr. Jones.

If vaccinations are keeping infection rates under control, he asked, “Is it really worth it for all this hassle?” 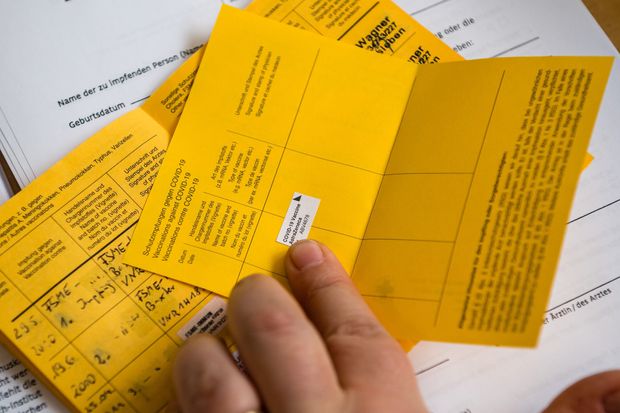 A healthcare worker in eastern Germany recorded a vaccination earlier this month.

—Laurence Norman in Brussels contributed to this article.

Write to Max Colchester at max.colchester@wsj.com and Felicia Schwartz at Felicia.Schwartz@wsj.com