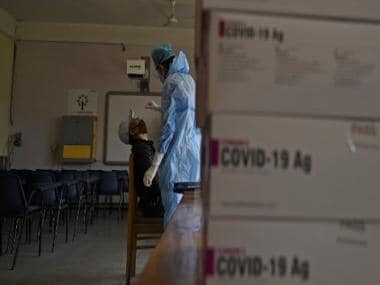 The health ministry also said on Friday that India has one of the lowest COVID-19 deaths per million population in the world, with less than 1,000 fatalities registered daily since 4 October,

The next two-and-a-half months are going to be crucial in the fight against coronavirus because of the winter season and festivals, Union Health Minister Harsh Vardhan said on Friday as India’s caseload rose to 73,70,468 with 63,371 new infections being reported in a day.

According to the health ministry, 895 people succumbed to the virus taking the total deaths in the country to 1,12,161.

India on Friday, however, maintained the trend of registering more recoveries than the new cases, with 70,338 people having recuperated in 24 hours.

Meanwhile, the health ministry also said on Friday that India has one of the lowest 81 COVID-19 deaths per million population in the world with less than 1,000 fatalities registered daily since 4 October, while the fatality rate of 1.52 per cent on Friday was the lowest since 22 March, the Union Health Ministry said.

India has relaxed several restrictions ahead of the festival season allowing not just schools and colleges to reopen, but also cinema halls and theatres after a gap of over six and half months.

Vardhan’s remarks have come at a time results of the WHO Solidarity trials found several of the repurposed drugs (including remdesivir, hydroxychloroquine, lopinavir/ritonavir and interferon) ineffective against the SARS-CoV-2 virus that causes COVID-19.

The results of the trial are yet to be peer-reviewed and have been uploaded on the preprint server medRxiv, but are surely to change these drugs’ prescription across the world.

The state also reported 306 fatalities during the day, taking toll to 41,502, the official said. The number of active patients in the state stands at 1,89,715. The Mumbai division, which consists of Mumbai city and satellite towns, reported 3,630 new cases, raising the total count to 5,46,839. A total of 17,288 people have died so far in the region, the official said.

Karnataka on Friday reported 7,542 new cases of COVID-19, the second highest rise on Friday, and 73 related fatalities, taking the total number of infections to 7,51,390 and the death toll to 10,356. Friday also saw over 8,500 recoveries in the state.

With 2,610 fresh coronavirus cases, the active caseload in Uttar Pradesh stood at 35,263 on Friday while the death toll rose to 6,589 with 46 more deaths, a senior official said. The total number of cases have now reached 4,49,935.

Fifteen more fatalities linked to the novel coronavirus and 2,010 fresh infections were reported in Rajasthan on Friday, taking the death toll from the disease to 1,723 and the tally to 1,69,289, according to an official report.

The COVID-19 death toll in Haryana rose to 1,634 with 11 more fatalities, while 1,277 fresh cases pushed the infection tally to 1,47,933, a health department bulletin here said. Of the new fatalities, four were from Hisar, two each from Faridabad and Gurugram while one death each was reported from Kurukshetra, Yamunanagar and Jind districts, the bulletin said.

Madhya Pradesh on Friday saw 1,352 new coronavirus positive cases, which pushed its caseload to 1,57,936, while 25 fatalities took the toll to 2,735, a health official said.

The Union Territory of Jammu and Kashmir recorded 697 fresh cases, while eight deaths took place in the last 24 hours, taking the number of cases to 86,754 and death toll to 1,366, officials said. While 385 new cases were reported from Kashmir, 312 new cases surfaced in Jammu, the officials said.

According to official figures, a total of 19,29,126 COVID-19 tests have been conducted in Jammu and Kashmir so far.

The coronavirus tally in Goa crossed the 40,000-mark with the addition of 321 cases on Friday, a health department official said.

The next two-and-a-half months are going to be very crucial for us in our fight against the novel coronavirus because of the winter season and the festival season. It becomes the responsibility of every citizen to not let our guard down and follow COVID-19 appropriate behaviour to curb the spread of the infection, Union health minister Harsh Vardhan said.

He said the virus has adversely affected the whole world but simple precautionary measures are effective in preventing the coronavirus to a large extent.

He stressed on the importance of physical distancing for effective containment of the disease.

Vardhan, who is also Science and Technology Minister, also said three vaccine candidates are progressing well in India with one of them in the advanced stage-III clinical trial and two others in stage-II trial.

He expressed hope that India will soon have indigenous production of vaccine against the novel coronavirus.

As smoky and hazy skies are back to haunt Delhi-NCR after a few months of blue skies and clean air, experts have cautioned people to brace for the winter season saying higher pollution level may worsen the impact of COVID-19.

Delhi recorded 22 more COVID-19 fatalities on Friday, taking the toll to 5,946, while 3,428 fresh cases pushed the infection tally in the city to over 3.24 lakh, authorities said.

Environment and health experts have asked people, especially those vulnerable to COVID-19 attack, to be more careful as the chronic exposure to air pollutants is associated with severe infections and higher mortality.

They feel that lung capapcity gets compromised due to pollution, which could lead to complications like pneumonia if one contracts COVID-19.

Allow all women to travel by Mumbai locals: Maha govt to railways

The Maharashtra govt recently wrote a letter to the general managers of Central and Western Railway to allow all women to travel on local trains in the Mumbai region from Saturday.

Though there has been no official confirmation from the railways as to whether or not women travellers will be allowed onboard, state Disaster Management, Relief and Rehabilitation secretary Kishor Raje Nimbalkar said that the govt had requested the railways to make train services available to women passengers from 11 am to 3 pm and from 7 pm onwards till the end of the services for the day.

QR code passes — currently given to those who are entitled to travel — should not be required for women for traveling during these time slots, he added.

The Hyderabad-based pharmaceutical firm had on 13 October reapplied to the Drugs Controller General of India (DCGI) seeking permission to conduct combined phase 2 and 3 human clinical trials of the vaccine in the country.

In its revised protocol, firm stated that the phase 2 trial would include 100 subjects, while the phase 3 would involve 1,400 volunteers, the sources said.

The subject expert committee (SEC) on COVID-19 deliberated on the application on Friday.

“Following deliberation, the SEC has recommended the grant of permission for the phase 2 clinical trial of the potential vaccine first. After they submit the safety and immunogenicity data of the first phase, they then would be allowed to proceed for the phase 3 of the trials,” a source said.

The SEC had on 5 October asked the firm to re-apply stating it will have to conduct both phase 2 and 3 clinical trials and cannot directly hold phase 3 trial for the vaccine in India.

The Indian pharma giant has collaborated with The Russian Direct Investment Fund (RDIF) to conduct clinical trials of the Sputnik V vaccine as well as its distribution.

On a day, the results of a WHO Solidarity Trials placed doubt over the efficacy of four prescribed drugs in COVID-19 treatment, reports said that US government officials are launching a new study testing three drugs to tamp down an overactive response by the immune system that can cause severe illness or death in people with COVID-19.

The drugs are Bristol Myers Squibb’s Orencia and Johnson & Johnson’s Remicade, which are sold now for rheumatoid arthritis and an experimental drug from AbbVie called cenicriviroc. The drugs work in different ways to inhibit cytokine storm, an overproduction of chemicals the body makes to fight infections that can damage lungs, kidneys, the heart and other organs.

Hong Kong has banned Air India and Vistara flights from October 17 to 30 after a few passengers on their flights tested positive for COVID-19 post arrival, a senior government official said on Friday.

Chinese coastal city Qingdao on Friday completed testing of all its 11 million residents after a new COVID-19 cluster was detected at a hospital due to improper disinfection, a senior local official said.

Why Lori Loughlin and Felicity Huffman have different prison sentences

Why are stretch marks, melasma, acne and other skin-related problems experienced during pregnancy