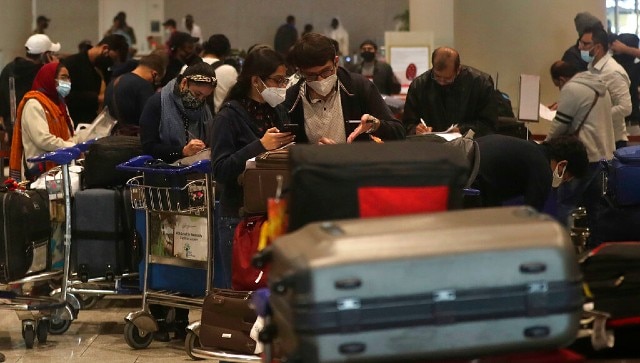 New Delhi: AirAsia India offloaded two middle seat passengers from its Goa-Mumbai flight on Monday, while IndiGo handed over two flyers to security officials during the last three days for not following the COVID-19

Aviation regulator DGCA had on Saturday asked airlines to de-board passengers who do not wear their masks “properly” despite repeated warnings.

The aforesaid incidents came to light after media reported on Wednesday that four passengers were handed over to security agencies on Tuesday for not wearing masks properly onboard Alliance Air’s Jammu-Delhi flight despite repeated warnings by the cabin crew.

The government officials said on Thursday that a middle seat passenger on IndiGo’s Delhi-Goa flight on Monday first created fuss on the issue of wearing PPE gown, and then she kept taking off her mask during the flight even after repeated warnings by the cabin crew.

The crew handed her over to the security authorities once the flight landed in Goa, they added.

A similar incident happened on Wednesday on IndiGo’s Delhi-Hyderabad flight where a passenger refused to wear mask even after repeated warnings by the crew members, they said.

The passenger was handed over to the security officials once the flight landed in Hyderabad, they added.

When asked, AirAsia India spokesperson confirmed the incident and said, “Despite repeated requests, on observation that two guests refused to comply with the safety protocols laid out by the health and governing bodies, AirAsia India deplaned the guests from its Goa-Mumbai flight. The guests were escorted from the flight for further procedures.”

“We place safety and security foremost in all aspects of our operations and apologise for any inconvenience caused to other guests,” the spokesperson added.