More than 100 anti-lockdown protesters have been arrested as they marched through London on the first evening of tougher measures.

Very few people wore face coverings as they joined the ‘Million Mask March’ – an annual event on November 5 which is anti-establishment and against Government corruption – in Trafalgar Square, London.

People began to walk up the Strand just after 6pm, chanting ‘freedom’ and ‘no more lockdown’ and police urged them to go home.

Many of them carried signs, one of which read: ‘No more lockdown, no more cover ups, no more masks, no more lies!’

Officers from both the City of London and Metropolitan Police forces were at the scene, with one officer heard shouting: ‘You are breaking the law.’

Jeremy Corbyn’s brother Piers, 73, arrived with a megaphone despite previously being fined £10,000 for his part in anti-lockdown events.

The Met said the majority of the 104 arrests were for breaches of the new regulations, and the number of arrests was expected to increase through the night.

Four protesters, one of whom was wearing a Guy Fawkes mask, were arrested by police officers near the gates of Charing Cross Station. 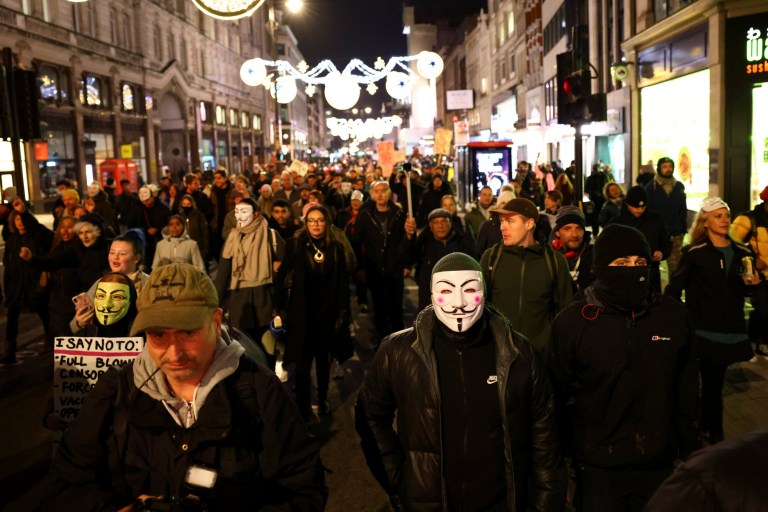 The ‘Million Mask March’ is an annual event on November 5 which is anti-establishment and against Government corruption (Picture: Reuters) 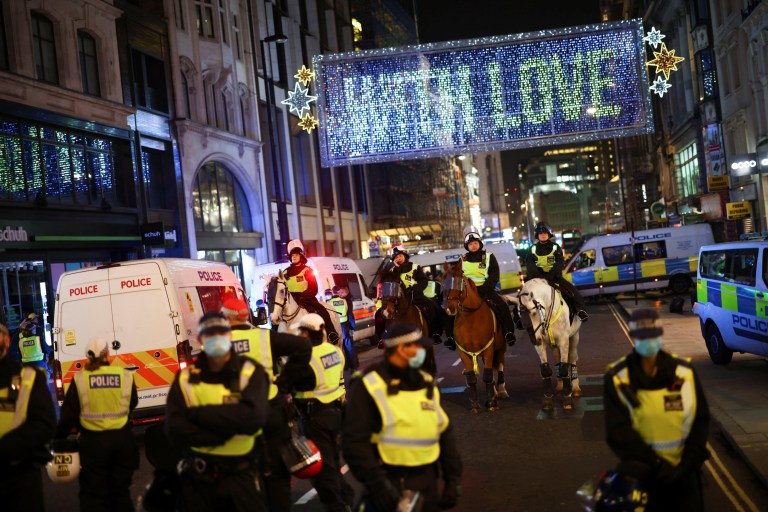 Hundreds of people gathered in Trafalgar Square, followed by police, for the protest (Picture: Reuters) 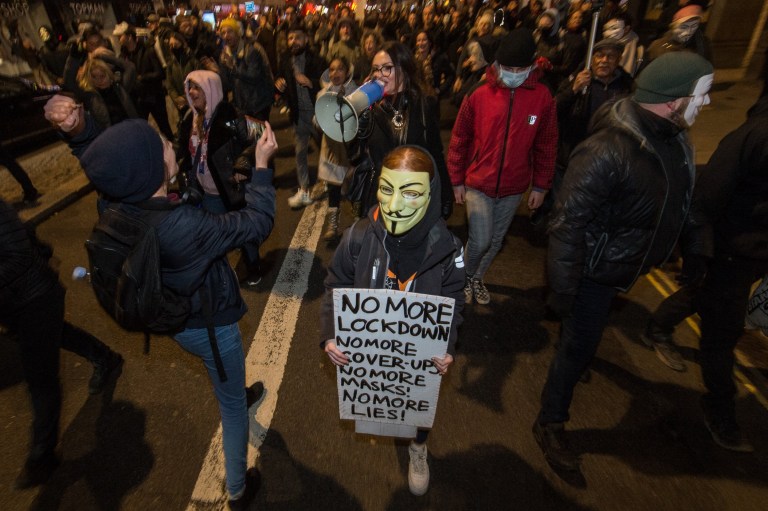 A smaller demonstration gathered near Primark on Oxford Street soon after 7pm, where a number of protesters were grouped in by two lines of officers.

Those clustered in by police chanted ‘stand up’ while officers encouraged protesters gathered nearby to go home.

‘You need to leave, you are breaching coronavirus restrictions,’ one officer told them.

Police said protesters were ignoring directions from officers and warned enforcement action would be taken against those who did not disperse.

‘This gathering is unlawful and is putting others at risk,’ a tweet by the force said.

‘We are directing those there to go home. Failure to do so will result in enforcement action.’ 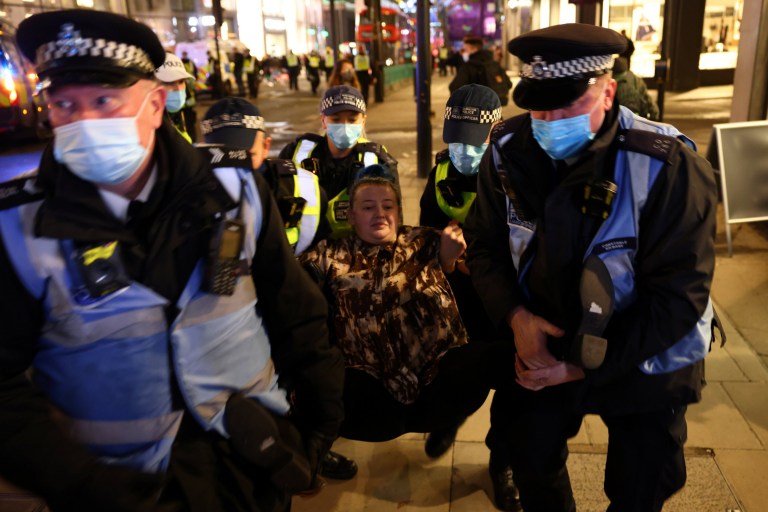 A woman is detained by police officers as protestors from the Million Mask March demonstrate (Picture: Reuters) 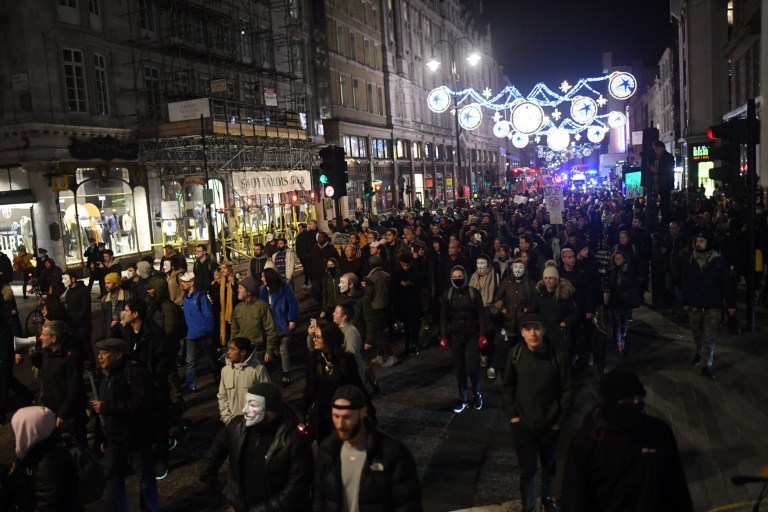 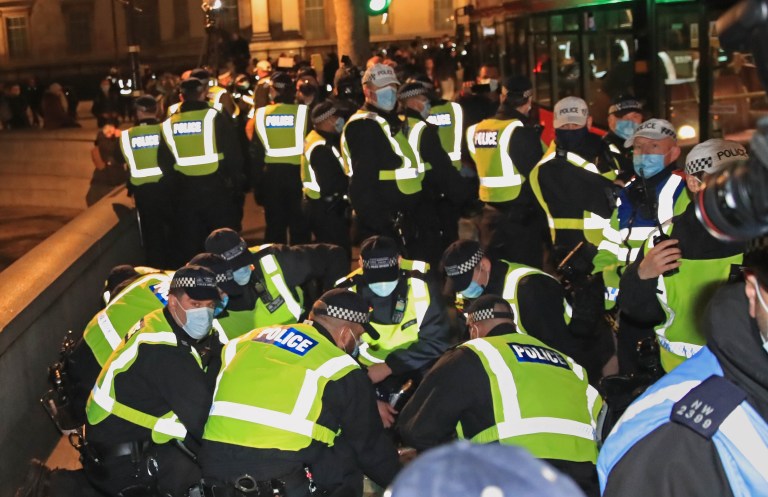 The Metropolitan Police said 104 arrests were made in London last night (Picture: PA)

A number of police vans and officers were still in place on Oxford Street at 8pm, while a number of protesters remained grouped in.

‘We are eight months into this national pandemic and frankly there can be no excuse for people to dangerously breach regulations which are there to prevent further spread of coronavirus,’ she said.

‘Tonight, a crowd of people chose to ignore the new regulations, to behave irresponsibly and meet in a dangerous manner.

‘More than 100 of these people have now been arrested and will have to face the consequences of their actions.’

She added: ‘I would continue to urge people across the city to keep yourselves safe and stick to the regulations.’

It comes after three people were arrested and 13 were fined in a similar anti-lockdown protest in Liverpool city centre.

There were reports of huge crowds of people at St George’s Hall at around 6.30pm yesterday.

A number of people were given fixed penalty notices for breaching lockdown regulations, before the majority of the group left the area.

‘Merseyside Police has made it very clear on multiple occasions that the public are advised not to congregate, as protest is no longer an exemption for gatherings under the current restrictions,’ said chief inspector Peter Clark.

‘A significant amount of people attended St George’s Hall this evening and after being dispersed, some groups then moved to the Pier Head where they reformed.

‘A total of 13 fixed penalty notices have been issued and we are now gathering evidence and carrying out a number of enquiries to identify those who attended, in particular those involved in organising the event, so that further enforcement action can be taken.

‘We will always try to engage with the public in the first instance however the regulations are in place for a reason, and we will not hesitate to use enforcement where they are ignored and the health and safety of others is at risk.’

Where does the Queen spend Christmas?