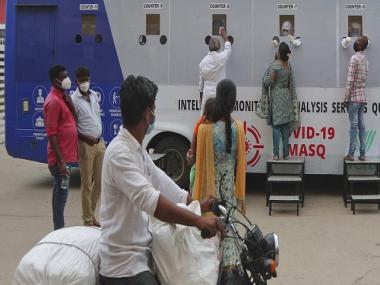 Coronavirus LIVE Updates: India’s recoveries have mounted to 11,45,629, while there are 5,67,730 active cases of coronavirus infection in the country presently.

Coronavirus LATEST Updates: India’s recoveries have mounted to 11,45,629, while there are 5,67,730 active cases of coronavirus infection in the country presently.

India registered over 50,000 new coronavirus cases for the third consecutive day on Saturday, taking the nationwide case count to 16,95,988. However, recoveries also surged to 10,94,374 and the recovery rate improved to 64.53 percent, said the health ministry.

Meanwhile in Delhi, the tussle between the Aam Aadmi Party (AAP) government and Lieutenant General Anil Baijal resurfaced, with the latest point of contention being the LG’s cancellation of orders allowing weekly markets and hotel to resume business in the National Capital.

The capital also saw the beginning of the second round of a sero-survey to gauge the spread of the virus.

The health ministry had in the morning reported that there are 5,65,103 active cases of coronavirus infection in the country. The recovery rate among COVID-19 patients was recorded at 64.53 percent, while the fatality rate had further dropped to 2.15 percent— the lowest since the first lockdown—the ministry said in a statement issued later in the day.

On the global platform, India continues to register and maintain the lowest COVID-19 mortality rate, it said, asserting that this is a testimony to the focused, coordinated, pre-emptive, graded and evolving “test, track, treat” strategy and efforts of the Centre, states and Union Territories.

On the backdrop of rising recoveries and falling fatality rate, the Centre decided to allowed the export of indigenously produced ventilators, the ministry said. As on 31 July, only 0.22 percent of the active cases in the country were on ventilators, it stated.

Delhi’s containment zones down to 496, sero-survey kicks off

Following a steady decline in the number of active COVID-19 cases in Delhi, the containment zones have also come down to 496 from 715  providing relief to thousands of people living in these restricted areas. The decision was taken after a two-day review, said Delhi Revenue Minister Kailash Gahlot.

In Delhi, a locality is declared a containment zone by district authorities if three or more persons test positive to COVID-19. In a review of COVID-19 situation in Delhi, on 29 June, Chief Minister Arvind Kejriwal had expressed concern over the large size of containment zones in Delhi as it restricted movement of a large population, Gahlot said.

While more restrictions are being eased under Unlock 3, a fresh scuffle is on between the AAP government and the lieutenant governor, this time on whether hotels and weekly bazaars should be reopened. A day after LG Anil Baijal rejected the AAP government’s decision to allow hotels and weekly bazaars to resume business, Deputy Chief Minister Manish Sisodia wrote to Union Home Minister Amit Shah seeking directions to the LG to reverse his order.

Sisodia accused the Centre of adopting a “dual policy” towards Delhi where COVID-19 situation has been “quite under control” in past one month and “is gradually headed to become normal” and said the state government would resend its proposal on reopening of hotels and weekly markets to the lieutenant governor on Tuesday.

“I request you to ask the LG not to stop the proposal. If traders start their business, jobs will be generated, and that the condition of the economy will improve,” Sisodia, who also holds the finance portfolio, said in his letter.

Meanwhile, a five-day sero-survey, aimed at covering all districts and various demographic segments, began in the National Capital on Saturday. This will aid the govt to tailor its strategy to changing circumstances, the chief minister’s office tweeted.

A senior government official told news agency PTI that under the exercise, 15,000 samples would be collected from 1 to 5 August, across different areas and age groups. Representative samples will be taken from all the 11 districts, he said.

A sero-prevalence survey involves testing the blood serum of individuals to check for the prevalence of antibodies against infection. An earlier survey from 27 June to 10 July had shown that 24 percent of Delhi residents have developed antibodies.

Many state and UTs reported fresh infections and deaths in the day, with Arunachal Pradesh, Telangana and Odisha witnessing record spikes in daily cases.

Arunachal Pradesh reported its highest single-day spike in COVID-19 cases as 107 more, including 40 security personnel, tested positive for the disease, taking the state’s tally to 1,591. “Forty security personnel of various central paramilitary forces -37 from Changlang and one each from Papum Pare, Namsai and Tirap – are among fresh patients,” said state surveillance officer L Jampa. All, barring three, are asymptomatic and have been shifted to COVID Care Centres, he added.

Arunachal Pradesh now has 670 active cases, while 918 people have recovered from the disease and three have succumbed to it.

With 1,602 COVID-19 cases, Odisha also saw its biggest single-day surge in cases, propelling the state’s total to 33,479, while the toll rose to 187 with 10 more deaths. Ganjam district — which has emerged as a virus hotspot— has so far accounted for 99 fatalities, followed by Khurda which has reported 25 deaths. Odisha now has 12,736 active cases, while 20,518 patients have recovered from the contagion so far, the state health department said.

Telangana reported 2,083 new COVID-19 cases, the highest single-day spike so far, taking the count of positive cases in the state to 64,786. With 11 more deaths, the COVID-19 toll in the state rose to 530, a state government bulletin said on Saturday, providing data as of 8 pm on 31 July.

While the Greater Hyderabad Municipal Corporation (GHMC), the epicentre of the contagion in the state, continues to report a high number of cases, there has been a sharp rise in the infections from different districts, including Ranga Reddy, Medchal-Malkajgiri, Sangareddy, Warangal Urban and Karimnagar, the bulletin showed.

Andhra Pradesh also reported a sharp increase in cases, with 9,276 new patients and 58 deaths pushing the case count over 1.5 lakh. Senior Bharatiya Janata Party (BJP)leader and former minister P Manikyala Rao died of coronavirus in a private hospital in Vijayawada on Saturday, party sources told PTI. He was on ventilator support as he suffered a lung infection, the sources said.

The-59-year old leader had on 25 July in a tweet said that there was nothing to worry about and he would emerge hale and hearty. However, he lost the nearly three-week battle with the virus on Saturday.