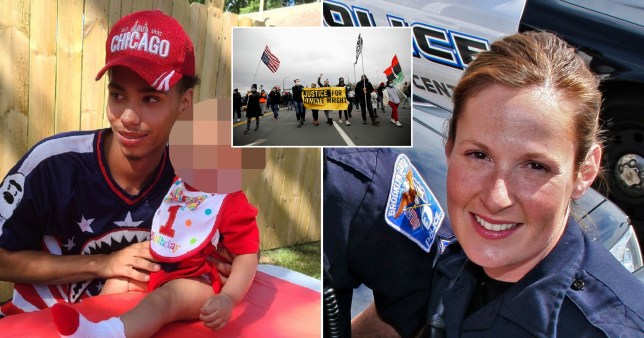 The White police officer who fatally shot black man Daunte Wright dead during a traffic stop in Minnesota on Sunday will be charged with second-degree manslaughter.

Washington County Attorney Pete Orput said the charge against Kim Potter, who served the Brooklyn Center Police Department for 26 years, would be filed later on Wednesday, according to The New York Times. Potter, who resigned from the police force on Tuesday, appeared to mistake her handgun for a Taser and fired it at Wright, 20.

The charge carries a maximum penalty of 10 years in prison as well as a $20,000 fine, the Twin Cities Pioneer Press reported.

Potter was arrested on Wednesday morning and will be booked into the Hennepin County Jail, according to the Bureau of Criminal Apprehension, which investigates police killings in the state.

The Wright family’s lawyer, Ben Crump said in a statement: ‘While we appreciate that the district attorney is pursuing justice for Daunte, no conviction can give the Wright family their loved one back. This was no accident. This was an intentional, deliberate, and unlawful use of force’.

Potter was placed on administrative leave after she and other officers stopped Wright’s car, saying he had an expired vehicle registration. Upon discovering that Wright had a warrant out for his arrest, officers tried to detain him, but he got back into his vehicle and fled.

Body-camera footage released on Monday showed Potter shouting, ‘Taser, Taser, Taser’, before firing a bullet into his chest. ‘I just shot him’, she then said.

The fatal shooting occurred about 10 miles from where black man George Floyd died after then-Minneapolis police officer Derek Chauvin knelt on his neck. The unrest over Wright’s death escalated tensions around Minneapolis, where Chauvin’s trial in Floyd’s death is on its third week.