CONOR MCREGOR is Notorious by name, naughty by nature. The UFC star, 33, almost came to blows with rapper Machine Gun Kelly at MTV’s Video Music Awards last month, after he allegedly threw a bottle at the Bloody Valentine singer.

An eyewitness told TMZ that Conor, 33, asked MGK, 31, for a photo but he refused, and it escalated into the actor shoving the UFC fighter.

Conor McGregor is held back by security after lunging towards Machine Gun Kelly at the MTV Video Music AwardsCredit: Getty 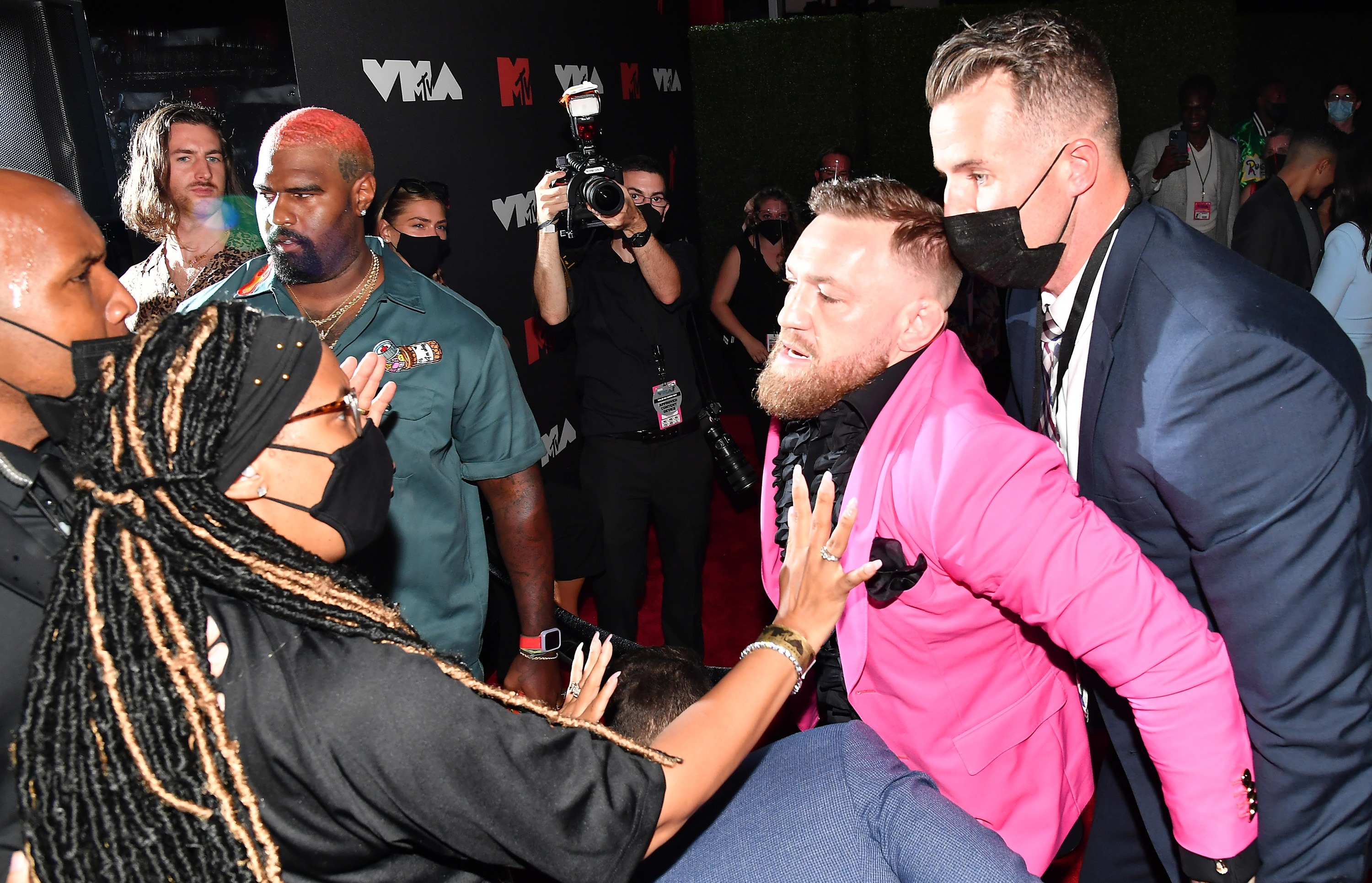 McGregor is alleged to have thrown a drink at MGK and his girlfriend Megan FoxCredit: Getty

TMZ claim the row escalated on the red carpet when McGregor, 33, asked MGK, real name Colson Baker, for a photo and the pop star refused. Machine Gun Kelly is said to have shoved McGregor, who spilled his drink before throwing the remainder of it over the performer and his girlfriend Megan Fox. It’s not the first time, the MMA fighter has gone himself into bother. Last year, Conor claimed long-term rival Khabib Nurmagomedov retired to avoid certain defeat in a UFC rematch between the pair.

The two had already escalated their feud with an exchange a word of words over Twitter last year, with McGregor calling Khabib a “scurrying, hiding rat”.

Over the years, McGregor has also fallen foul of the law when he had an altercation in a Dublin bar and was ordered to pay an £850 fine. SunSport takes you through his incident-packed life… outside and inside the octagon.

In April 2018, at UFC 223’s media day, McGregor’s future opponent Khabib Nurmagomedov had a minor altercation with the Irishman’s friend, Artem Lobov. Two days later, during more promotional appearances for the event, McGregor and 20 others attempted to confront Nurmagomedov, who was leaving the Barclays Center in New York on a bus. 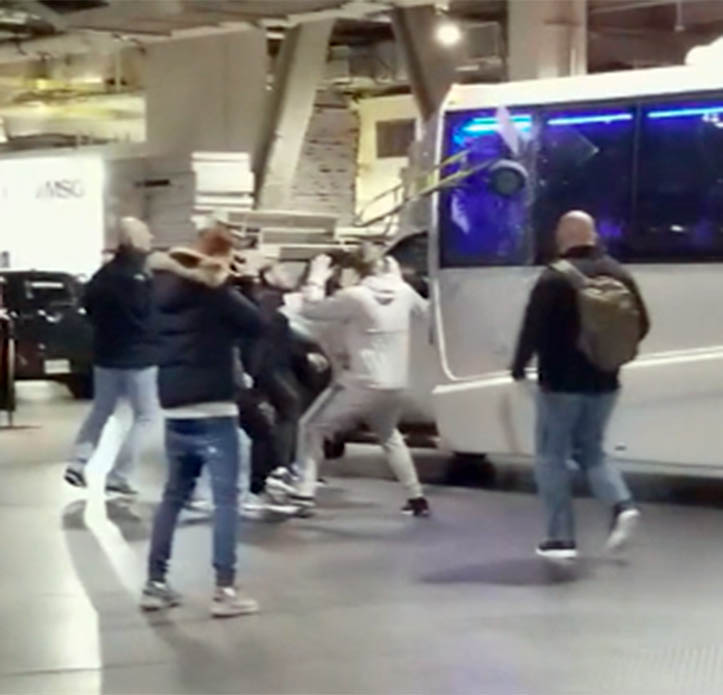 McGregor threw a metal dolly, destroying a bus carrying Khabib Nurmagomedov in at a media event for UFC 223Credit: The Mega Agency

McGregor ran alongside the bus, grabbed a metal dolly and threw it, shattering the bus’s window. Fighters Ray Borg and Michael Chiesa, who were on the UFC 223 fight card, were both injured and couldn’t participate in the event. He was charged with three counts of assault and one count of criminal mischief. McGregor was further charged with menacing and reckless endangerment and released on a bail of around £38,000. 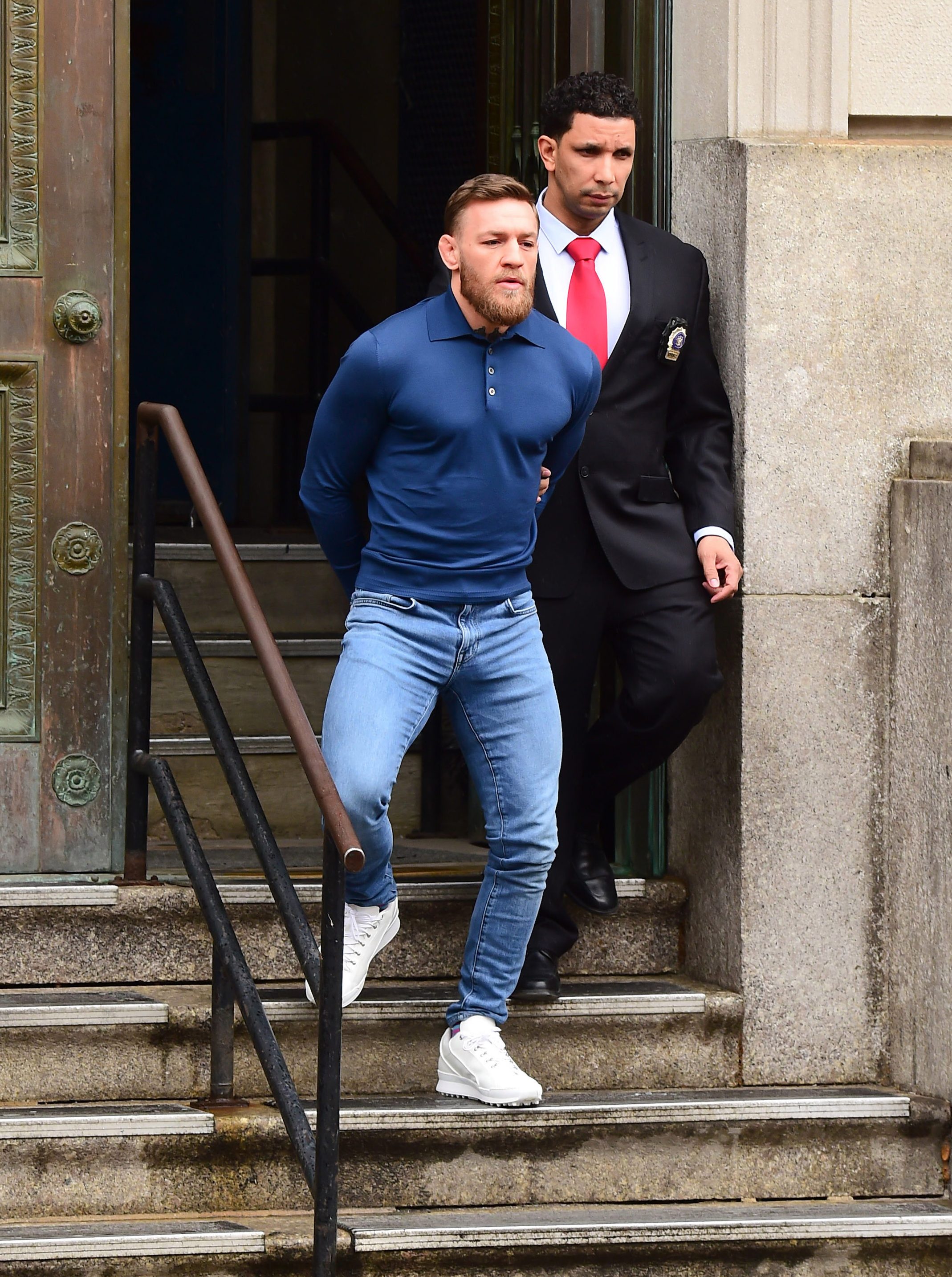 McGregor surrendered himself to the policeCredit: Getty – Contributor 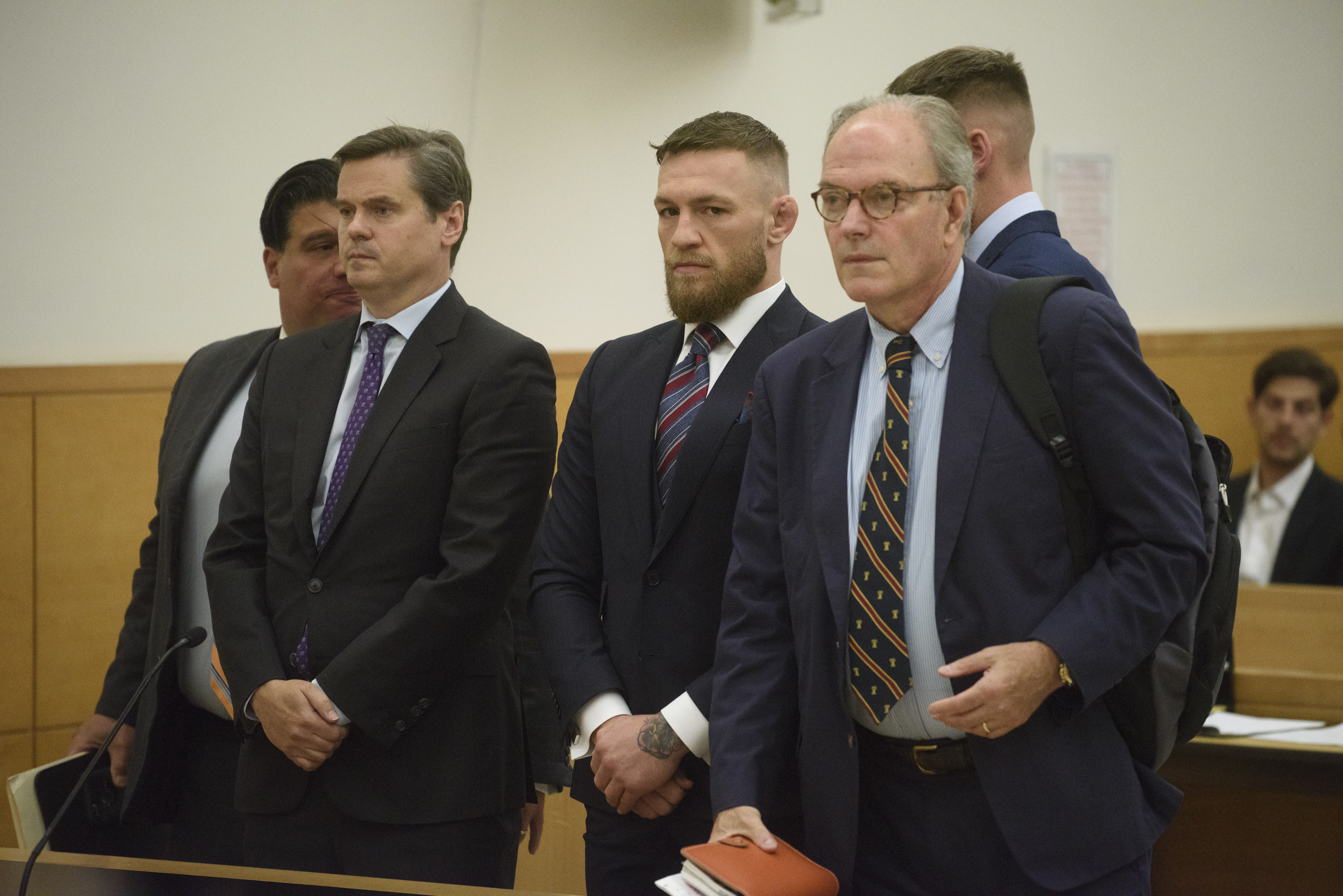 After pleading no contest, McGregor was sentenced to community service and a fineCredit: AP:Associated Press

Appearing in court, Mystic Mac pled no contest to a count of disorderly conduct. He was ordered to perform five days of community service and attend anger management classes.

More shenanigans in the Octagon

When McGregor is in (or near) the Octagon, there’s no doubt his animalistic nature kicks in. After he was forced into a submission at UFC 229 by Khabib Nurmagomedov in their hugely anticipated bout, things got shirty. Nurmagomedov charged towards McGregor’s training partner Dillon Danis. McGregor and his opponent’s cousin Abubakar Nurmagomedov, who were attempting to leave the Octagon got into a scuffle and traded blows. Nurmagomedov’s cornermen Esed Emiragaev and Zubaira Tukhugov entered the melee, as all hell broke loose. 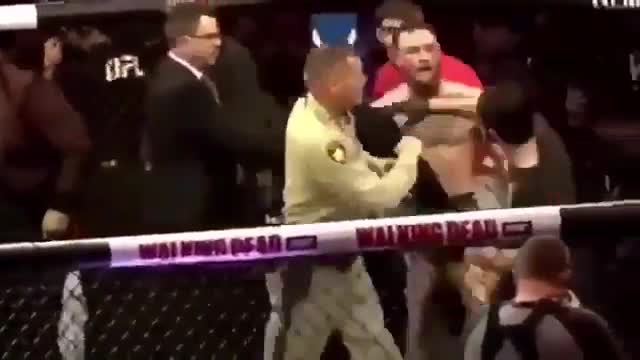 At UFC 229, after losing to Khabib Nurmagomedov he got into a scuffle with his entourageCredit: Twitter 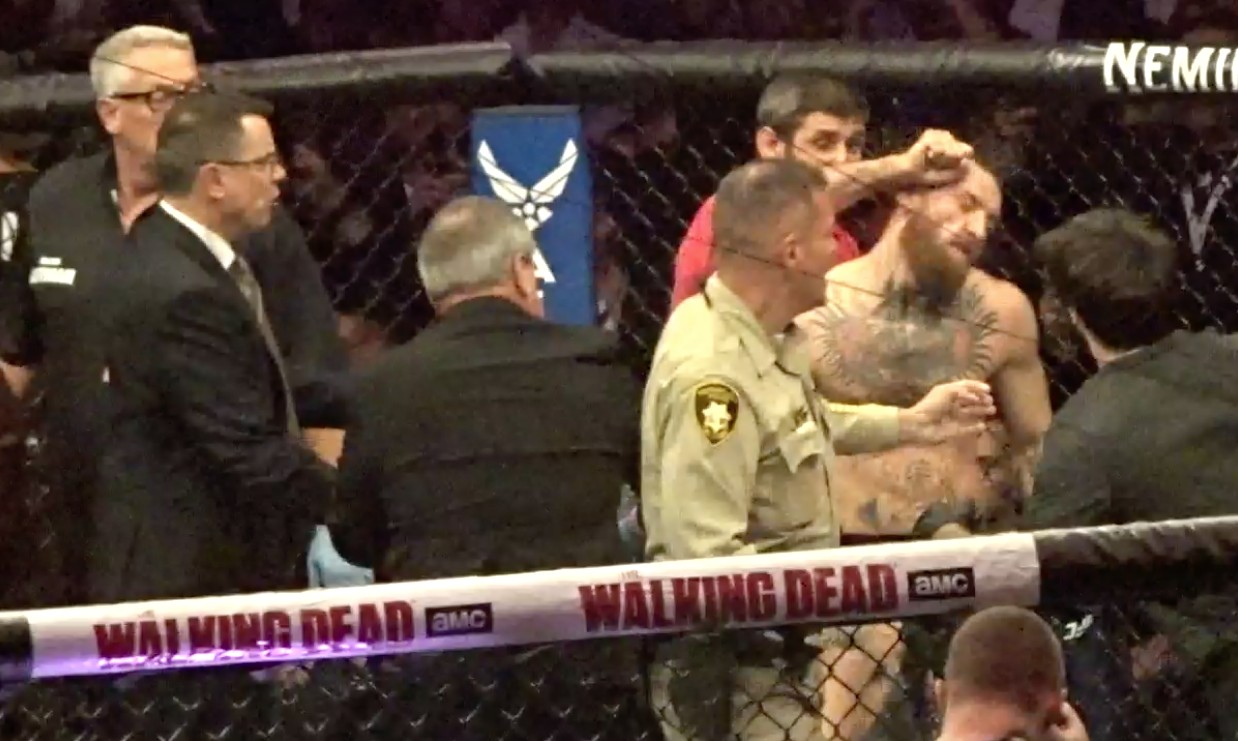 McGregor was struck round the head in the incident 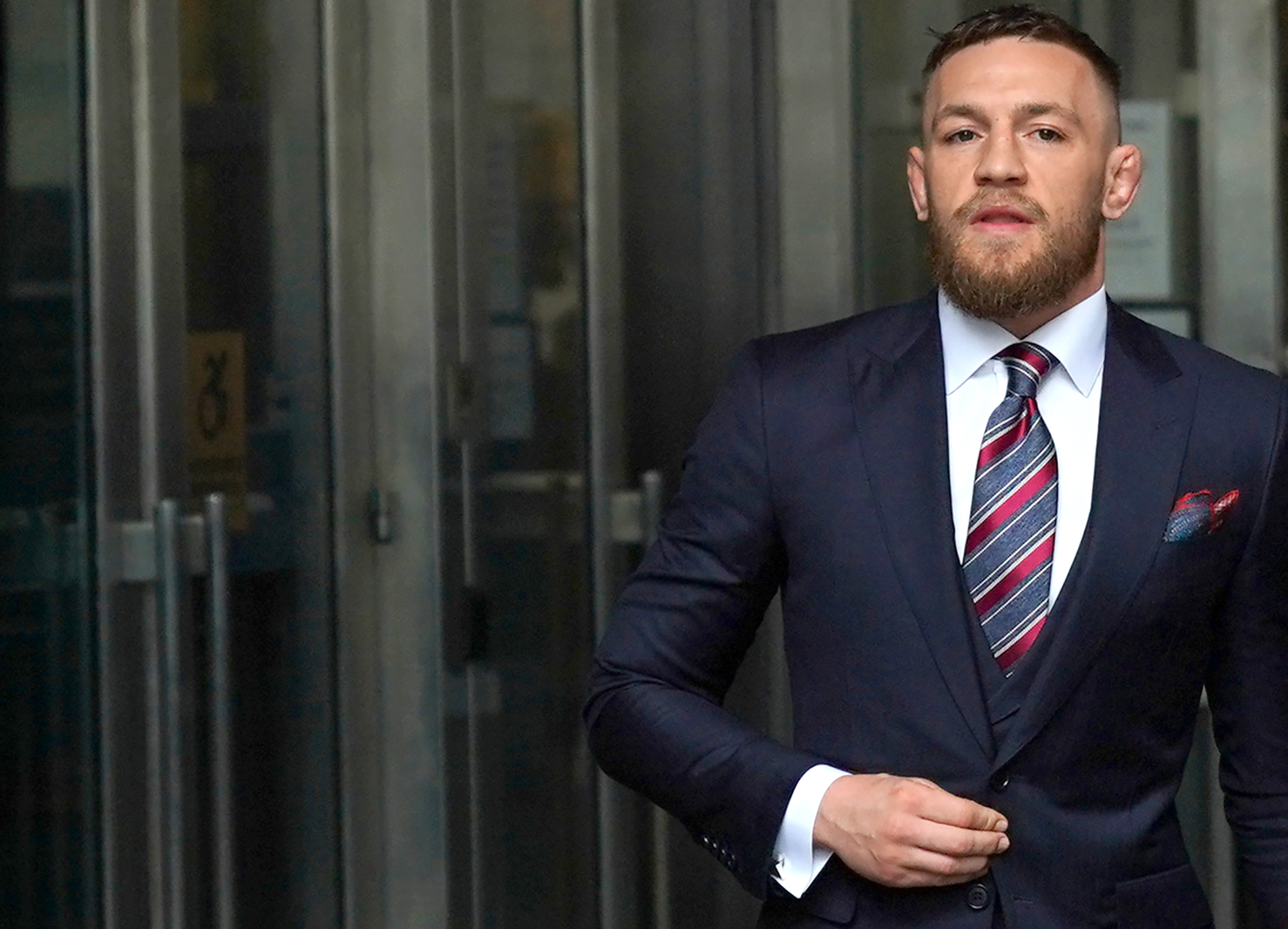 Notorious was given a six-month suspension and a fine of around £38kCredit: AFP or licensors

The Nevada State Athletic Commission held the purse until an investigation into the incident was resolved. Following a thorough investigation, the NSAC announced a six-month suspension for McGregor, as well as a fine of around £38,000 in December 2018. He returned to the cage to beat Donald ‘Cowboy’ Cerrone in January 2020.

He’s a fan of the races 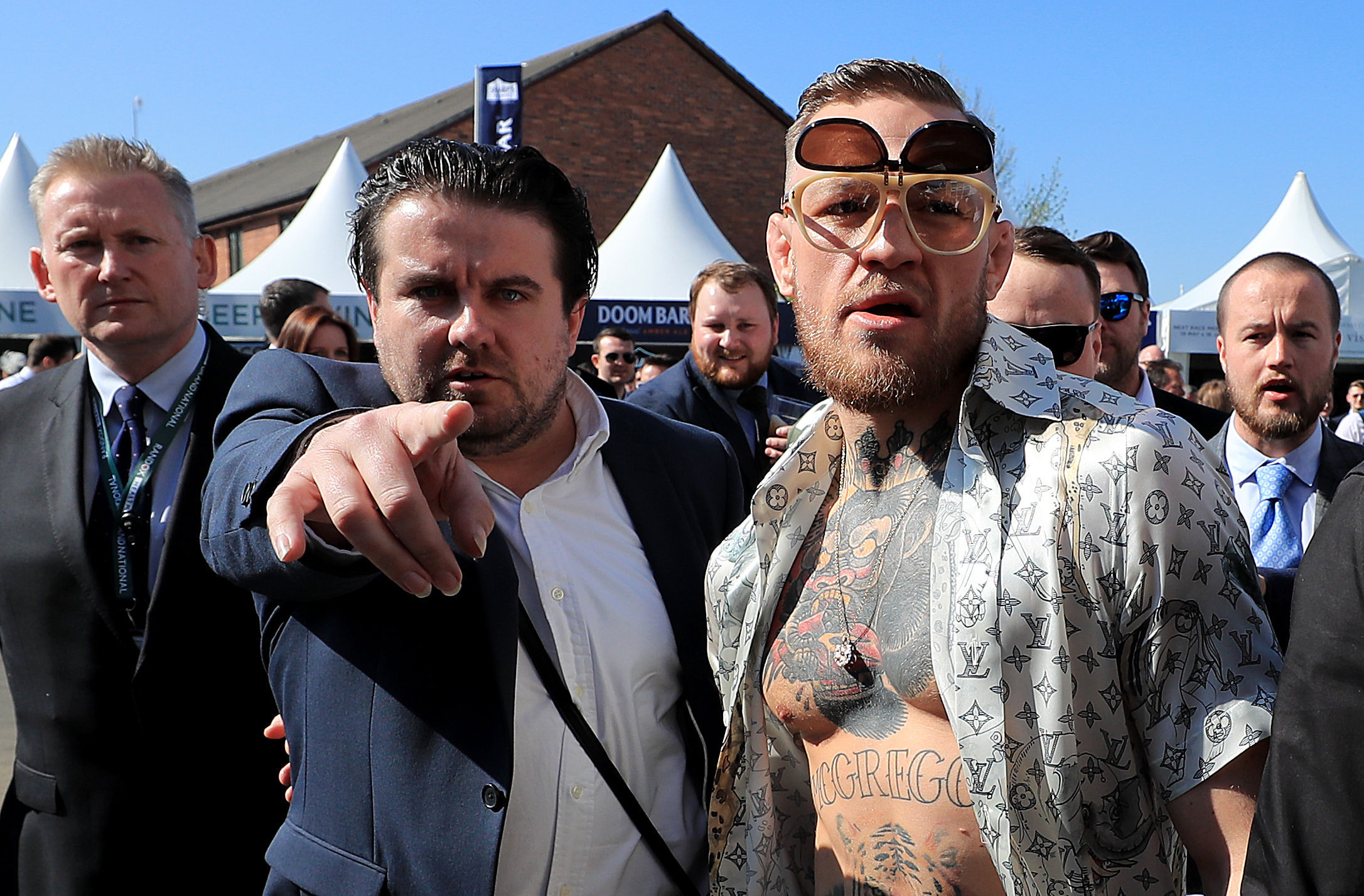 McGregor caused a stir at Aintree in 2017Credit: PA:Press Association 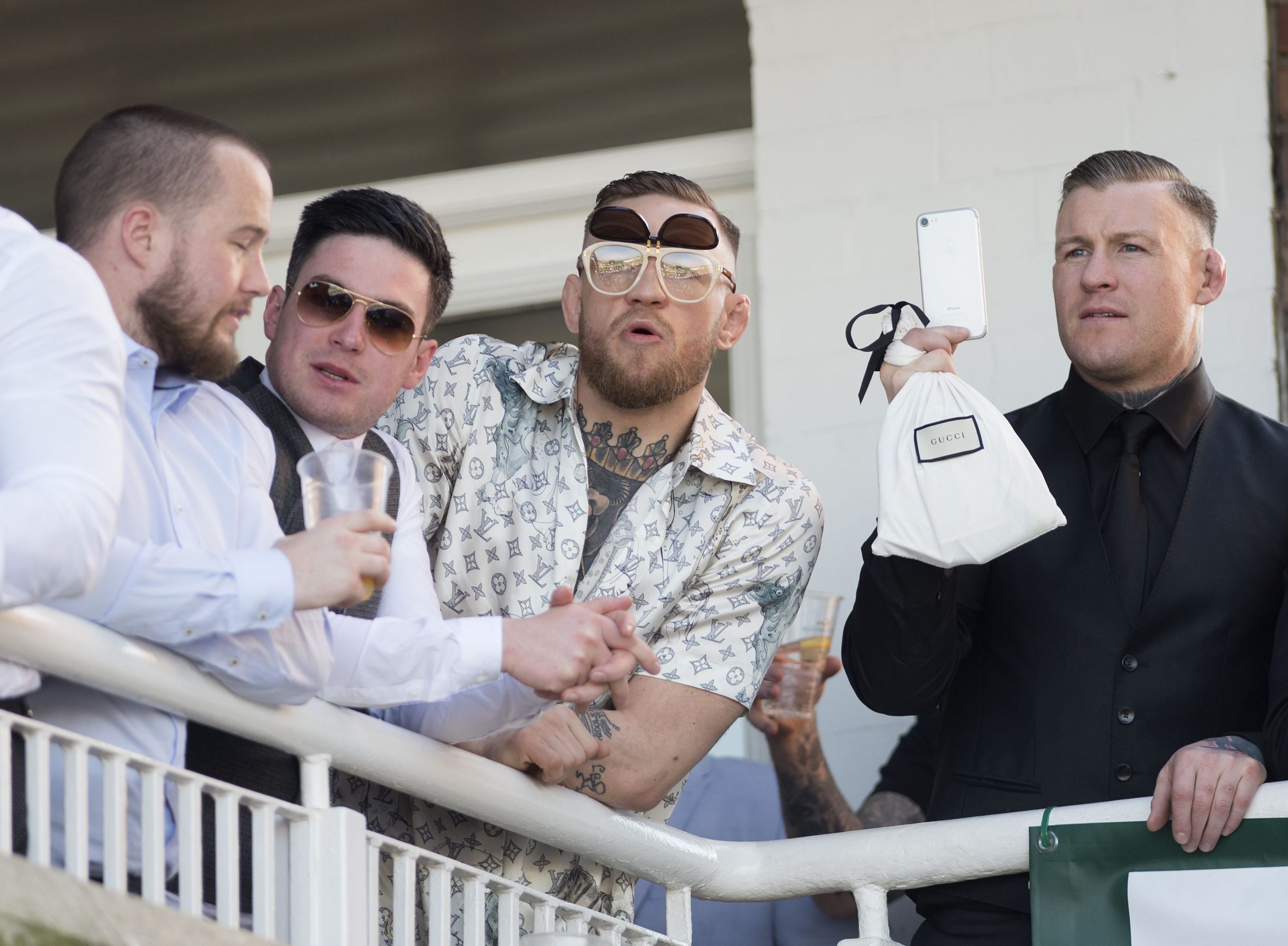 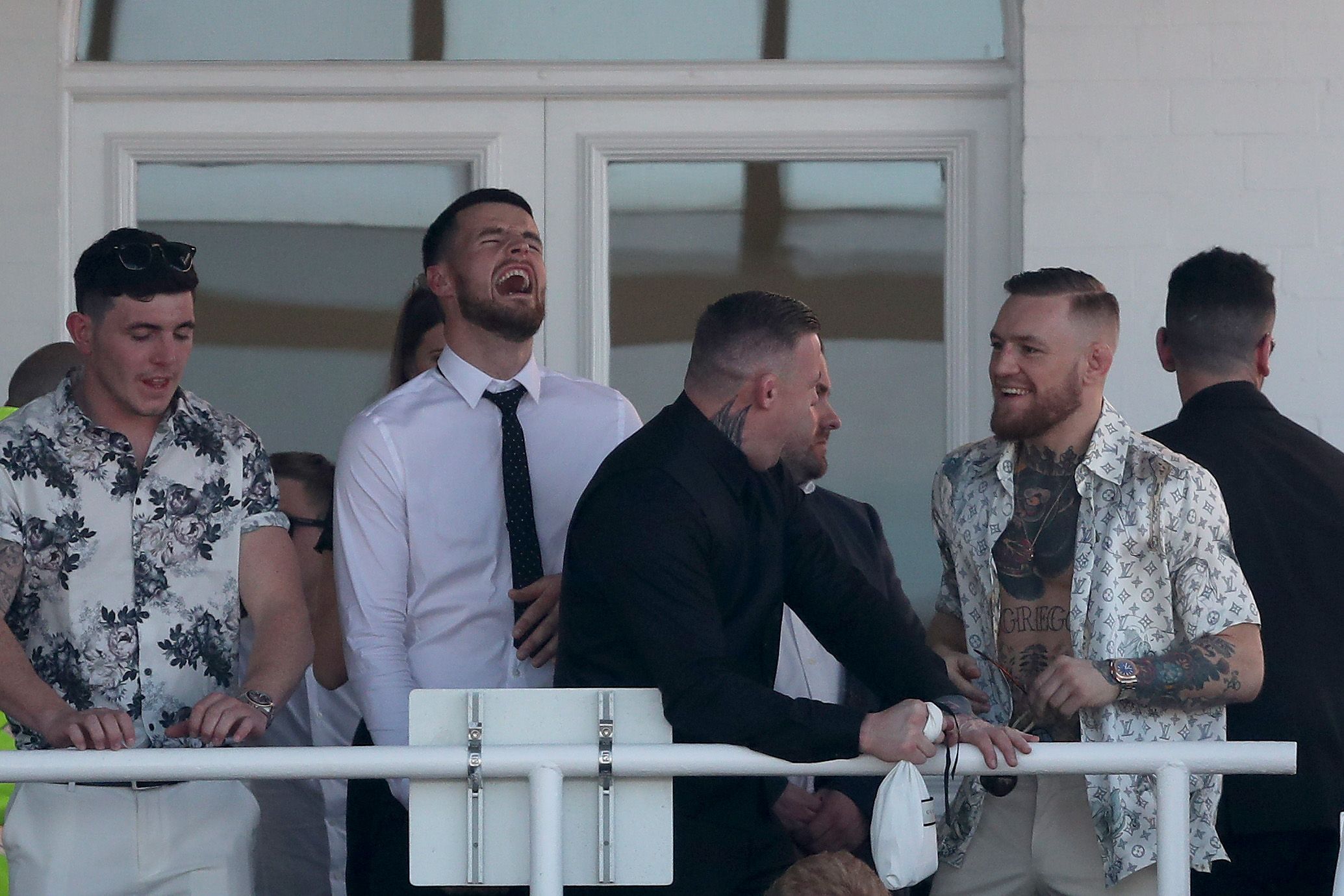 McGregor partied for three days with his entourageCredit: Rex Features

Usually a man who arrives smart for a posh occasion, McGregor turned his nose up at the strict dress code at the Grand National. With his Louis Vuitton shirt unbuttoned, flaunting abs and tattoos, he strutted around Aintree like he owned the place. The party lasted three-days for him and his entourage, who trashed the presidential suite at the Liverpool Hilton, as they soaked up the atmosphere at the gee-gees.

But that came back to bite him in the backside… 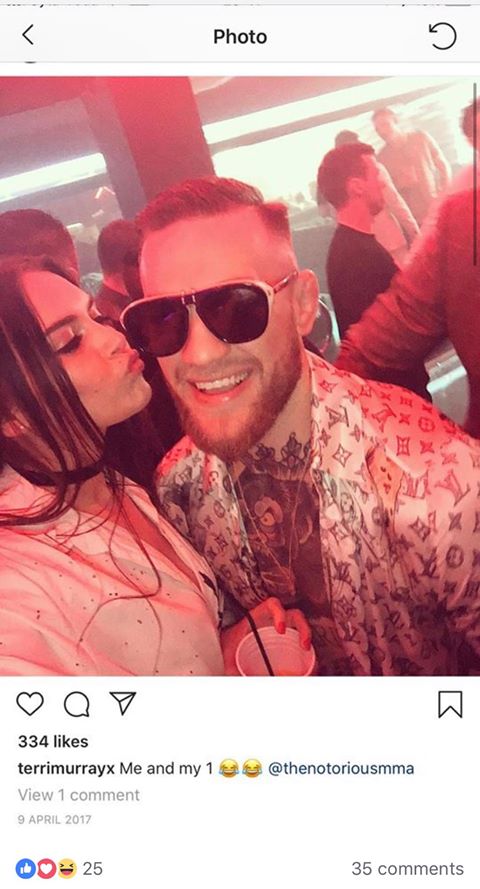 Liverpool mum Terri Murray, pictured, alleged she slept with McGregor while he partied at Aintree

Liverpool mum Terri Murray claimed McGregor fathered their child during his visit to Aintree. Her one-year-old daughter Clodagh was born nine months after she allegedly slept with the MMA star, said to have a wealth of £100m, and she demanded he take a DNA test to prove otherwise. McGregor denied he was the father, saying she slept with one of his friends.

Murray claims McGregor fathered her daughter Clodagh, which he denies

One photo taken of McGregor and Murray, allegedly in the bathroom of his hotel suite, appears to show his hand sliding up the inside of her thigh. In November 2019, McGregor, who repeatedly denied sleeping with Terri, claimed a DNA test proved the tot, named Clodagh, is not his. 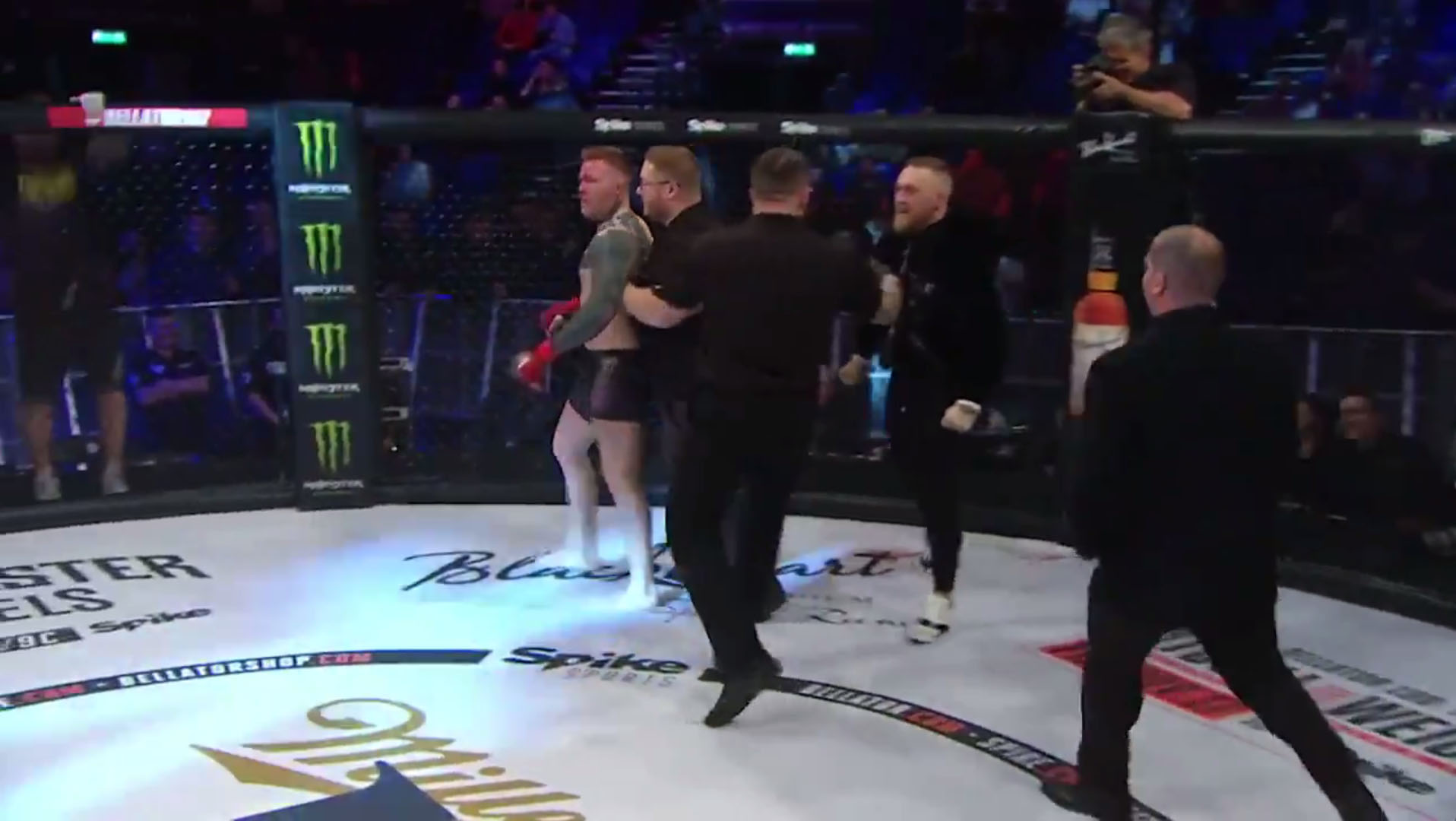 At Bellator 187, he marched into the octagon to celebrate his friend Charlie Ward’s victory

When McGregor’s mate Charlie Ward knocked out opponent John Redmond, Notorious jumped into the cage to celebrate the win. The problem was he wasn’t a licensed cornerman, and the fight was not yet declared officially over. Referee Marc Goddard stepped in to stop McGregor, who shoved him and even knocked down Redmond when he tried to get up. 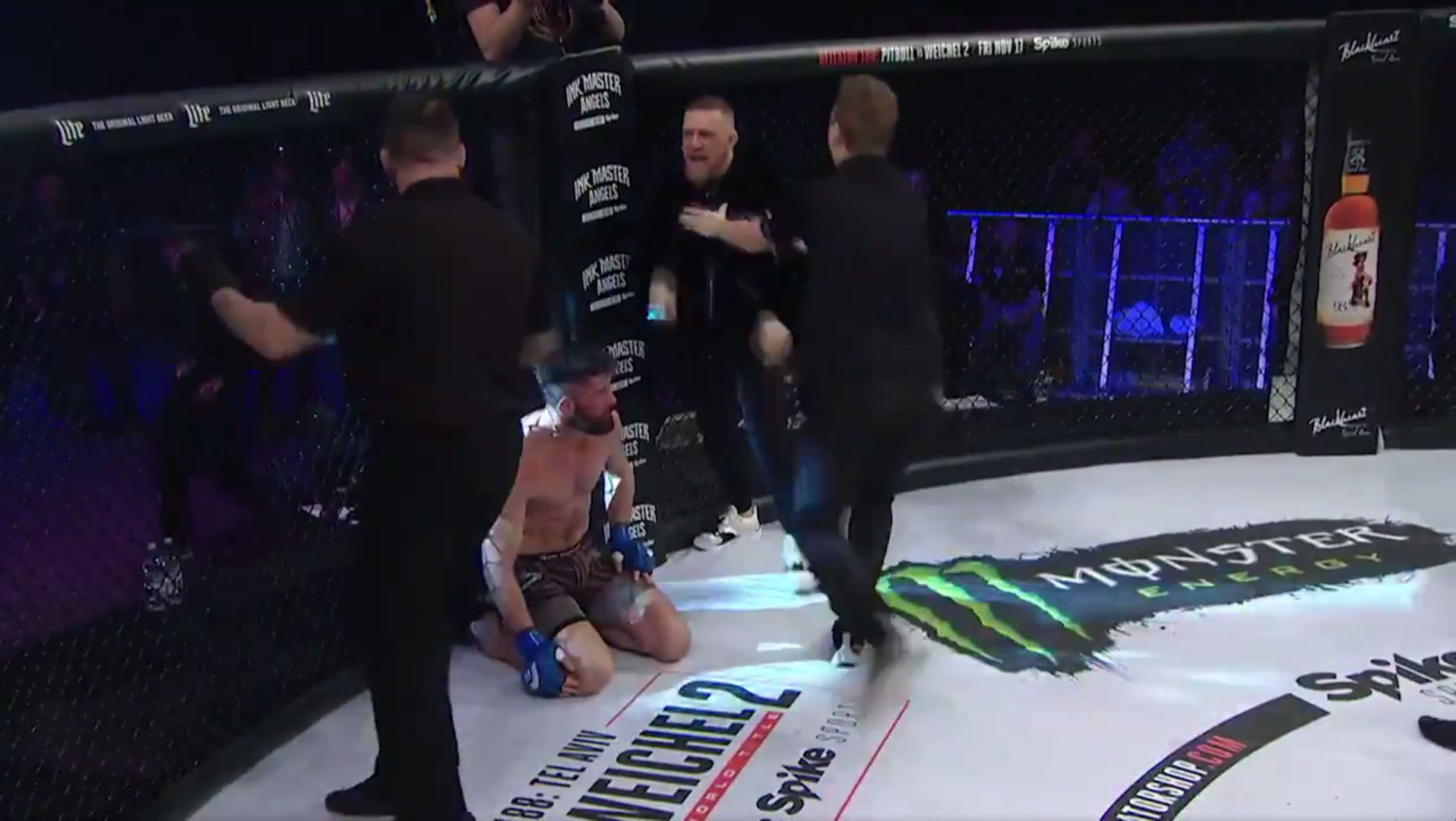 Mike Mazzulli, head of the Bellator commission said: “McGregor’s conduct jeopardized the health and safety” of fighters who were in the cage during the Ireland event. “In addition, Mr McGregor assaulted Referee Mark Goddard and a (member of) Bellator staff.”

Taking it up a level

McGregor could’ve been a villain in the James Bond movie, Spectre battling it out with Daniel Craig. 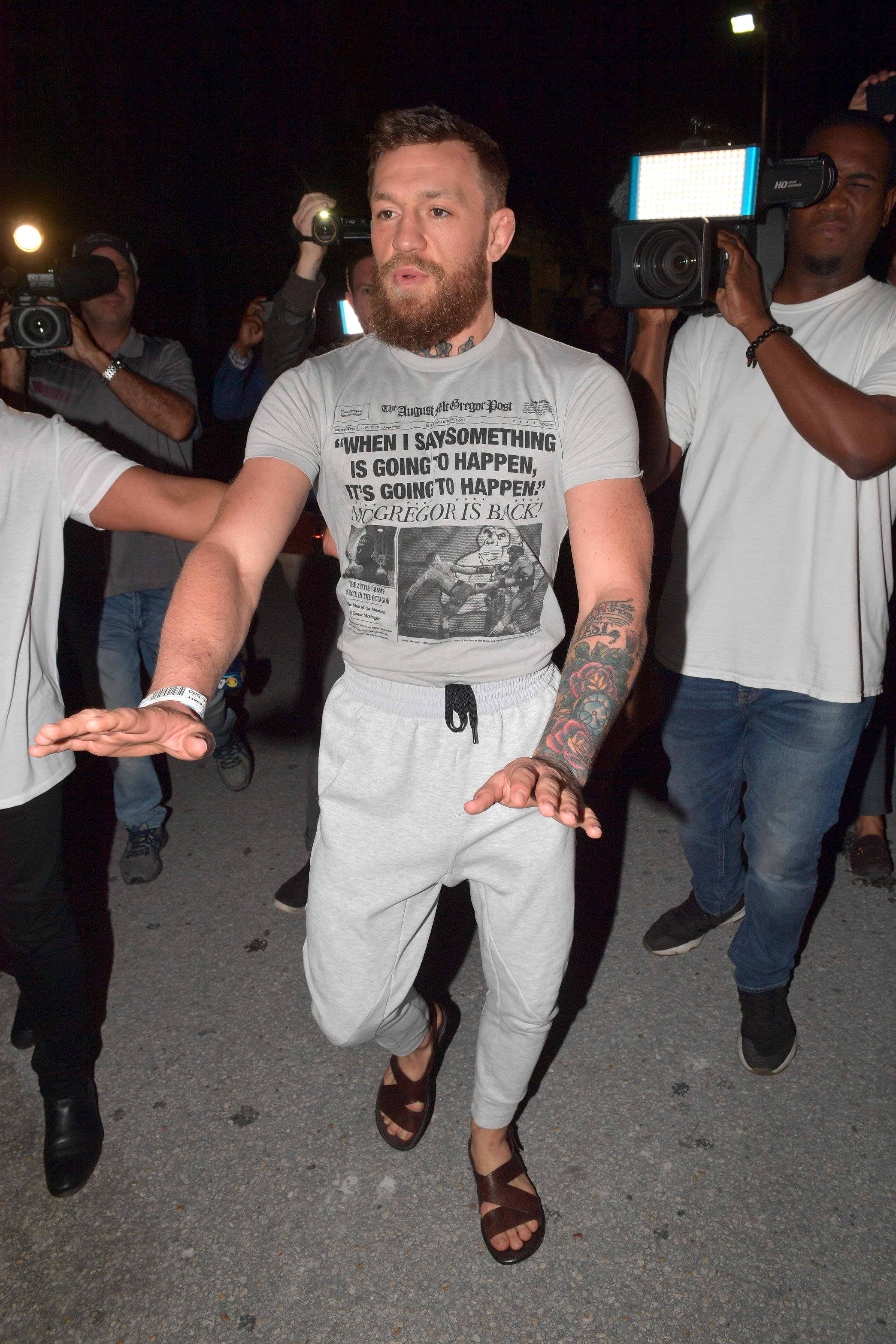 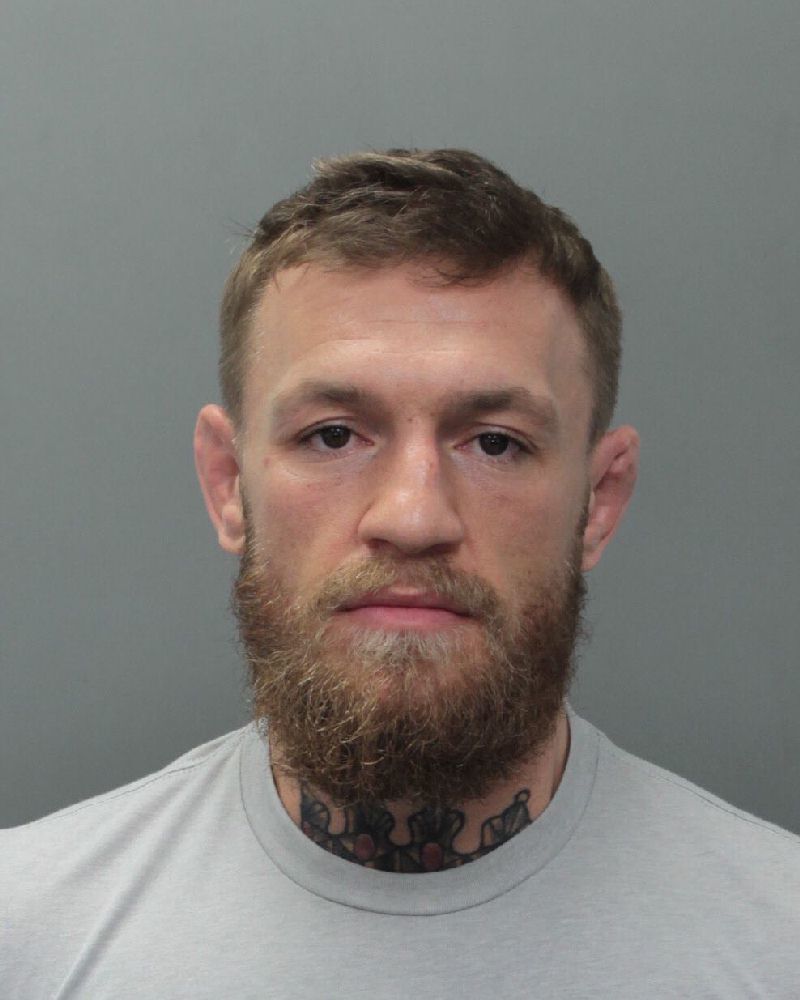 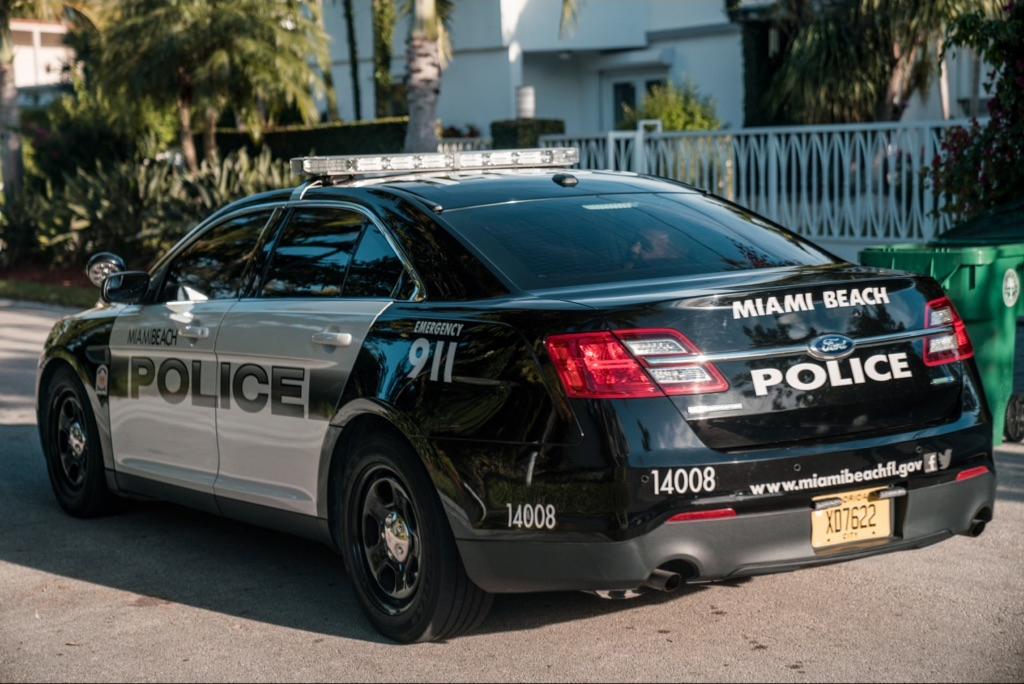 However, McGregor turned the role down to concentrate on his trainingCredit: Instagram @thenotoriousmma

Producers reportedly felt that he was perfect for the role with his popularity soaring. However, he turned down the opportunity insisting he preferred to concentrate on his training. “I’m not that person,” McGregor told The Independent. “Ya know what I mean? I’m just doing it having a laugh. Don’t start putting in those serious things.”

Upon his return to the UFC, after considering retiring, McGregor has begun a new rivalry with Dustin Poirier. In their last scrap at UFC 264, McGregor was forced to retire after a gruesome leg break. But in the build-up, he made the sensational claim that Poirier’s wife Jolie was trying to privately message him on Instagram. After his defeat, he lay fuming on the canvas getting treatment for his injury from medics and continued to shout about Dustin’s missus as his rival celebrated in the ring with his other half. It drew a response from Jolie, who gave Conor the middle finger. You can bet, though, this one isn’t over. 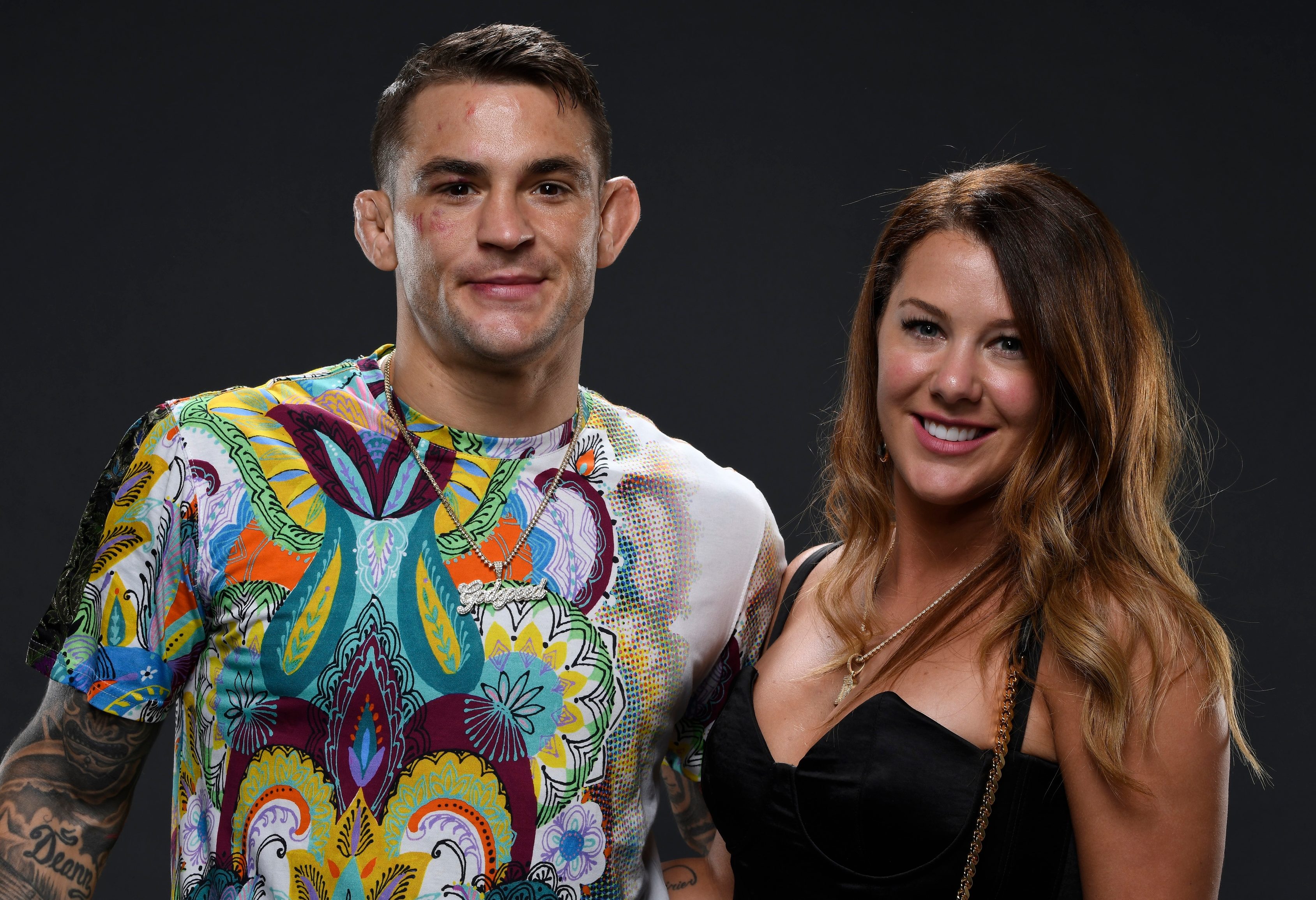 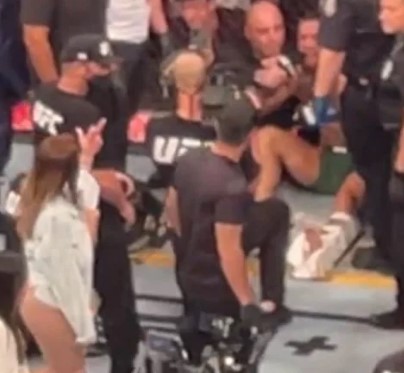 Before announcing his comeback to UFC, McGregor was filmed punching a man in a Dublin bar in April 2019. CCTV footage published by website TMZ shows the 32-year-old MMA fighter landing a blow on the drinker, in his 50s, before being ushered away by pals. The unflustered victim barely moves after the attack and remains sat on his bar stool. 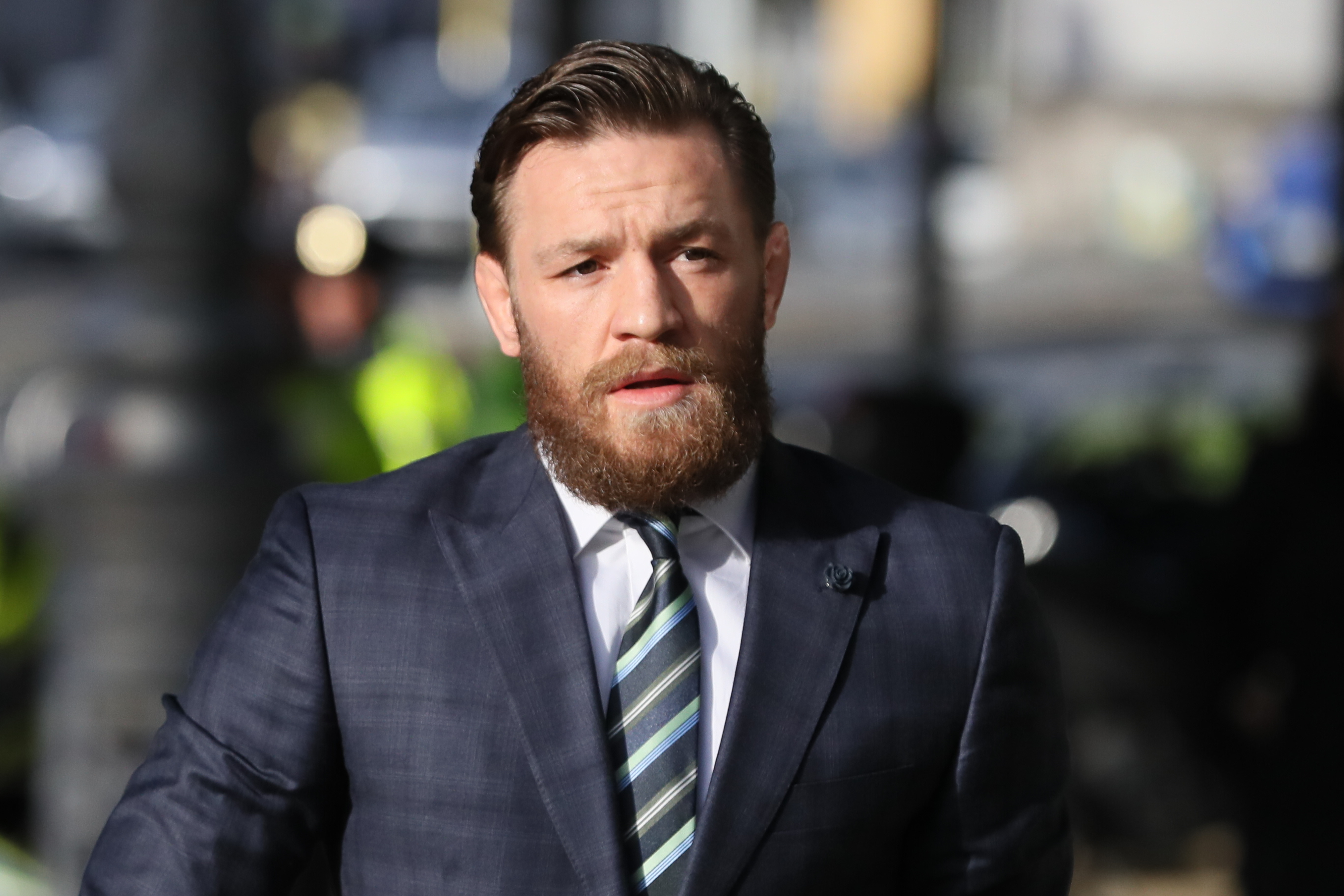 McGregor later told ESPN of his regret at the incident: “That man deserved to enjoy his time in the pub without having it end the way it did. “I tried to make amends and I made amends back then. But it doesn’t matter. I was in the wrong. I must come here before you and take accountability and take responsibility. “Whatever comes my way, I will face it. Whatever comes my way, I deserve it.” Notorious was later fined £860 after pleading guilty to the charges. 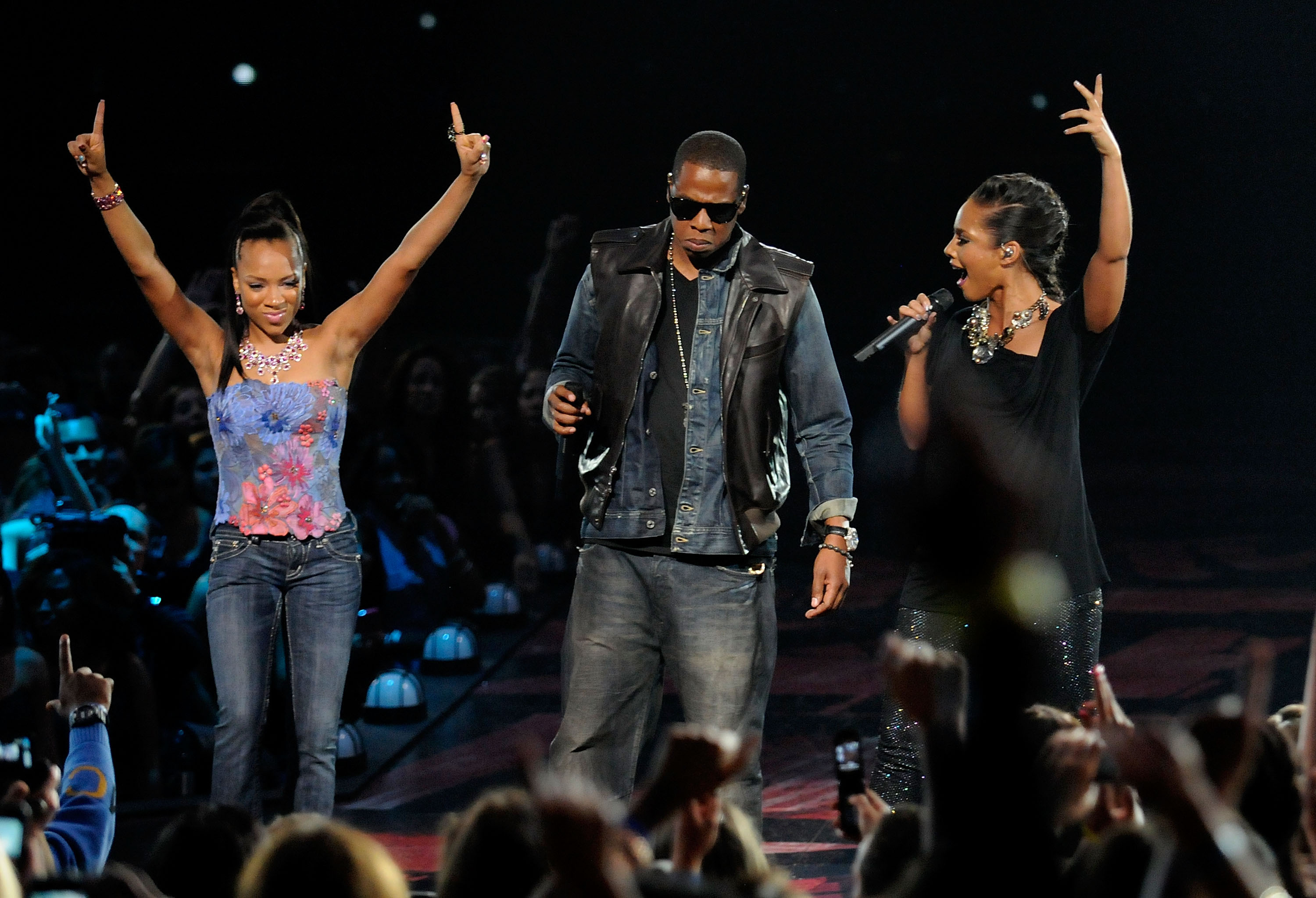 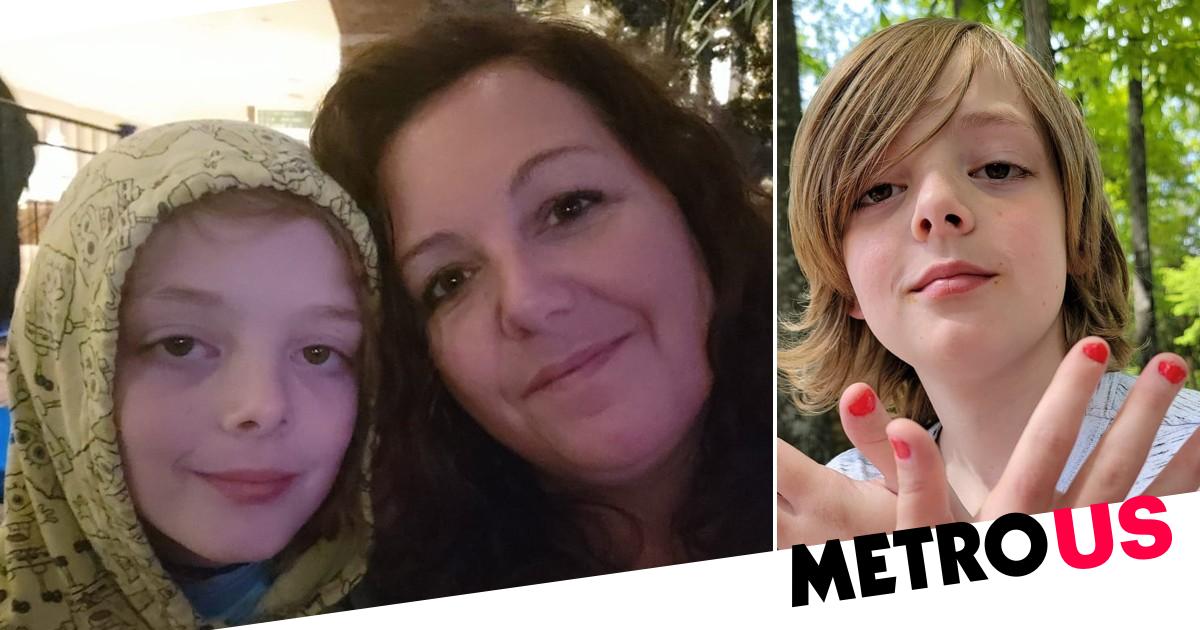