A 25-year-old climate activist went out swinging outside the US Capitol after she bit a police officer who tried to take away a baseball bat she carried.

The woman, Olivia Romano, was reportedly screaming ‘Defund the police’ and swinging the baseball bat on Friday, the final day of a week-long protest urging President Joe Biden to do more to address climate change.

When police approached Romano around 9.30am, she ‘appeared agitated’

‘The woman, who was not cooperative, started yelling at our officers,’ Capitol police told the Daily Mail. 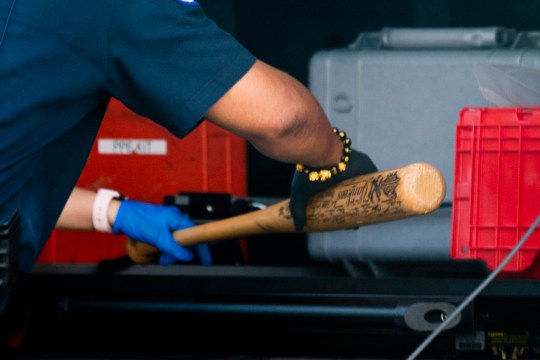 Olivia Romano’s bat is taken into evidence following her arrest, spurred from allegedly attacking a US Capitol Police officer on the West Front of the US Capitol (Picture: EPA)

Romano apparently bit an officer who had tried to take the bat from her.

Capitol police released a statement describing the moment of attack.

‘When she raised the bat, the officers attempted to take it. In that moment, the woman became combative and bit one of the officers,’ it stated.

Photos following the attack show Romano pinned to the ground by officers forcibly restraining her on the west side of the Capitol. Another photo shows her being taken away in a stretcher, arms behind her back. 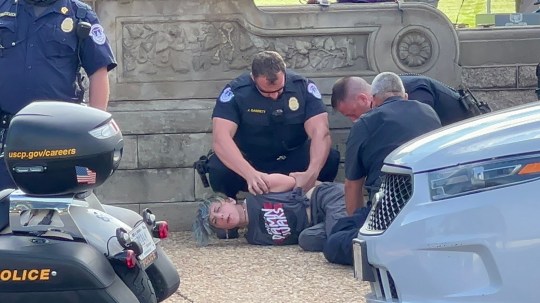 Olivia Romano, 25, was forcibly restrained by Capitol police officers who were trying to take away a baseball bat she had been swinging around during a climate change demonstration (Picture: Andrew Leyden)

Charges against Romano are pending. Capitol police have yet to determine a motive for the attack.

A total of 78 people were arrested during today’s People vs Fossil Fuels march for ‘crowding, obstructing or incommoding’.

Three of those arrested have been charged with assaulting a police officer.

Activists claim a whopping 655 people have been arrested throughout the entire week’s protests in DC, The Hill reported. 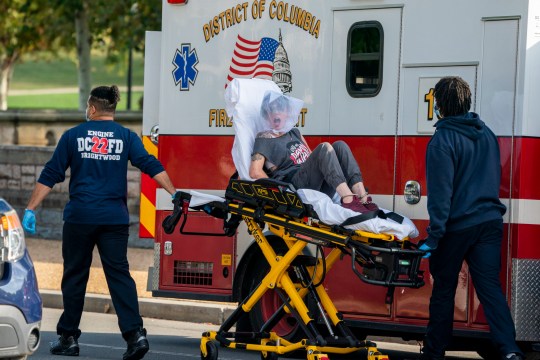 Olivia Romano was arrested after swinging her bat at and biting a Capitol police officer and removed from the People vs Fossil Fuel march on a stretcher (Picture: EPA)

For several days this week, demonstrations took place outside the White House, and on Friday at the Capitol building. The protests are mainly being led by indigenous leaders from across the US, whose communities have largely been impacted by human-induced climate change.

Protestors are looking for Biden to stop approving new fossil fuel projects and declare a climate emergency. Many say they believe Biden has not delivered on climate-related campaign promises.

They are also looking for Congress to support phasing out fossil fuel.

Democrats in Congress are currently struggling to get a spending package that will be able to tackle Biden’s ambitious climate change plan. Without a $3.5trillion budget package, it’s unclear what steps his administration will take.

The demonstrations also come in the weeks leading up to global climate negotiations at the United Nations Climate Change Conference (COP26).