Of course, any friendly advice from China to India must be taken with a pinch of salt given that two countries are locked in a border dispute in eastern Ladakh 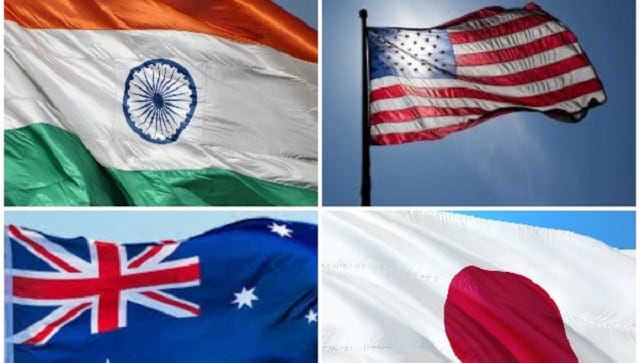 The US Navy asserting navigational rights within India’s exclusive economic zone (EEZ) without taking New Delhi’s permission has left China ample opportunity to crow about  “fissures” in the Quadrilateral Security Dialogue (QUAD) comprising of India, US, Australia and Japan.

This comes just a month after leaders of the member nations held a virtual summit vowing to expand cooperation in a range of areas and resolving to work towards a free and open Indo-Pacific.

To recap, the US Navy last week announced it conducted a freedom of navigation operation in Indian waters without prior consent to challenge India’s “excessive maritime claims.” This statement, which raised eyebrows of observers, triggered a reaction from New Delhi which said it has conveyed concerns to Washington through diplomatic channels.

The Ministry of External Affairs (MEA) also contested the US Navy’s 7th Fleet statement of 7 April that the freedom of navigation operation (FONOP) by the guided-missile destroyer USS John Paul Jones “upheld the rights, freedoms, and lawful uses” of the sea recognised in international law.

While the Pentagon later defended the US Navy’s operation as an “innocent move” and “consistent with international law”, it was too little too late where China was concerned.

In a column for the State-run Global Times on Sunday entitled India should not harbor illusions over US’ intentions, Lu Xue called Washington’s move towards New Delhi ‘unexpected’ and warned that given the Indian Ocean’s strategic position, the US will not easily discard its hegemony there, nor will it tolerate any country to share it.

This will lead to frictions in strategic interests between the two countries, the column further warned.

Another piece in the Global Times entitled ‘Intrusion’ of US warship in Indian EEZ highlights Quad’s dilemma said the US Navy’s intrusion, as the Indian media referred to it, would strengthen India’s strategic doubt toward the US.

Long Xingchun, president of the Chengdu Institute of World Affairs, further told the Global Times on Sunday that the US Navy’s move and its corresponding rhetoric was meant to deliver a clear message to India: Even though the US has boosted relations with India, the latter still cannot challenge or negate US’ “freedom of navigation” in the region, or US national interests.

“With the US warship’s transit and its aggressive narrative, India needs to re-evaluate its ties with the US, have a clearer awareness of this country and avoid any illusion toward this country,” the column warned. “Historical experience tells us that the US is a country which can turn its back on any ally, let alone India, to pursue national interests.”

Of course, any friendly advice from China to India must be taken with a pinch of salt given that two countries are locked in a border dispute in eastern Ladakh, with the latest round of India-China military talks on disengagement seeing no forward momentum.

The timing of this is interesting, coming just a week after Sergey Lavrov, the foreign minister of Russia — which has been critical of the QUAD and is drawing closer to China — at a press conference in Delhi last week referred to ”Asian NATO”.  This was seen as a move to send a subtle message to India, whose ties with Russia seem to have come under a strain.

This, despite New Delhi recently defying the threat of American sanctions to purchase from Moscow S-400 long-range surface-to-air missile squadrons.

Clearly, the Great Game in Asia is in full effect.