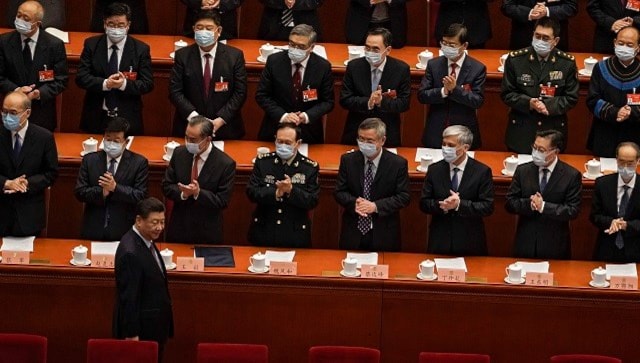 Delegates wearing face masks to help curb the spread of the coronavirus applaud as Chinese President Xi Jinping arrives for the opening session of Chinese People’s Political Consultative Conference (CPPCC) at the Great Hall of the People in Beijing, Thursday, 4 March 2021. AP

National People’s Congress spokesperson Zhang Yesui said the changes are aimed at ensuring that Hong Kong’s political system will “keep abreast of the times” under the principle of “patriots” administering the city.

Zhang gave no details about the changes, although speculation has focused on the possibility of reassigning votes in the 1,200-member committee that selects the city’s leader to deprive a small number of elected local district counselors from taking part.

Officials have also increasingly insisted that only those who prove themselves sufficiently loyal to Beijing and the ruling Communist Party may hold office.

The NPC opens Friday morning with a lengthy address from Premier Li Keqiang reviewing the past year and spelling out priorities for the coming 12 months. The vast majority of the roughly 3,000-member body’s legislative work is handled by a standing committee that meets throughout the year.

The crackdown on dissent in Hong Kong has intensified since China imposed a sweeping national security law on the city last year, bypassing Hong Kong’s local Legislative Council, saying it was necessary to provide stability after widespread anti—government protests in 2019, as well as to inculcate love of country in the former British colony.

Critics say the law and accompanying crackdown are stripping the city of many of its rights promised by Beijing at the time of its 1997 handover to Chinese rule under a “one country, two systems” framework.

vaccines and its provisioning of doses to developing countries, including 10 million donated through the World Health Organization’s COVAX initiative.

In doing so, China is seeking to protect global health without attaching “political strings” or pursuing a larger geopolitical strategy, Zhang said, echoing other recent statements from government spokespeople.

China has been criticized by the US and others for being insufficiently transparent about its handling of the pandemic in its initial stages, when the first cases were discovered in the central Chinese city of Wuhan.

Questioned on this year’s defense budget, Zhang declined to give a figure but said the spending level was appropriate for China’s security needs and to meet its international obligations. China has the world’s largest standing military and its defense budget is second only to the US, which sees in China’s assertions of territorial and maritime claims an attempt to supplant the Us as East Asia’s leading military power.

“We are committed to the path of peaceful development,” Zhang said. China’s military “doesn’t target or threaten any country,” he said.

“It is in the fundamental interest of both countries and both peoples for the two sides to work together and steadily advance US-China relations,” Zhang said. “This is also the expectation of the broader international community.”

The NPC’s advisory body, the Chinese People’s Political Consultative Conference, opened its annual session on Thursday, with chairman Wang Yang pledging support for calls that only “patriots” who show undivided loyalty to the ruling Communist Party should be allowed to hold elected office in Hong Kong,.

“We will strengthen unity and friendship with our compatriots overseas and in Hong Kong, Macao and Taiwan, and conduct studies and consultations on fostering patriotism among young people in Hong Kong and Macao,” Wang told delegates in the hulking Great Hall of the People in the heart of Beijing.

Taiwan is a self-governing democracy that China claims as its own territory.

The CPPCC has no legislative powers of its own but is mandated to conduct research and offer proposals to the National People’s Congress.

With COVID-10 on the wane in the country, the leadership decided to hold the sessions on the usual dates in March, rather than delay them until May as they did last year. However, the meetings are shorter this year and media coverage is being conducted remotely.