As the Biden administration looks at relaxing sanctions to allow

to pump oil in Venezuela again, the company is preparing to navigate myriad challenges in the country that could limit its ability to increase production quickly.

Chevron will have to manage everything from fuel shortages to accident-prone oil infrastructure to security and corruption risks that could hamper its efforts to revitalize the country’s gutted oil industry.

Some analysts said Venezuela’s oil production could increase by about 400,000 barrels a day in a matter of months to a year. That isn’t nearly enough to offset up to 2 million barrels of daily production the Organization of the Petroleum Exporting Countries and its Russia-led allies said they would cut Wednesday.

Venezuela’s state-run PDVSA has a key role in the U.S. push to replenish global oil supplies.


Venezuela is likely to hit a ceiling eventually of about 1 million barrels a day in the medium term, still well below production levels before the U.S. sanctions, said Fernando Ferreira, an analyst at Rapidan Energy.

“To get above that level would be challenging,” Mr. Ferreira said. “They’ll have to do a lot of refurbishing of the oil infrastructure, and that would require a lot of investment.”

The Biden administration is discussing a move to scale down sanctions on Venezuela’s regime provided that the authoritarian President Nicolás Maduro agrees to negotiate with the U.S.-backed opposition to organize free and fair presidential elections in 2024 and commits to other changes, according to people familiar with the matter.

Adrienne Watson, a spokeswoman for the National Security Council, said it didn’t have plans to change the sanctions policy without constructive steps from the Maduro government. Chevron spokesman Ray Fohr didn’t comment on the challenges Chevron would face if sanctions were eased but said the company is in compliance with the current sanctions framework.

U.S. officials hope Chevron, Venezuela’s state-run PDVSA and other producers can quickly extract more crude from long-neglected oil fields to help replenish tight global oil supplies that have lagged behind demand and kept energy prices elevated this year. In the near term, that might be difficult.

Chevron in 2020 wrote down its Venezuelan assets, taking a charge of $2.6 billion, just months after the Trump administration stepped up sanctions that barred U.S. companies from drilling, transporting or selling Venezuelan crude.

The speed at which Chevron could restart operations in Venezuela, primarily in the country’s Orinoco Belt in the east, will hinge largely on how quickly modifications to the Trump-era sanctions can be implemented. 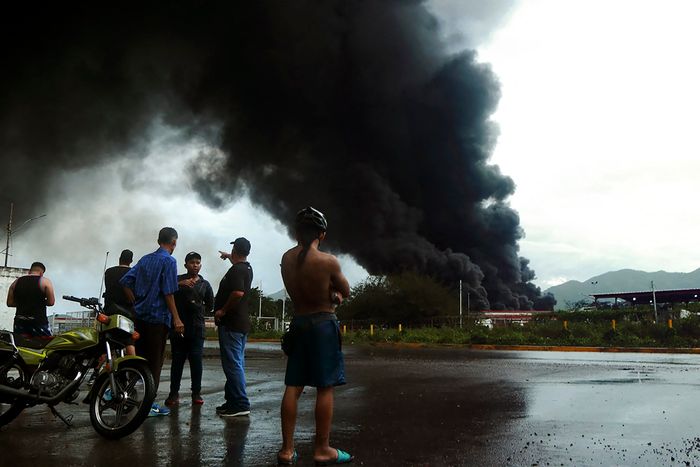 A fire attributed to lightning at a PDVSA plant in Venezuela created a plume of black smoke last month.

For example, since the U.S. imposed oil sanctions, the country has struggled to get enough diluents—liquids that ease the flow of Venezuela’s viscous oil, once primarily sourced from the U.S. Without that, Chevron will struggle to increase production by much, analysts said. PDVSA has resorted to using condensate from Iran, considered a less-efficient diluent than naphtha from U.S. refineries.

Another major problem that projects face is the shortage of qualified professionals, according to Ivan Freites, a veteran oil workers union leader who has criticized Mr. Maduro. Political persecution and the economic meltdown in recent years have pushed tens of thousands of oil engineers, geologists and welders out of the country. They are among the 6.8 million people that have fled Venezuela during Mr. Maduro’s tenure, according to the United Nations.

In addition, the once-thriving Venezuelan oil industry has been plagued by looting, with local communities and even desperate laborers pillaging installations for everything from copper wiring to pumps to pipes for scrap metal. One of Chevron’s joint ventures in the country, Petroboscan, which produces oil used to make asphalt, has been a prime target for theft, the union leader said.

Chevron’s larger venture, Petropiar, where Venezuela’s tar-like heavy oil is mixed with diluents to make it easier to transport, has faced allegations that PDVSA’s managers in the project robbed it of hundreds of millions of dollars through rigged tenders, kickbacks and overpriced supplies. Those accusations have led to scores of arrests in the past during antigraft crusades led by Mr. Maduro. Many of the president’s closest allies, as well as military leaders, continue to hold senior positions in the oil industry.

“We want people to be able to work and live better, so if a company like Chevron wants to come back, I think that’s great,” said Mr. Freites. “But when you look at the dire situation in the sector today, it’s not going to be easy to operate.”

Luis Pacheco, PDVSA’s former corporate planning executive director and current nonresident fellow at the Baker Institute Center for Energy Studies at Rice University, only sees Chevron producing 100,000 extra barrels a day of crude oil in a few months and 200,000 more in 24 months. He points to technical challenges such as rising water leaks in aging oil fields and unstable electricity supply.

“The technical problems are solvable with time and money,” Mr. Pacheco said. “But the extra oil is really marginal.”

Chevron has been operating in Venezuela for about a century and built a close relationship with the leftist government that has ruled there for more than two decades. During the first 25 days of September, it produced about 45,000 barrels a day, including about 27,680 barrels a day from its Petropiar venture, according to the consulting firm IPD Latin America. If sanctions were lifted, Chevron would aim to lift its output to almost 200,000 barrels a day in about a year, according to people familiar with the matter.

Projections of how much extra oil Venezuela can produce vary widely, partly because of the many unknowns in Chevron’s new 1,000-page contract with PDVSA that it hopes to implement, and the breadth of pending U.S. licenses.

What is your outlook on the oil industry? Join the conversation below.

Among the many institutional and financial unknowns is whether a new license would restrict oil-sales revenue to pay down PDVSA’s accumulated joint-venture arrears to Chevron, or whether the U.S. oil major would pay a royalty directly to the Maduro government, according to

a senior research scholar at the Center on Global Energy Policy.

Despite the limited upside for Chevron in the near term, Mr. Pacheco said: “There is a lot of corporate pride there. They went in deep with the government, lent money to Venezuela, did a lot of lobbying, so they have a legitimate interest in going back.”