The court, on Tuesday, had found the two guilty of the murder of Sister Abhaya, who was found dead in a well in St Pius Convent in Kottayam in Kerala in 1992 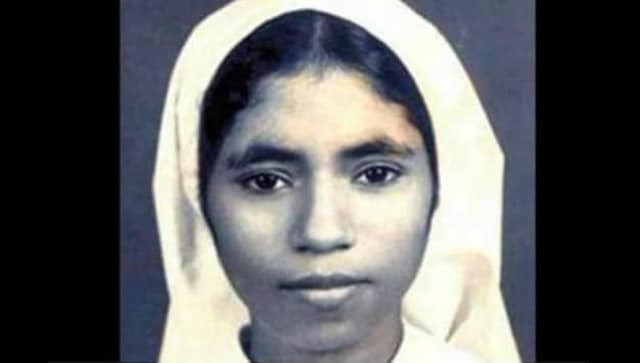 According to the charge sheet, on the night of 27 March, 1992, Sister Abhaya (in picture) had allegedly saw Father Thomas Kottoor and Sister Sephy in a compromising position, following which the accused hacked her with an axe and threw her into the well. Image courtesy: News18

Thiruvananthapuram: A CBI special court in Thiruvananthapuram on Wednesday awarded life imprisonment to the catholic priest and nun, who were found guilty of the murder of Sister Abhaya 28 years ago in Kottayam. Special CBI Judge K Sanal Kumar awarded a double life sentence to Father Thomas Kottoor and imposed a fine of Rs 6.5 lakh.

Whereas the other accused in the case, Sister Sephy, was sentenced to life and a fine of Rs 5.5 lakh was slapped on her. The court had on Tuesday found the two guilty of the murder of Sister Abhaya, who was found dead in a well in St Pius Convent in Kottayam in 1992.

The court also sentenced the duo to seven years of imprisonment for tampering with evidence. However, the sentences shall run concurrently, the court said.

While pronouncing the verdict on Tuesday, the court had said the murder charges against the two accused will stand. The detailed verdict is not out yet.

The accused, who were on bail, were taken into judicial custody on Wednesday after the mandatory COVID-19

testing and police had shifted Father Kottoor to Poojapura Central Jail and Sister Sephy to Attakulangara women’s prison in Thiruvananthapuram. Abhaya(21), a second-year student of the BCM college, Kottayam, was staying at St Pius convent.

Another accused in the case, Fr Jose Puthrikkayil, was discharged earlier following lack of evidence. Initially, the case was investigated by the local police and state crime branch, which concluded that Abhaya had committed suicide.

The CBI took over the probe on 29 March, 1993, which also filed three closure reports saying though it was a case of murder, but the culprits could not be found out. However, on 4 September, 2008, the Kerala High Court came down heavily on CBI over the handling of the Sister Abhaya murder case and said the agency was “still a prisoner of those who wield political and bureaucratic power” and directed that the probe be handed over by the Delhi unit to its Kochi counterpart.

Subsequently, the central agency in 2008 arrested two priests — Fr Thomas Kottoor, Fr Jose Poothrikkayil — and a nun Sister Sephy on the charge of murder. According to the prosecution, Kottoor and Poothrikkayil were allegedly having an illicit relationship with Sephy, also an inmate of the convent.

On the night of 27 March, 1992, Abhaya allegedly saw Kottoor and Sephy in a compromising position, following which the three accused hacked her with an axe and threw her into the well, it had said in its charge sheet. The accused were arrested in 2008 and released on bail by the Kerala High Court a year later.