LONDON—Business groups are calling for more time to adjust to Britain’s new trade agreement with the European Union, saying new rules set to come into force next week risk disrupting the $590 billion-plus annual trade in goods that previously flowed freely.

The U.K. and EU said Thursday they had signed an agreement over their future relations, setting the seal on the 2016 British referendum decision to leave the bloc. That was a relief for businesses that feared four years of politically charged negotiations could end without a trade pact, resulting in tariffs on goods for both sides.

But despite the reprieve, for the first time in almost half a century, food, motor vehicles and other goods moving between the EU and U.K. will from Jan. 1 face customs checks and need to meet separate sets of standards and regulations.

The British government estimates there will be 215 million extra customs declarations a year, nearly 600,000 a day, which businesses say will take time and cost money to organize. Some companies will need to pay inspection fees, seek import licenses and figure out how to account for value-added tax. British food and animal exports to the EU will be checked on arrival, while some professional qualifications will no longer be automatically recognized. Some businesses say they don’t yet know fully how they will respond because they have yet to see the details of the trade agreement.

Predicting long lines at British and European ports, and reams of new paperwork, business groups are now calling on both the U.K. and EU to help companies navigate the changes and mitigate any new frictions to trade, including giving firms time to adjust to new rules.

“Coming so late in the day it is vital that both sides take instant steps to keep trade moving,” said Tony Danker, the director general of the Confederation of British Industry. The business lobby group wants a six-month grace period to allow companies to adjust to the new rules without being penalized.

Businesses face “the gargantuan task of adapting to new arrangements with scarcely a week before they take effect,” said Adam Marshall, the director general of the British Chambers of Commerce. Many companies are already grappling with the pandemic and have staff away for the Christmas holidays, he said, requesting new rules be phased in.

The American Chamber of Commerce to the EU also called for new rules to be phased in, saying members were concerned about how quickly they would need to adapt. Asked at a briefing Thursday about possible leeway for companies, an EU official said “there is no grace period in this agreement…We think that companies have had a lot of time to prepare for this.”

A spokesman for the U.K. government said it was making preparations for the coming changes, including investing in jobs, technology and infrastructure at the border. He also said border controls would be implemented in stages.

Fearing extra paperwork and transport disruption, pharmaceutical companies such as

built up inventories and plane maker

On Thursday, Airbus said it was pleased the potential disruption of a no-deal scenario had been avoided but that it still needed to analyze the consequences of the agreement on its business.

“Although a free trade deal is a major relief, it is still a lot more complex to do business in Europe than it was when we were in the EU,” said

Extra red tape could cost British businesses around 17 billion pounds, equivalent to roughly $23 billion, a year, and EU-based businesses about £14 billion, according to estimates from law firm Clifford Chance.

EU- and U.K.-based meat exporters, for instance, will now need a certificate—confirmed by a veterinarian—showing that every package they sell complies with the other’s health standards. British exporters say there aren’t enough veterinarians for this certification. 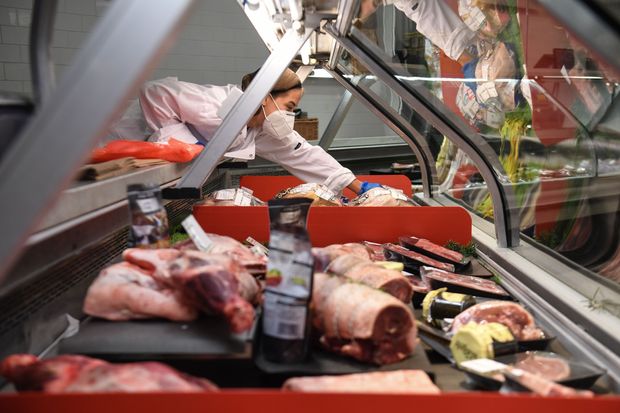 A staff member restocks the meat counter in Selfridges department store in London.


Anticipating delays at the border, Delamere Dairy has been stockpiling packaging and ingredients at its site in the north of England since November.

“We’re concerned about the potential disruption in ports, you don’t want your packages sitting in a seven-mile queue when you need them to pack products,” said Ed Salt, Delamere’s managing director. Even though it mostly sells in Britain, the company sends goats’ milk to be packaged in Germany before it returns to the U.K.

It also will have to heat-treat the pallets it uses to ship products to comply with EU rules for pallets coming from outside the bloc.

EU-based companies sell more goods and services into Britain than the U.K. does into Europe. But the U.K.’s trade in goods with the EU is a bigger percentage of its gross domestic product, at around 13%, than Europe’s exposure to Britain, at nearly 3% of GDP.

Some parts of the bloc are particularly exposed to trade with the U.K., though. 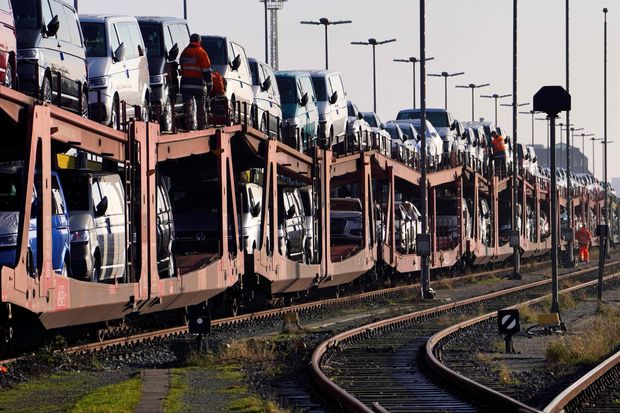 A cargo train is unloaded in Cuxhaven, northern Germany.

Britain is responsible for 10.5% of Ireland’s exports and 27% of its imports, according to the Organization for Economic Cooperation and Development, while Germany has a £29 billion trade surplus in goods with the U.K., mostly because of the nearly 600,000 cars it sells to Britons each year.

Few industries will likely feel the disruption more than the $88 billion two-way trade in cars between Britain and the EU.

The U.K. is Europe’s second-largest market for cars and the country’s biggest sellers—

—mainly assemble their vehicles in the EU.

Last year, around 13% of cars produced in Germany went to the U.K., while Britain is Ford’s third-largest market globally, accounting for around 30% of its sales in Europe.

Meanwhile, British-made components, including engines for Ford vehicles, are exported to European factories that produce vehicles to be sold around the world.

The European Automobile Manufacturers’ Association said it couldn’t make a full assessment of the trade deal until all the details were public but that nonetheless, “major challenges still lie ahead.”

“Trade in goods will be heavily impacted by barriers to trade in the form of new customs procedures,” it said.

idled a car factory in England earlier in December after running short of key parts. It blamed congestion at British ports, under pressure amid Brexit and Christmas-related stockpiling, as well as disruption caused by the pandemic.

Lines of trucks queued to cross the English Channel ahead of the U.K.’s scheduled departure from the EU single market. (Originally published Dec. 15, 2020)

Some car companies, such as Aston Martin Lagonda Holdings PLC, have said they may fly parts into the U.K. to get around future disruption. The maker of fictional British spy James Bond’s car sources 50% of its components abroad.

Analysts are particularly concerned about volume producers like Ford,

which deploy just-in-time supply chains where the arrival of parts is coordinated closely with assembly.

Toyota, for instance, has typically held only four hours on the production line at its U.K. car plant. In 2015, a three-week strike by French ferry staff disrupted its operations for two months.

“Incredibly complex supply chains are the issue, when you have been operating your plants for two decades on the notion of a single market,” said

an auto analyst at GlobalData.