From the 1857 Sepoy Mutiny to the infamous Indian National Army Trials, the Red Fort has played a crucial role in becoming a foreground of resistance. It is here where Jawaharlal Nehru hoisted the Indian flag, a tradition that has continued until today

Since 1947, India’s prime ministers have hoisted the tricolour here and addressed the country from the rampart adjacent to Lahore Gate. But why is the iconic site central to our I-Day festivities?

We take a look at the long and storied history of the Red Fort.

Built between 1638 to 1649 by the Mughal emperor Shah Jahan, the Red Fort was not just an architectural marvel – it was the seat of power during the Mughal era. It was after the inauguration of this palace citadel that Delhi became the capital of the empire and remained so until the end of the Mughal rule in 1857.

Following Aurangzeb’s reign, the grandiosity of the palace started dwindling as the later Mughal rulers could not take on invaders like Nadir Shah of Iran who looted massive booty from the fort.

Subsequently from mid to late 18th century, attacks from the Marathas, Jats, Sikhs and Gurjars further weakened the Mughal influence on the palace.

By the 19th century, the British expanded their influence in northern India and finally captured Delhi in 1803. Without losing any more time, they started taking control of the Red Fort, knowing well that it was the place which will bring them all kinds of trouble. And it did. In 1857, rebellious sepoys reached the doors of the Red Fort, asking Mughal emperor Bahadur Shah Zafar to lead the mutiny against the British. Soon, the palace became the central point of the colonial administration’s plan to suppress the rebellion.

The 1857 rebellion was the first major uprising against colonial rule – the Sepoy Mutiny was the first formal war of Independence. It was during this revolt that the Red Fort emerged as an important symbol of the Independence movement since the palace emerged as the foreground of sepoy resistance against Britishers.

After suppressing the rebellion and regaining control over Delhi, the British killed most of Bahadur Shah’s sons and made the emperor a prison in his own home. But this was not the end of it.

Even after the revolt of 1857, the colonial rulers destroyed the inner structures of the Red Fort. Precious artwork, stones and jewels were looted from the palace and Mughal structures like the harem courts, the royal store rooms and kitchens were vandalised.

Historian KN Panikkar told The Wire that even as a failure, the 1857 revolt served as a source of inspiration for the freedom struggle.

According to Amar Farooqui, a historian and the author of Zafar and The Raj, Subhas Chandra Bose, who headed INA, invoked the Red Fort in his famous call Challo Dilli, according to a report in The Wire. Bose or ‘Netaji’, as he was famously called, said, “Our task will not end until our surviving heroes hold the victory parade on the graveyard of the British Empire, at the Lal Quila, the Red Fort of ancient Delhi.” 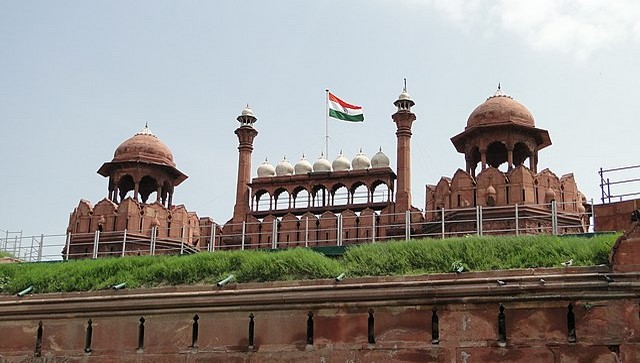 India’s prime ministers have hoisted the Tricolour here and addressed the country from the rampart adjacent to Lahore Gate at Red Fort. Image Courtesy: Wikimedia Commons

From 1945 to 1946, Red Fort was chosen as the location to conduct the court martial of three officers of the INA – Shah Nawaz Khan, Prem Sehgal and Gurbaksh Singh Dhillon. According to a report in The Print, the officers were charged for “waging a war against the king” as they had changed their allegiance during the Second World War. Initially fighting for the British cause, thousands of Indian officials joined the newly constituted INA and assisted the Japanese to fight the English.

Due to the trials, protests and demonstrations were organised across the country. These agitations further solidified the Indian Independence movement.

The nationwide campaign that was waged for the release of the officers further reinforced the public perception of the Red Fort as a symbol of anti-colonial resistance.

A legacy left behind by Nehru

Finally in 1947, as India’s first prime Jawaharlal Nehru replaced the colonial flag with the Indian National flag, the Red Fort cemented its place in modern history.

It’s been 75 years. Since then every prime minister has hoisted the national flag here and given a speech from its rampart. It has now become an Independence Day tradition.

Hundreds and thousands of people gathered to hear the country’s first PM speak and celebrate freedom.