Brooklyn subway shooting suspect Frank James reportedly called police with his location – while another man who spotted him and alerted cops said he does not want any reward money.

New York police received a tip on Wednesday – from James himself – that he was in a McDonald’s in the East Village neighborhood of Manhattan, two law enforcement officials said on condition of anonymity. He bizarrely told authorities to come get him.

‘A call came into Crime Stoppers… The guy says, “You know, I think you’re looking for me. I’m seeing my picture all over the news and I’ll be around this McDonald’s,”’ a law enforcement source told the New York Post.

James, 62, was no longer at the McDonald’s when cops arrived.

Meanwhile, security worker Zack Tahhan said he recognized the alleged gunman while fixing a convenience store camera in the East Village and ‘started jumping up and down and screaming’.

Tahhan said bystanders ‘thought he was crazy’ but that he ran after James and flagged down a police car to arrest the suspect.

Law enforcement officials who announced James’ arrest in a briefing on Wednesday afternoon did not mention Tahhan’s involvement. It is not clear if Tahhan will receive the $50,000 reward that was offered for information leading to an arrest. 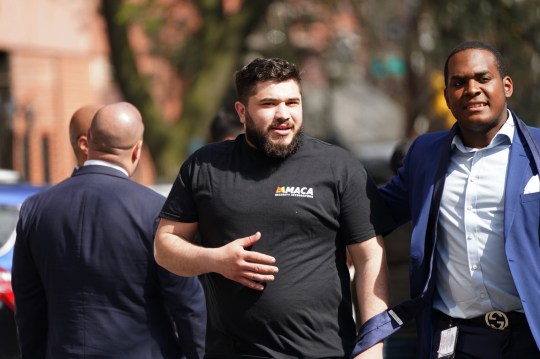 A crowd hailed Tahhan as a hero, chanting that the $50,000 reward should be doubled to $100,000 and that he should quickly claim it. But Tahhan, who is from Syria and works for MACA security integrators, said he does not plan to collect any reward.

‘Money is not important to me,’ Tahhan said, according to the Daily Mail. He added that he ‘just wanted to do the right thing’.

Three police officers apprehended James on First Avenue near St Marks Place on Wednesday afternoon, without incident. He allegedly set off a smoke grenade on a northbound N train in Brooklyn on Tuesday morning and opened fire, shooting 10 people and injuring 19 others.

‘Oops, my bad,’ said James according to witness Fitim Gjeloshi, who was near him on the train and emerged from the mass shooting unscathed.

James is awaiting arraignment on a federal terrorism charge in connection with the mass transit massacre. If convicted, James could face a sentence of up to life in prison, said Breon Peace, US Attorney for the Eastern District of New York.