LONDON—The British government laid out plans to increase its stockpile of nuclear weapons as part of a shift in defense policy that recognizes that the world order it helped forge in the wake of World War II is crumbling.

Following its exit from the European Union last year, Britain is looking to carve its place in a more volatile and fragmented international system while bolstering its economy through greater global trade.

said that requires the U.K. to become a nimble power broker with a greater sway in the Indo-Pacific region backed by an increase in domestic investment in science and technology.

“The fortunes of the British people are almost uniquely interlinked with events on the far side of the world,” Mr. Johnson told Parliament as he presented a blueprint for Britain’s post-Brexit foreign-policy aspirations. “The U.K. could never turn inwards or be content with the cramped horizons of a regional foreign policy,” he said.

Brexit has long been touted by government officials as a way for Britain to quickly adapt to global challenges unencumbered by the EU. The government’s 114-page review paints a gloomy picture for the coming decade.

The report warns globalization’s retreat, which began after the financial crisis, will continue to exacerbate divisions between nations. The use of novel chemical and nuclear weapons will also proliferate, the review says, as challenges to U.S. supremacy mount. “A defence of the status quo is no longer sufficient,” it concluded. 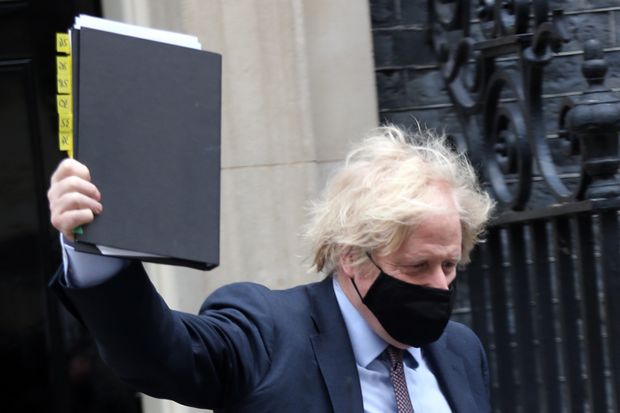 British Prime Minister Boris Johnson left Downing Street ahead of making his statement in the House of Commons on Tuesday.

Reflecting this outlook, Britain is bolstering its nuclear threat as a deterrent. Britain had been on track to reduce its nuclear warhead stockpile to not more than 180 warheads by the mid-2020s.

However, faced with growing threats, this ceiling will be lifted to not more than 260 warheads. The government will no longer provide figures on how many of the warheads are operational.

Currently, the U.K. has a stockpile of 190 warheads, according to the Federation of American Scientists. Its stockpile will remain the lowest among the declared nuclear powers, which include neighboring France.

Some analysts questioned the move. After spending years railing against nuclear proliferation, raising this cap “is a major diplomatic mistake,” said Nick Witney, former chief executive of the European Defence Agency. “It provides greater arguments for proliferators around the world.”

After Brexit, a series of trade-offs loom. To pay for a new-look military, the U.K. will have to dial back spending on more conventional armed forces. It will bid to secure deeper relations in the Indo-Pacific region, even as officials say it won’t turn its back on Europe.

Underscoring this complex balance: Britain will aim to expand economic relations with China while criticizing its human rights record and trying to contain Beijing’s threat to Britain’s national security.

“We have a balance to strike,” said Mr. Johnson, adding that now wasn’t the time for a Cold War with China. This year the British aircraft carrier HMS Queen Elizabeth is due to conduct patrols in disputed waters in the South China Sea amid rising tension with Beijing.

Much of the review is shaped by Britain’s experience during the Covid-19 pandemic, when the country’s reliance on extended global supply chains left it vulnerable to borders shutting down.

Meanwhile, its successful vaccine development and rollout has turned into a soft-power victory. 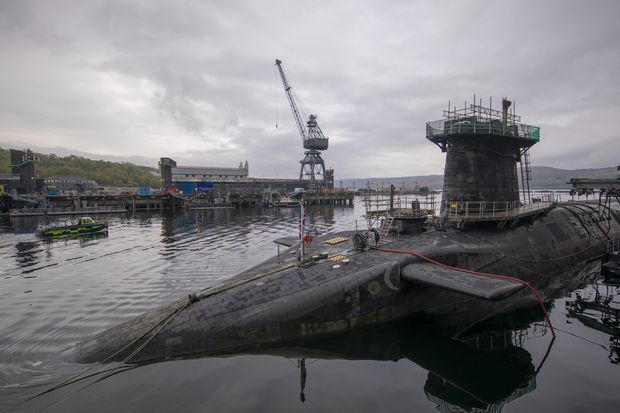 HMS Vigilant, one of the submarines that make up the U.K.’s nuclear deterrent, in Faslane, Scotland, in April 2019.

Britain’s foreign policy will now be underpinned by a large-scale domestic spending program aimed at bolstering British research and development. The U.K. aims to direct at least £6.6 billion, equivalent to $9.18 billion, of defense funding over the next four years to areas including space, directed-energy weapons, and advanced high-speed missiles

“It feels like the U.K. approach is becoming more French and less liberal,” said Malcolm Chalmers, the deputy director general of the Royal United Services Institute, a defense think tank. “It is putting more focus on our national technology base.” France has previously championed building up its domestic defense and technology capabilities.

How this overhaul is paid for will be detailed next week when the government outlines a series of cuts to the country’s military. Analysts expect the government to cut the number of soldiers, jet fighters and frigates to pay for the rejigger. But Britain’s finances are already stretched following the pandemic, raising questions over how or if the new strategy will be properly implemented, said Mr. Witney.

The review states that the U.S. will remain the U.K.’s most important ally both commercially and militarily. Britain will continue to view Russia as its number one adversary and Britain will try to build diplomatic ties in the Indo-Pacific region.

It has applied to become a partner of the Association of Southeast Asian Nations and is seeking to join the trans-Pacific free-trade agreement. Mr. Johnson is due to visit India soon.

Last year, the U.K. government announced its biggest increase in military spending since the Cold War in a bid to secure its position as the U.S.’s main military ally in Europe after Brexit. The country will spend an additional £24.1 billion over the next four years compared with last year’s budget. This, the government says, reaffirms Britain’s attachment to the North Atlantic Treaty Organization.