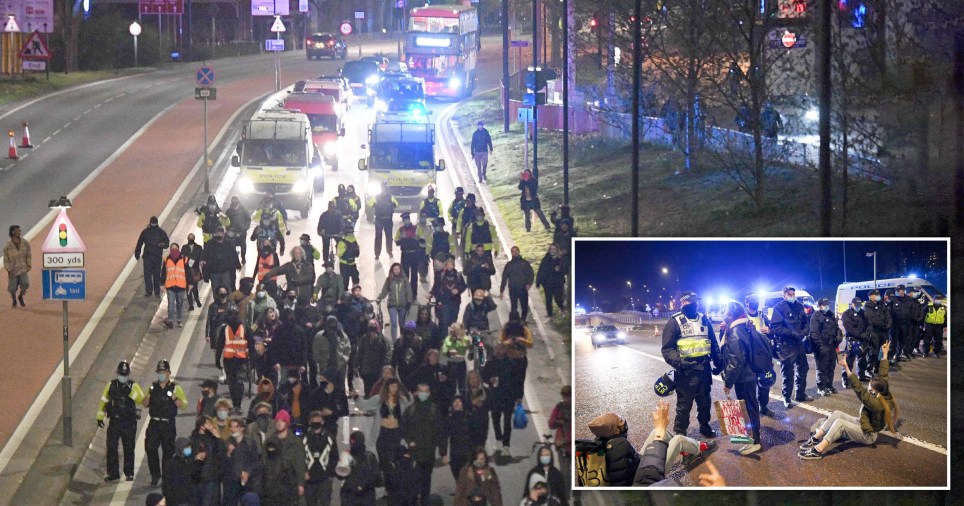 Around 100 demonstrators marched onto the motorway just outside Bristol tonight in opposition to the Government’s controversial new policing bill.

In a tweet Avon and Somerset Police said: ‘The group have marched onto the M32 and are currently sat on the carriageway.

‘The motorway has subsequently been closed to inbound traffic at Junction 3 in the interests of safety.’

Protesters who had been in Bristol city centre were heard chanting ‘block the motorway’ as they marched towards the M32, with police trailing behind them.

A standoff ensured as demonstrators sat down, blocking both the northbound and southbound carriages.

Music was playing from demonstrators speakers as officers set up a barricade to stop any more people joining them. 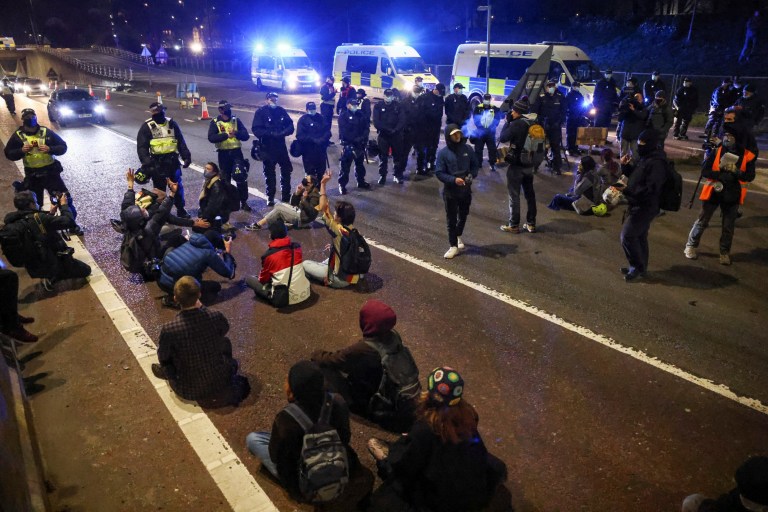 Music blared from speakers as demonstrators sat down on the M32 (Picture: Reuters) 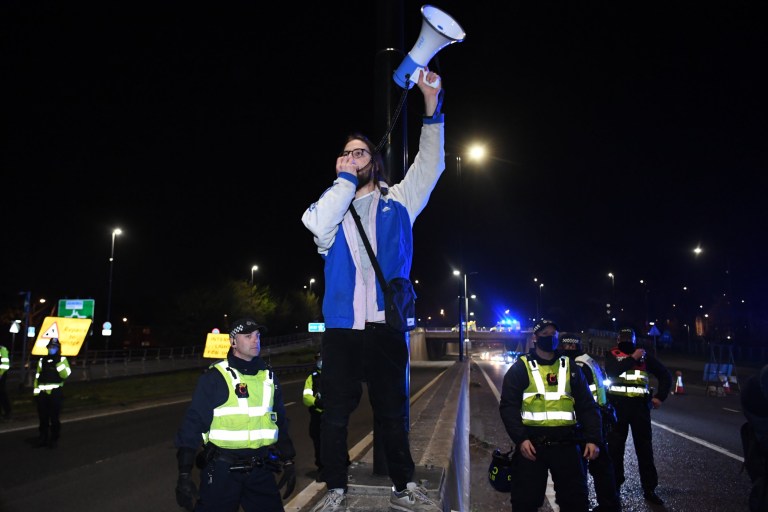 It comes as a ‘National Weekend of Action’ is held across the country (Picture: Getty Images Europe) 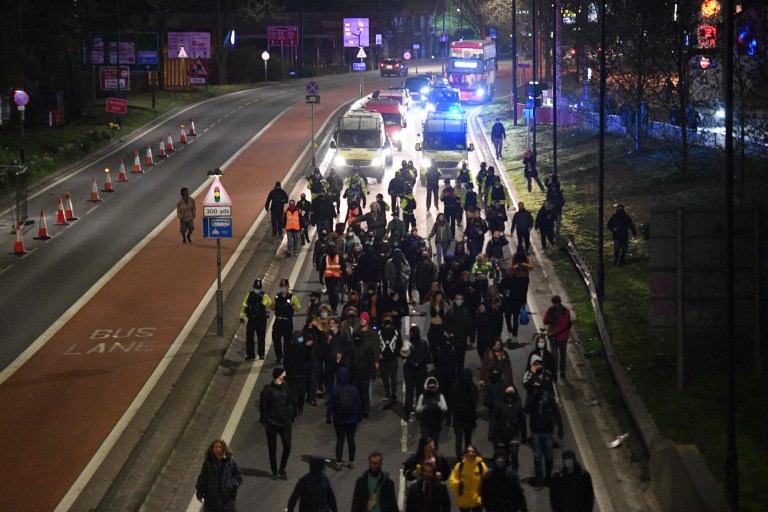 The group could be heard chanting ‘we are peaceful, what are you?’, seemingly to the police officers standing by.

It comes after a number of Kill the Bill protests in Bristol ended in violence late last month, with a police van set alight and the windows of a station smashed on March 31.

One demonstrator told Bristol Live that the protest was ‘very welcome to go into the early hours’.

However, after a debate among protesters, the group decided to move back into the city, after blocking the motorway for about 10 minutes.

It comes during a ‘Weekend of Action’ as rallies are held across the country in opposition to the Police, Crime, Sentencing and Courts Bill, which recently passed its second reading in Parliament. 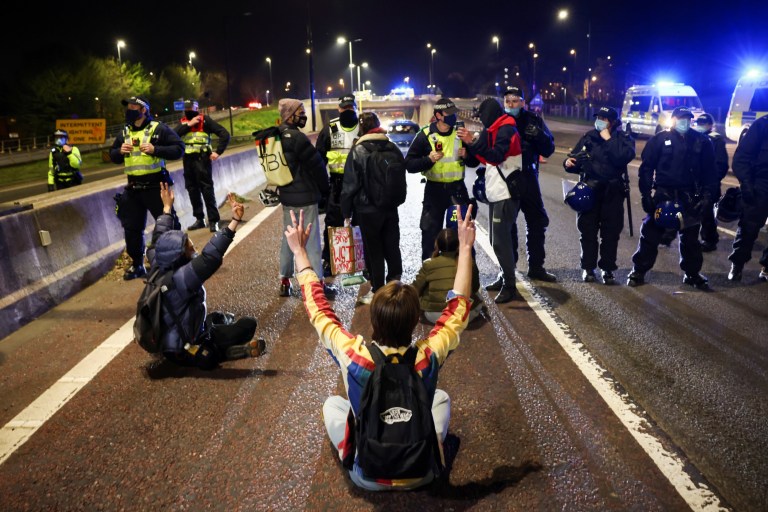 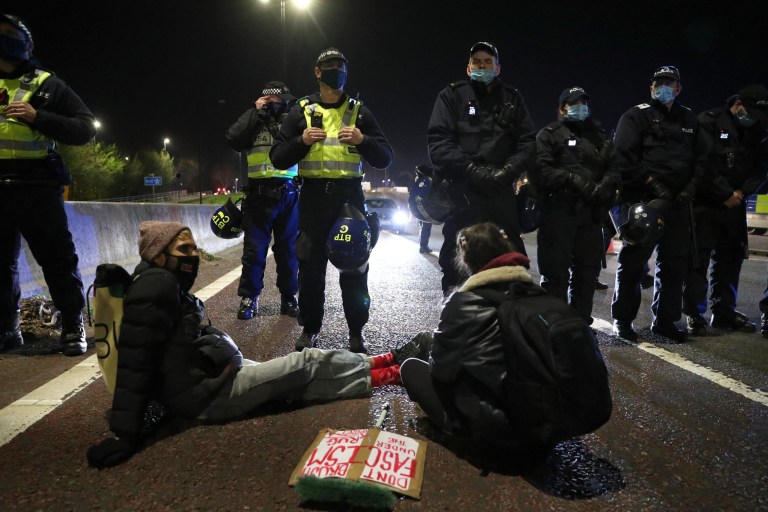 Demonstrators only blocked the motorway for around 10 minutes before deciding to head back into town (Picture: PA) 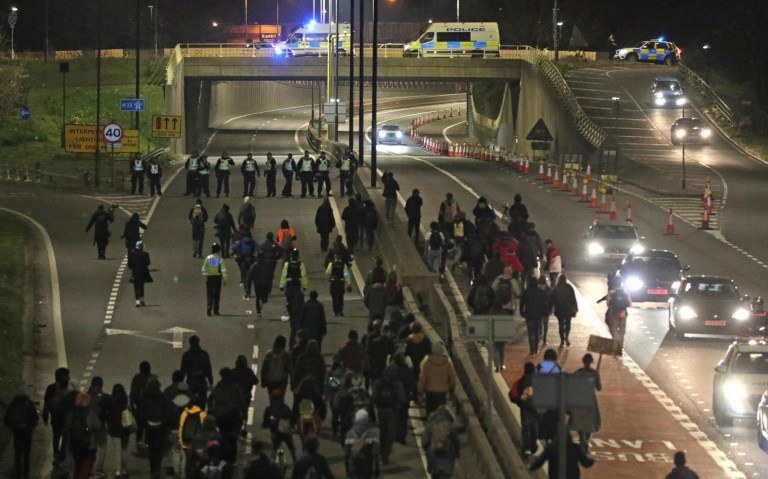 Police set up a barricade to stop anyone else joining the group (Picture: PA)

The proposed policing bill would make non-violent protests involving ‘intentionally reckless acts’ without a ‘reasonable excuse’ that cause ‘serious annoyance’ or are judged to be too ‘noisy’, punishable with a fine or up to 10 years in jail in theory.

It would be a crime to ‘intentionally or recklessly cause public nuisance’ that cause ‘intimidation or serious unease’ and ‘impact’ the community without a ‘reasonable excuse’.

The 307-page Bill also proposes to increase the maximum penalty for those who destroy or damage a memorial from three months to 10 years.

Police would also have the power to tell one-person protests to stop shouting and could impose noise limits and start and finish times on gatherings. 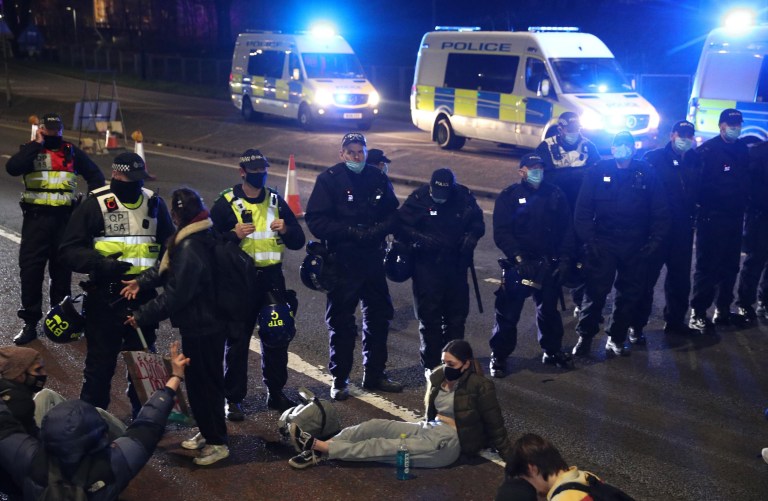 Demonstrators chanted ‘we are peaceful, what are you?’ to the police (Picture: PA) 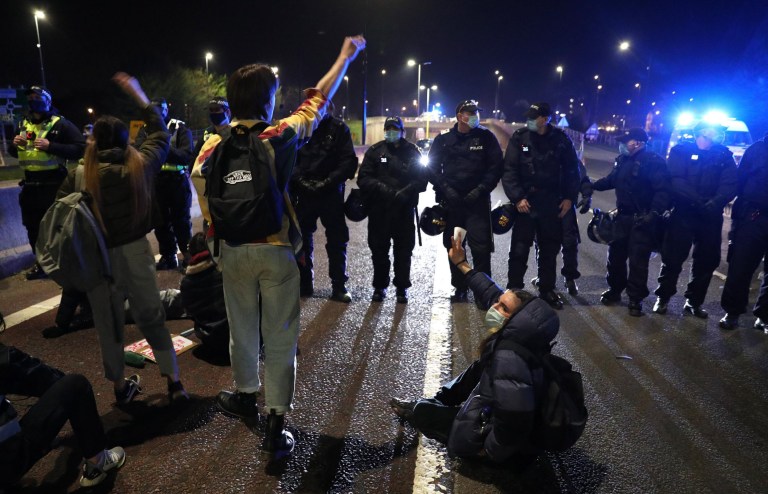 The proposed bill would make protests that cause ‘serious annoyance’ or that are judged to be too ‘noisy’ punishable with a fine or up to 10 years in jail (Picture: PA)

The ‘controlled area’ where protests are banned around Parliament would also be extended.

While the vast majority of today’s protests were peaceful, clashes broke out in central London today as projectiles were thrown and officers started pushing people.

At least 10 police officers were injured amid the chaos and 26 people were arrested for offences including assault on police and breach of the peace.

Dozens of extra officers were sent to help unblock a road for a McDonald’s lorry which was held up outside Parliament.