The ‘probability is strong’ that human remains found in Florida belong to Brian Laundrie, his family’s lawyer said (Pictures: Instagram/WTXL)

There is a ‘strong’ probability that the human remains uncovered in a Florida nature preserve on Wednesday belong to Brian Laundrie, the fugitive fiancé of Gabby Petito, his family’s lawyer has said.

The family is going to ‘wait for the forensic results to come in to verify that’, attorney Steven Bertolino told CNN’s Chris Cuomo.

Bertolino’s shocking revelation comes mere hours after the FBI shared that the remains were found near a backpack and notebook that belonged to Laundrie.

Cuomo asked the family’s attorney many of the questions swirling across the Internet regarding the involvement of Brian’s parents Chris and Roberta Laundrie – and their decision to finally aid the search, coincidentally on the day their son was likely found. 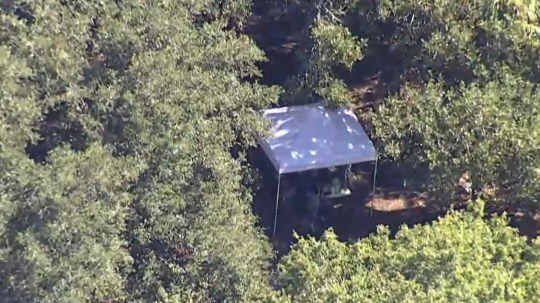 ‘The parents had assumed that the experts, the FBI, and all their tracking teams that they had would be able to locate Brian based upon the information we had provided them to the specific areas and trails in the park that he liked to visit,’ Bertolino said.

Bertolino told Cuomo the partial human remains were found in the very area of the park he and the Laundrie parents told law enforcement they believed Brian would be.

‘We initially informed law enforcement on, I believe it was September 17, that Brian would be most likely in the preserve in this particular area,’ he said.

That particular area, located a half-hour into the park, is near the bridge that connects the Myakkahatchee Creek Environmental Park and the neighboring Carlton Reserve.

Bertolino reiterated the FBI’s explanation given Wednesday that the area, remains and personal items of Laundrie’s had up until recently been under water.

‘Because it is so near the entrance, Chris and Roberta went to this area first, and as happenstance was, they stumbled upon these items,’ Bertolino said.

Much of the Internet has questioned how much of a happenstance it was to find the remains the one and only day the Laundrie parents joined the search for their son. But Bertolino was quick to try and squash those theories.

When asked what he makes of the theory that Chris planted the bag, Bertolino said: ‘In nice terms, it’s hogwash.’

He reiterated that law enforcement officials walked into the park and followed closely behind the Laundries. Members of the press also followed the family through the woods as the backpack was discovered, he said.

Cuomo later said it was understandable how people would be suspicious of the parent’s actions, to which Bertolino replied, ‘Absolutely’.

‘Now’s not the right time to talk about the situation with Gabby, but the family was following my directions,’ the family’s attorney said. ‘I told them not to talk to anybody.’

Tampa FBI Special Agent Michael McPherson said Wednesday that the FBI’s evidence team will be on scene using all available forensic resources to process the area, which will likely take several days.

‘I know you have a lot of questions, but we don’t have all the answers yet,’ McPherson said.

As the press conference ended and officials backed away without taking questions, onlookers chanted ‘Justice for Gabby!’

While Laundrie hasn’t been charged with anything related to his fiancé’s death, which was ruled to be by strangulation, the FBI issued a warrant for his arrest related to his unauthorized use of her bank card.

Laundrie has been the subject of a massive, FBI-led manhunt since he went missing and was named the prime person of interest in the murder of Gabby.

Her remains were found on September 19 in a remote area of a Wyoming park, where a coroner later determined she had left in the wilderness for three to four weeks.