SÃO PAULO—Brazilians cast their ballots Sunday in one of the most tense presidential elections in decades, with President

forecast in polls to lose to his predecessor,

in a vote that would consolidate a shift to the left in South America.

Mr. da Silva, a former president and longtime standard-bearer for the Latin American left who was jailed for corruption in 2018 and 2019, was expected to get at least 50% of the vote, according to Datafolha and Ipec polls late Saturday, enough to clinch a first-round victory.

Though 11 candidates are running for president in the world’s fourth-largest democracy, the vote has emerged as a deeply polarized battle between Mr. Bolsonaro, who has fewer than 40% support in most polls, and Mr. da Silva. If neither gets more than half of the votes, the election goes to a run-off vote on Oct. 30.

A victory by Mr. da Silva in Brazil, home to 215 million people, would mean that every major country in South America, from Argentina to Venezuela, would be led by a leftist government.

a former leftist guerrilla, won office in Colombia in June, and a former student-protest leader,

took office in Chile in March. If Mr. Bolsonaro loses, it would also be the first time since the early 1990s that an elected president in Brazil has failed to win a second term.

“Lula helped so many people when he was president before, people who were going hungry, people who didn’t even have access to clean water,” she said. “He has a good heart.”

Sunday’s vote comes after one of the most violent election seasons since the country emerged from a military dictatorship in 1985, with dozens of politicians killed this year and more than 140 others becoming victims of beatings, kidnappings and verbal attacks since July, according to the Observatory of Political and Electoral Violence at the Federal University of the State of Rio de Janeiro.

In the runup to Sunday’s vote, Mr. Bolsonaro, who served under the 1964-85 regime as an army captain, frequently criticized Brazil’s electronic voting system as open to tampering and accused the opposition of fraud, without presenting evidence. He has said he would only accept results if they are “clean.” His assertions have angered his supporters who say the vote is about to be stolen.

A supporter in São Paulo on Sunday embraced former Brazilian President Luiz Inácio Lula da Silva, who is seeking to return to office.


Celso Mizumoto, a 70-year-old agronomist and supporter of the president, said he is prepared to support a “movement” to keep Mr. Bolsonaro in power. “If people rise up against a situation that they believe is wrong, it’s a show of service to the country, not a coup,” Mr. Mizumoto said. “There are lots of people who support Mr. Bolsonaro who are convinced he will win.”

unsubstantiated allegations of election fraud in 2020, posted a message of endorsement from the Republican late Saturday. In a video clip, speaking from an airplane, Mr. Trump called Mr. Bolsonaro “a fantastic man, one of the great presidents of any country in the world.”

“He’s done an absolutely incredible job with your economy, with your country,” Mr. Trump said. “He’s respected by everybody throughout the world…he will be your leader for hopefully a long time.”

In Brazil, some of Mr. Bolsonaro’s most avid supporters have called for a return of military rule. As a result, the Supreme Court has taken an active role in cracking down on what it says are antidemocratic comments, drawing criticism for overstepping its judicial role.

In August, Brazilian police searched the homes of several prominent businessmen allied with Mr. Bolsonaro at the request of the Supreme Court, which said it was investigating the men for discussing a possible power grab in the event the conservative leader loses the vote.

Many of Mr. Bolsonaro’s supporters said they believe the recent opinion polls underestimate his popularity. Pollsters have struggled to calculate support for candidates, partly because of a lack of demographic data in the country after the national census was delayed because of the pandemic. They also said many voters reported they were afraid to express their political views. 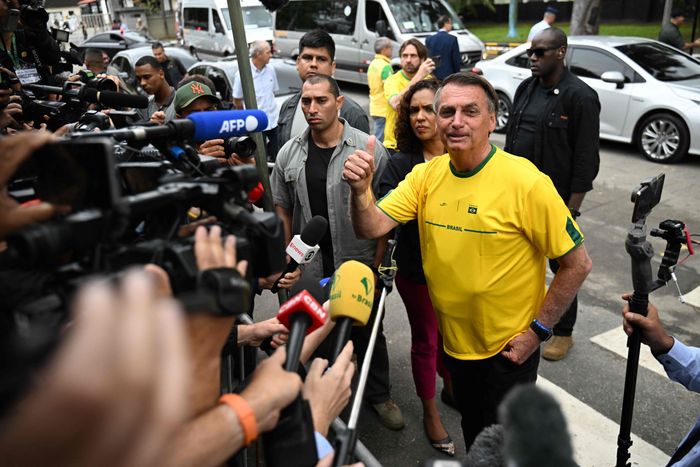 President Jair Bolsonaro has criticized Brazil’s electronic voting system as open to tampering and accused the opposition of fraud.

About two-thirds of voters in Brazil said they fear being attacked because of their political preferences, according to a Datafolha poll conducted in August.

Mr. Bolsonaro, 67, swept to victory in 2018 promising to bring order to Brazil. The country had recorded its deepest recession in history in 2016. Investigators had uncovered its biggest corruption scandal in 2014. And in 2017, Brazil notched the most homicides anywhere in the world.

But the Covid-19 pandemic upended Mr. Bolsonaro’s plans. After winning over the market with promises of fiscal responsibility, his government spent heavily on cash handouts during the worst of the pandemic, pushing Brazil’s debt up to 90% of gross domestic product. Meanwhile, double-digit inflation and unemployment that rose to close to 15% in June damaged his support among the poor.

Epidemiologists and researchers into public health have also blamed Mr. Bolsonaro for acting too late to curb the disease’s spread in Brazil, where it has killed close to 700,000 people—the world’s highest death toll from Covid-19, after the U.S. 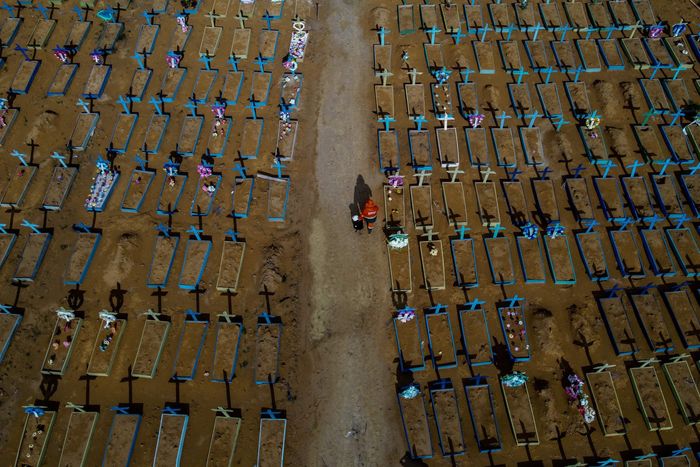 The graves of Covid-19 victims in Manaus, Brazil. The disease has killed nearly 700,000 people in Brazil, leading to criticism of Mr. Bolsonaro.

Among his major proposals, Mr. da Silva has vowed to tighten control over Brazil’s state-run companies—such as oil major Petróleo Brasileiro SA, or Petrobras—while raising the minimum wage and income tax among the rich. Mr. da Silva, whose Workers’ Party has allied with Cuba and Venezuela in the past, said “Brazil will be friends with everyone,” when questioned about foreign policy in August.

Mr. da Silva was convicted of corruption and jailed in April 2018 as part of the Car Wash corruption scandal centered on graft involving Petrobras contracts, but released in November 2019. The Supreme Court ruled that he should be allowed to appeal his case out of jail, later deciding that the judge on his case, Sergio Moro, acted impartially by passing tips to prosecutors on possible witnesses. The case that landed Mr. da Silva in jail was never retried and the statute of limitations has now expired.

Luiz Felipe Alves, 40, a musician from São Paulo’s affluent Vila Madalena neighborhood, said he is troubled by Mr. da Silva’s conviction. But Mr. Alves said he was unhappy with Mr. Bolsonaro’s management of the pandemic, adding that Brazil needs change.

“Lula also has charisma, and he engages with the world,” said Mr. Alves.

Mr. da Silva, who was diagnosed with throat cancer 10 years ago but has since recovered, lost his wife from a stroke shortly before he was jailed. The former trade unionist has since remarried. He has also posted videos of himself working out, in what political scientists say is an attempt to show he is still up to the job of running Latin America’s biggest country.