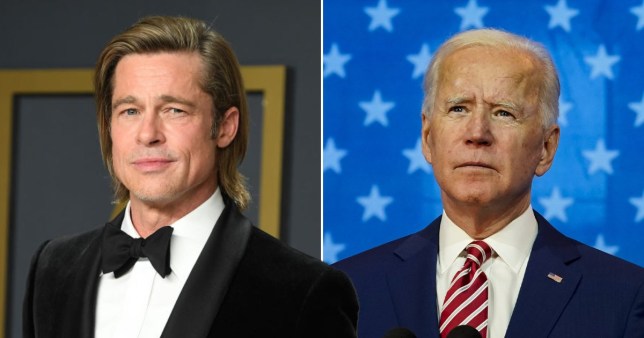 Brad Pitt gets political as he backs Joe Biden for President (Picture: Getty)

Brad Pitt is the latest star to throw his support behind Democratic candidate Joe Biden in a new campaign advert for the Presidential hopeful.

In the commercial, Biden is seen with his wife, Dr Jill Biden, on stage as well and also meeting with supporters.

Brad is heard saying: ‘America is a place for everyone. Those who chose this country. Those who fought for it. Some Republicans. Some Democrats. And most, just somewhere in between.

‘All looking for the same thing: Someone who understands their hopes, their dreams, their pain. To listen, to bring people together, to get up every day and work to make life better for families like yours.’

He concludes: ‘To look you in the eye, treat you with respect, and tell you the truth.  To work just as hard to work for the people who voted for him, as the people who didn’t. To be a president for all Americans.’

Just last week, Brad’s ex-wife Jennifer Aniston also revealed she was voting for Joe Biden and his running mate Kamala Harris, citing race, the pandemic and LGBT rights as among the key issues.

The Friends actress wore a mask to post her ballot in West Hollywood, sharing a picture of the moment to Instagram.

Explaining her support for Mr Biden and Ms Harris, The Morning Show actress wrote: ‘I voted for them because right now this country is more divided than ever. Right now, a few men in power are deciding what women can and can’t do with their own bodies. Our current president has decided that racism is a non-issue.

‘He has repeatedly and publicly ignored science… too many people have died. I urge you to really consider who is going to be most affected by this election if we stay on the track we’re on right now…

She continued: ‘your daughters, the LGBTQ+ community, our Black brothers and sisters, the elderly with health conditions, and your future kids and grandkids (who will be tasked with saving a planet that our leadership refuses to believe is hurting).’

Aniston, best known for playing Rachel Green on Friends, said the election is not about a single issue or candidate, but ‘the future of this country and of the world’.⠀

The 51-year-old said: ‘Vote for equal human rights, for love, and for decency.’

The presidential election is taking place on November 3.⠀

Top Contenders for Biden’s Cabinet Draw Fire From All Sides

One dead after shooting at Sacramento mall on Black Friday