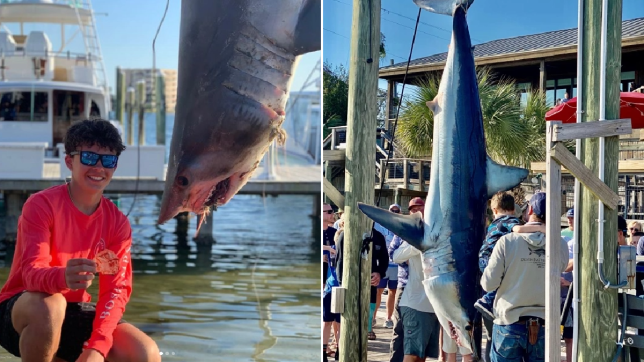 Thomas Thompson caught a 450-pound Mako shark while fishing on Monday – then took it home to eat for dinner (Pictures: Thomas Thompson)

A 16 year-old boy caught a 450-pound Mako shark during a fishing trip – then brought it home to eat for dinner. Thomas Thompson landed the impressive catch in Destin, Florida, on Monday after spotting the apex predator in the water devouring a tarpon.

Thomas says the shark spent half an hour circling his family’s boat while displaying its food. He decided to try and catch it, and after a few casts got the shark on his line. Thomas said: ‘We thought it would be scared or something, it was weird. It was just trying to show off to us.

‘It was a really cool sight to see something I’ve never experience before and about 30 minutes in we decided we’d try and catch it.’ Thomas says he spent an hour trying to land the shark after catching it, with another boat then coming to help, and the shark finally caught 90 minutes later.

Thomas said: ‘I fought it for about an hour, and that is when we knew it was the real deal, we were in for a long fight. It was pretty crazy, we definitely were not expected that.’ 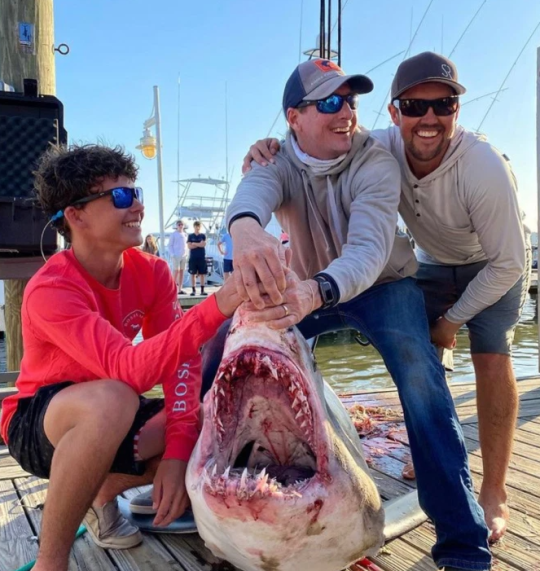 Thomas and his fellow fishermen decided not to let the shark go over fears for the local tarpon population, and because it could be turned into 200 meals (Picture: Thomas Thompson)

He shared a video of the catch on his Instagram page, and joked ‘Might need a bigger boat after this one,’ a reference to shark horror film Jaws.

Thomas and the other fishermen decided not to free the shark over worries its size could pose a threat to the local tarpon population, WKRG reported. They vowed not to waste the shark, whose meat – which has been likened to swordfish – will feed about 200 people.

The shark was found with part of the tarpon it had been eating in its stomach, with Thomas keeping a tarpon tooth found inside it as an additional souvenir.

Having bagged the huge catch, Thomas hopes to land an even bigger marlin next. Mako sharks are classified as endangered, although fishermen and women in Florida are allowed to catch them.

The sharks normally feed on other fish, sea birds and turtles and have been known to attack humans if stressed or provoked.