WASHINGTON—The top U.S. envoy to Afghanistan proposed the idea of a grand conference of Afghan and Taliban leaders to create an interim government, U.S. and Afghan officials said, reflecting a growing consensus in the Biden administration that peace talks between representatives of the two sides in Doha are moving too slowly.

The idea, suggested during a visit to the region this week by Zalmay Khalilzad, the top U.S. envoy for Afghan peace, would replicate the format of the 2001 conference held in Bonn, Germany, which selected a leader for Afghanistan after the Taliban were ousted following the Sept. 11 attacks.

A key difference: The Taliban weren’t invited to join the first talks. If they were to agree to participate now, they would take a seat at the table with more influence than at any time in the past 20 years of war.

The new effort would likely set aside a deal negotiated between the Trump administration and the Taliban. It would also likely delay a U.S. troop withdrawal by May that was part of the deal.

agreed last year to withdraw all troops within a period of 14 months in return for a Taliban promise to ensure that terrorist groups never again use Afghanistan as a haven to plot attacks against the U.S. and its allies. The 14-month period expires on May 1.

In the year since the U.S. signed the deal, the United Nations has documented rising violence at the hands of the Taliban and found that the insurgents continue to maintain close ties to al Qaeda.

The insurgents now control much of the countryside and are encroaching on major Afghan towns. Residents and security forces in Afghan cities have observed with consternation the Taliban forces building up in the surrounding areas, poised to attack if peace talks fall through.

A Taliban spokesman said, when asked about Mr. Khalilzad’s offer: “The Afghan people have tried temporary, transitional and participatory systems for 40 years. Unfortunately, they have not solved the problems of the country and the people.”

“It is necessary to focus on solving problems, not on formalities,” the spokesman said.

Another option floated by Mr. Khalilzad during his trip to Kabul this week, U.S. and Afghan officials said, was bringing in a mediator to help accelerate the peace process between Afghan and Taliban officials in Qatar. But the larger conference has been presented as the most “desirable” outcome, one of these officials said.

U.S. officials hope that a second “Bonn conference,” with international observers present, would force both parties to work together more rapidly and potentially open up the prospect of negotiations with the interim government to keep a residual force of U.S. troops in Afghanistan after the May deadline.

Top North Atlantic Treaty Organization and U.S. military leaders have signaled that they don’t believe the Taliban have done enough to meet their part of the agreement and allow forces to leave. But the conditions imposed on the Taliban are hazy; the deal doesn’t explicitly require the Taliban to commit to reducing violence against Afghan forces, or even formally break ties with al Qaeda.

The Biden administration hasn’t decided to renege on U.S. commitments to withdraw U.S. forces. NATO allies have told the U.S. their military footprint in Afghanistan hinges on U.S. plans, defense officials said. Of the 9,000 troops in Afghanistan, roughly 2,500 are U.S. forces, marking the first time NATO partners have the largest presence.

“This report does not accurately capture the state of play. The United States is not making any formal proposals and is continuing to review all relevant options for future force posture—and all means all,’’ the White House said in a statement. “Ambassador Khalilzad has discussed a range of ways to move the diplomacy forward, nothing more.” 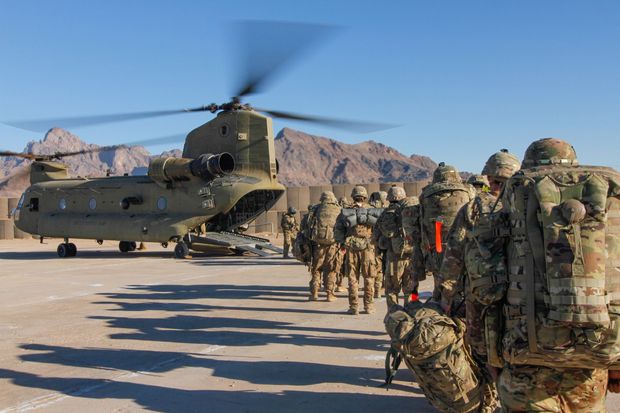 
Top U.S. military commanders have presented several options to the Biden administration that spell out the consequences either of a full withdrawal, trying to negotiate a new deal with the Taliban, or staying indefinitely, defense officials said. Military commanders have said they believe a full withdrawal could lead to the collapse of the U.S.-backed government in Kabul, a resurgence of violence and a Taliban that can’t adequately stop the rise of other extremist groups, like Islamic State.

Military officials haven’t spelled out a timeline for ending the war should the coalition choose to stay past May 1, or how they would persuade the Taliban to enter another deal should this one collapse.

Some defense officials have said they fear that if the U.S. keeps troops in Afghanistan past May 1, the Taliban will retaliate by attacking U.S. and coalition forces, as it already has threatened to do, and attempt to seize major Afghan cities. Other defense officials have proposed that U.S. and coalition forces stay, in part, to serve as leverage during slow-moving talks.

The Taliban in a statement earlier this month said that if the deal “is abrogated, it would lead to a major war, the responsibility of which shall fall squarely on the shoulders of America.”

The State Department declined to comment on the specifics of the latest proposal, while saying there is agreement on “the need to move more quickly.” Mr. Khalilzad, who was born and raised in Afghanistan, previously worked for the Trump, Obama and

administrations, and has served as U.S. ambassador to Afghanistan and Iraq.

Laurel Miller, who served as acting top envoy to Afghanistan under the Obama and Trump administrations, said it was difficult to envision how power could be parceled out among the various parties in a way that would be acceptable to all under the U.S. proposal.

“An interim power-sharing arrangement that satisfied the Taliban’s demand for an Islamic government would come at a high price, so high it would mean handing them the key,” said Ms. Miller, now the director of the International Crisis Group’s Asia Program. “It was difficult at Bonn 1, and that’s when the participants were all on the same side.”

She added that the Doha process had some prospect of delivering stability if it succeeded, while an interim government cobbled together before differences were hashed out would be prone to collapse.

said at his first Pentagon briefing last month the U.S. wouldn’t undertake a hasty or disorderly withdrawal that puts forces or NATO’s reputation at risk.

“Clearly, the violence is too high right now, and more progress needs to be made in the Afghan-led negotiations, and so I urge all parties to choose the path towards peace. The violence must decrease now,” he said.

Write to Jessica Donati at jessica.donati@wsj.com and Nancy A. Youssef at nancy.youssef@wsj.com