ST. IVES, England—World leaders gathered in southwestern England for a summit of the Group of Seven leading economies, where wealthy countries planned to collectively donate one billion Covid-19 vaccine doses to poorer nations and President

hoped to marshal the world’s democracies against authoritarian states.

Mr. Biden, on his first international trip as president, met with the leaders of Canada, France, Germany, Italy, Japan and the U.K. under a leaden sky on a beach in Cornwall.

The first face-to-face gathering of the G-7 since the start of the Covid-19 pandemic is set to be dominated by how the club of rich nations can pool resources to help stem the virus’s spread in developing economies and reaffirm the soft power of democratic nations in the process.

World leaders on Friday posed for a portrait at the G-7 summit.


“This is a meeting that genuinely needs to happen,” British Prime Minister

told the leaders as they gathered around a table to discuss how to build back from the pandemic. “We need to make sure we don’t repeat some of the errors we doubtless made,” he added.

will participate via video link because of the Covid-19 pandemic raging through his country.

and one of the last for German Chancellor

The Covid-19 crisis gives the meeting an obvious focal point. The leaders can “appear as superheroes to save the world,” says Robert Yates, a project director at think tank Chatham House. “This time they’ve got a chance to actually do something.”

Since taking office, President Biden has pushed to expand the U.S.’s global influence in everything from climate change to defense. WSJ looks at how he could leverage ties with world leaders to help his foreign policy agenda during his first trip overseas. Photo: Phil Noble/Associated Press

The governments see the three-day summit as an opportunity to rebuild relations among friendly states that were bruised during the Trump administration and to better confront the growing international assertiveness of China, Russia and other authoritarian states. The G-7, however, makes up a shrinking share of the world economy: When it emerged in 1975, its members made up 70% of the global economy. Now, they account for just 40%.

“I’m looking forward to reinforcing our commitment to multilateralism and working with our allies and partners to build a more fair and inclusive global economy,” Mr. Biden tweeted ahead of the meeting.

On Friday, the leaders posed for a joint photo on a beach, before participating in a meeting about global efforts to recover from the pandemic. They will gather in the evening with members of the British royal family at the Eden Project, an ecological visitor attraction.

Today’s headlines, news in context, and good reads you may have missed, with Tyler Blint-Welsh.

“We need to make sure that we now allow our economies to recover and I think they have potential to bounce back very strongly,” Mr. Johnson said at the beginning of the G-7 session on recovering from the pandemic.

“We’re building back better together,” he added

The prime minister then asked the media to leave so the leaders could speak, saying the event was supposed to be a “fireside chat” but has turned into a “gigantic media circus.”

Over the three days, the leaders will discuss environmental and climate issues, economic resilience, foreign policy and health. They will also push efforts to expand the number of Covid-19 vaccines available to poor countries.

Mr. Johnson’s office said Thursday that the U.K. would donate 100 million surplus vaccine doses to the rest of the world within the next year, part of a broader push to donate one billion doses to countries that have struggled to vaccinate their populations. Mr. Biden previously announced that the U.S. would donate 500 million shots developed by

Mr. Biden and the other leaders also were expected to back the global minimum tax proposal their finance ministers supported last week. The idea is to set a floor—at least 15%, though the U.S. would go higher—on corporate taxes that would limit the benefits companies could get from using low-tax jurisdictions.

The agreement among wealthier countries that already have higher tax rates faces obstacles as the G-7 nations try to sell it around the world. And implementing and policing it will be difficult.

What would you like to see come out of the G-7 summit? Join the conversation below.

The tax agreement is central to Mr. Biden’s domestic agenda. The more Mr. Biden can get other countries to raise their tax rates, the more the U.S. can raise taxes on U.S.-based companies’ foreign earnings without making maintaining a U.S. headquarters too much of a disadvantage.

Mr. Biden has proposed raising corporate taxes and using the money to pay for his infrastructure plan though it could also be used for his family-spending plan as Democrats balk at other tax increases.

said in a statement.

The two leaders will discuss the global response to the pandemic, climate change, the economy and international security, Ms. Psaki said.

After leaving the U.K., Mr. Biden will later meet with Russian President

When asked Friday what his message to Mr. Putin would be, Mr. Biden responded: “I’ll tell you after I deliver it.” 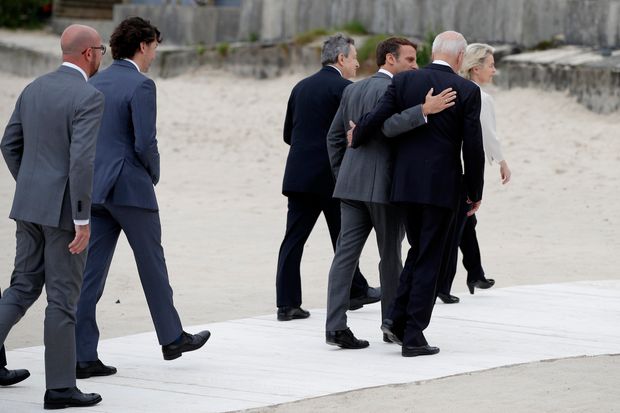 More coverage of the president’s trip, selected by the editors.

Write to Andrew Restuccia at andrew.restuccia@wsj.com and Max Colchester at max.colchester@wsj.com

From Kramer Vs Kramer to Piku, a look at 10 movies that celebrate fatherhood-World News , Firstpost

Curbs to be lifted from 20 June; schools, colleges to reopen from 1 July