FESTIVE sarnies are here – and we’ve tasted them to find the best and worst.

Luckily supermarkets and high street coffee chains are still allowed to sell sandwiches to take away. 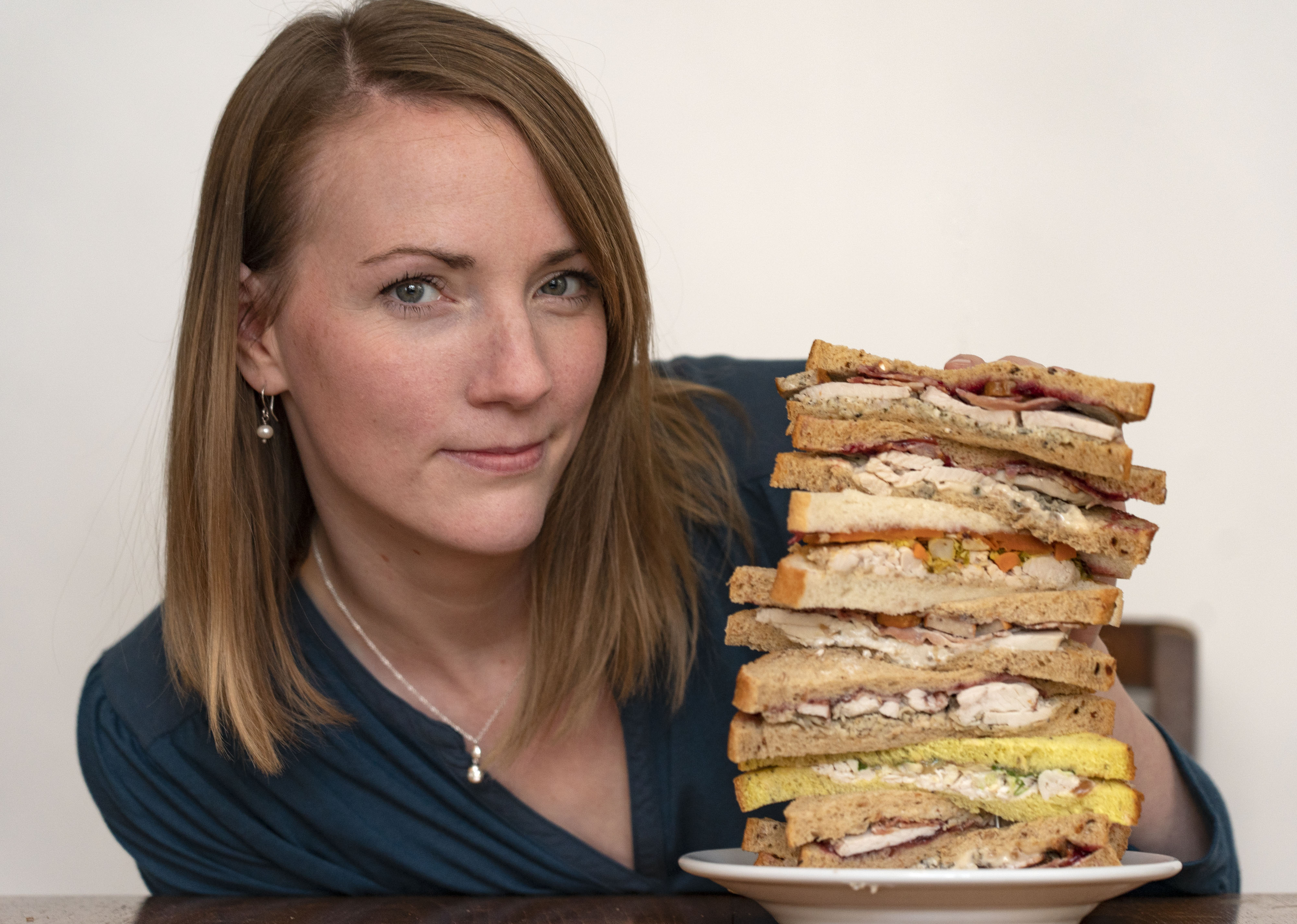 And to take the stress out of deciding which one to choose, we’ve tested them all for you.

We tried the turkey feast sandwiches sold by nine different major outlets and gave them an overall score out of 15, with five points each for appearance, taste and value for money.

Top marks went to M&S’s Turkey Feast Sandwich, which was packed with traditional Christmas flavour and scored an impressive 14 out of 15.

It was closely followed by Pret’s Christmas Lunch, with 13 points.

It was a hit thanks to its festive port and orange cranberry sauce and crispy onions, but lost points because it was bulked out with spinach leaves.

The selection of supermarket sandwiches in our taste test have traditional turkeyCredit: Chris Eades

At the bottom of the pile was Costa’s British Turkey & the Trimmings toastie, only scoring seven points due to its disappointing lack of filling, greasy feel and expensive £3.50 price tag.

Also close to bottom was Tesco, its £2.75 sandwich scored poorly on taste, appearance and value, getting only eight points.

Some popular outlets, such as Greggs, aren’t selling traditional turkey sandwiches this year so they weren’t included in our test.

Here’s our full verdict on which Christmas sandwiches will bring you festive cheer – and which will make you feel like a humbug: 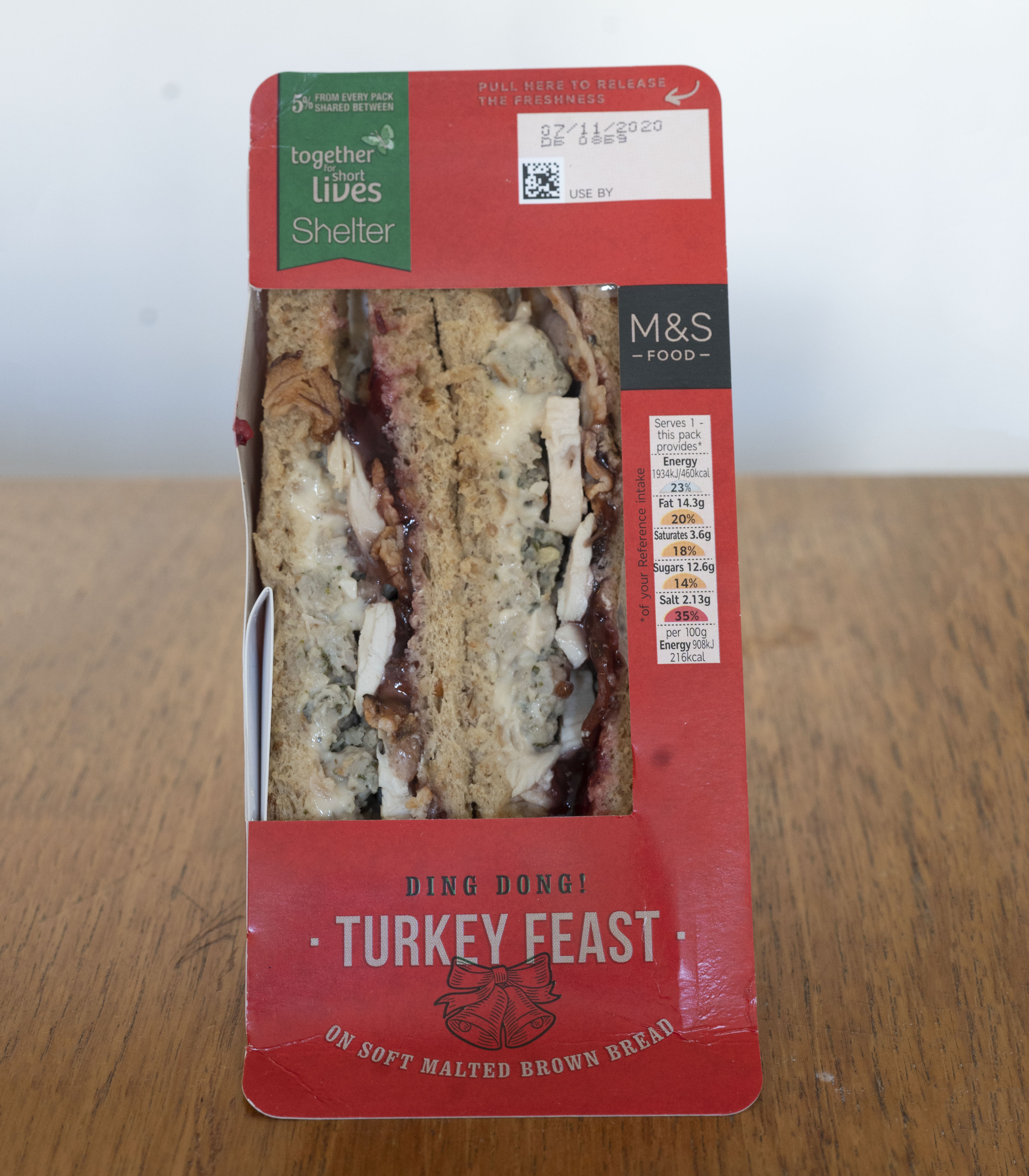 M&S is top for its turkey feastCredit: Chris Eades 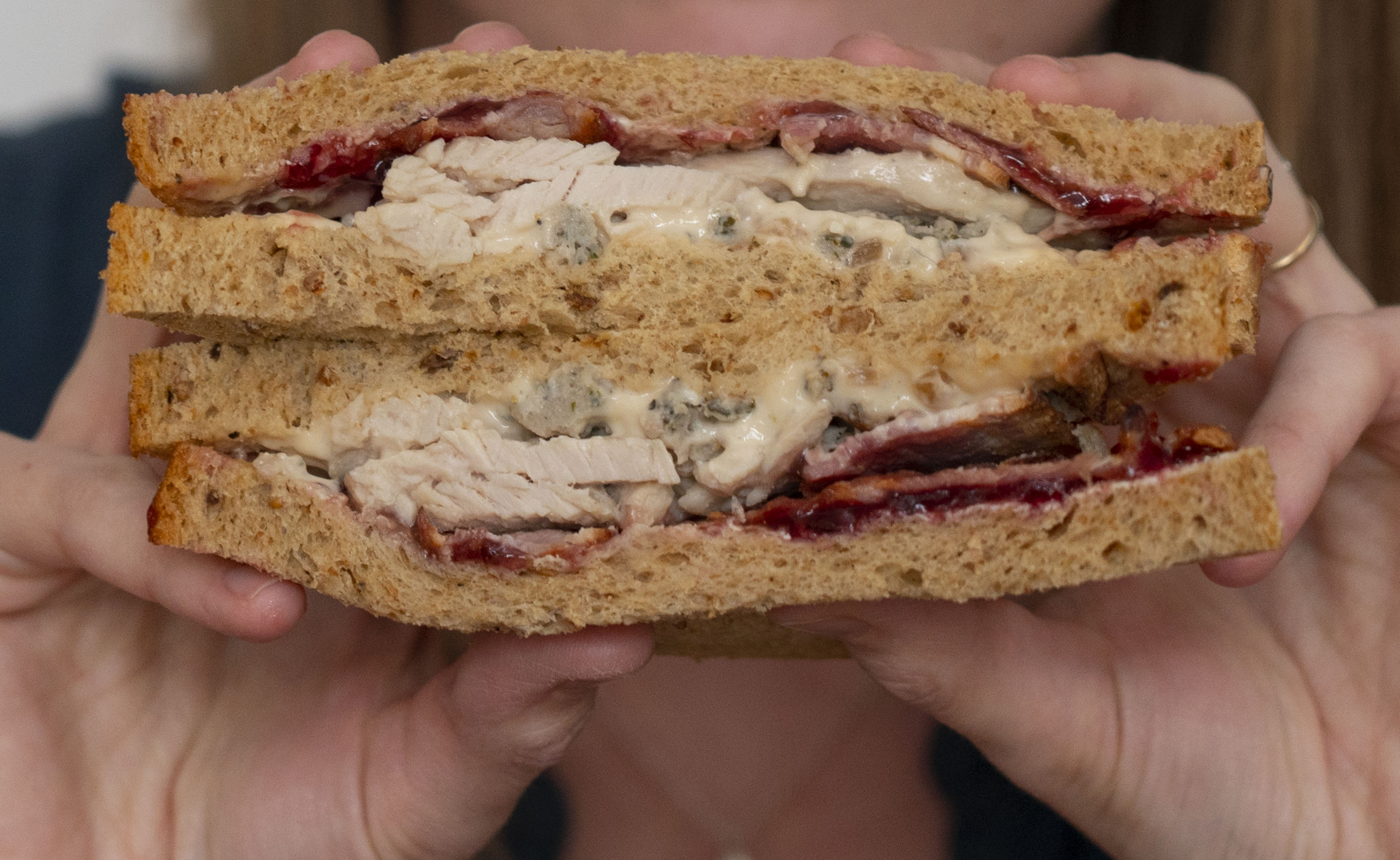 The Christmas sandwich was packed with moist turkeyCredit: Chris Eades

This year’s winner tasted just like a traditional Christmas dinner and was full of moist turkey, herby stuffing, smoky bacon and lots of cranberry sauce.

It scored an impressive 14 out of 15, only losing one mark for value for money as it is on the pricier side at £3.30. 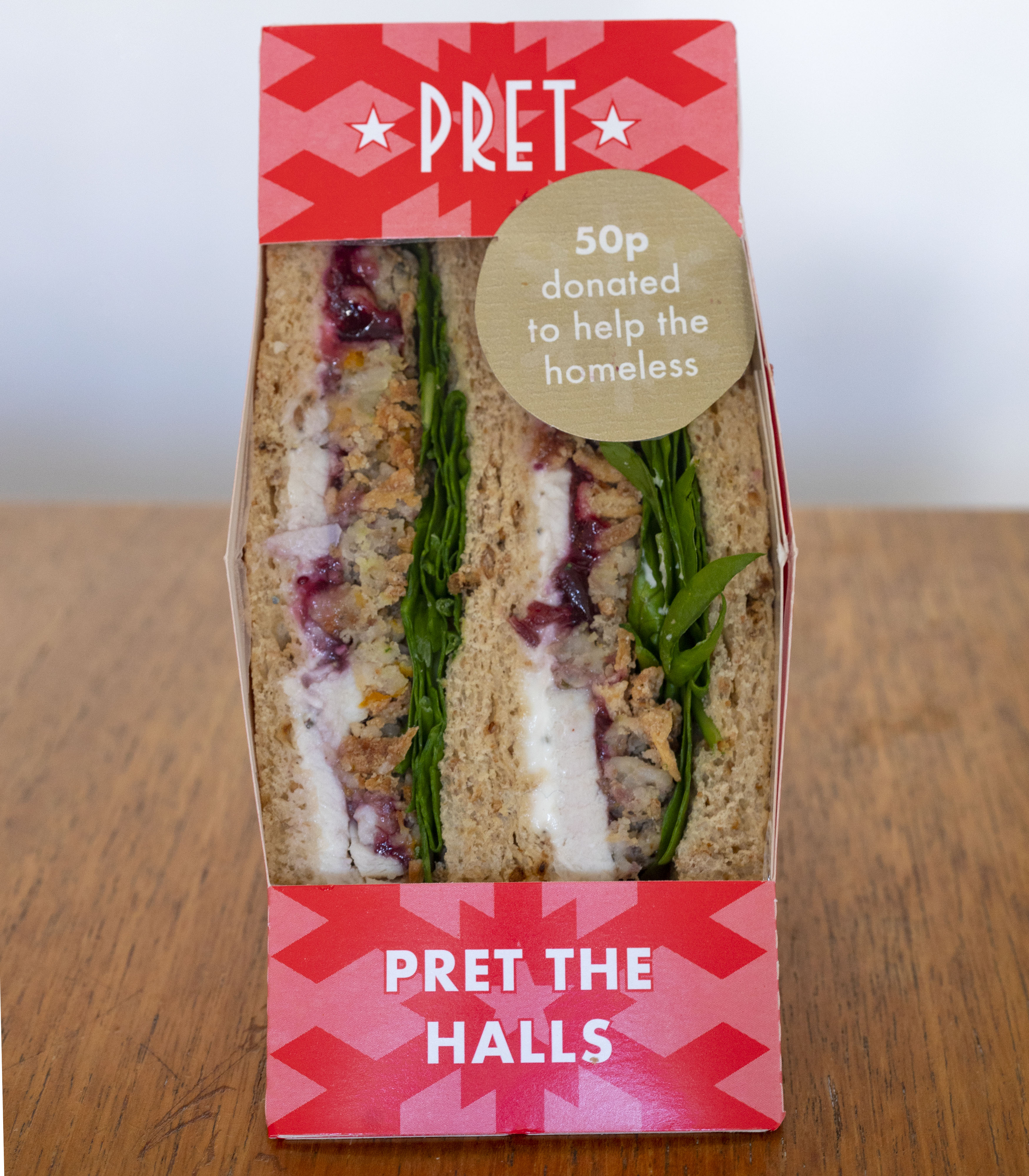 Pret lost points for stuffing the sandwich with too much spinachCredit: Chris Eades

Close second was Pret’s sandwich which was full of festive flavour thanks to its port and orange cranberry sauce.

The addition of crispy onions added welcome extra crunch but the sandwich lost a point on taste because it was bulked out with lots of not-very-Christmassy baby spinach leaves.

Although it was the most expensive sandwich we tried, it only lost one point on value as 50p of the price goes directly to homeless charities. 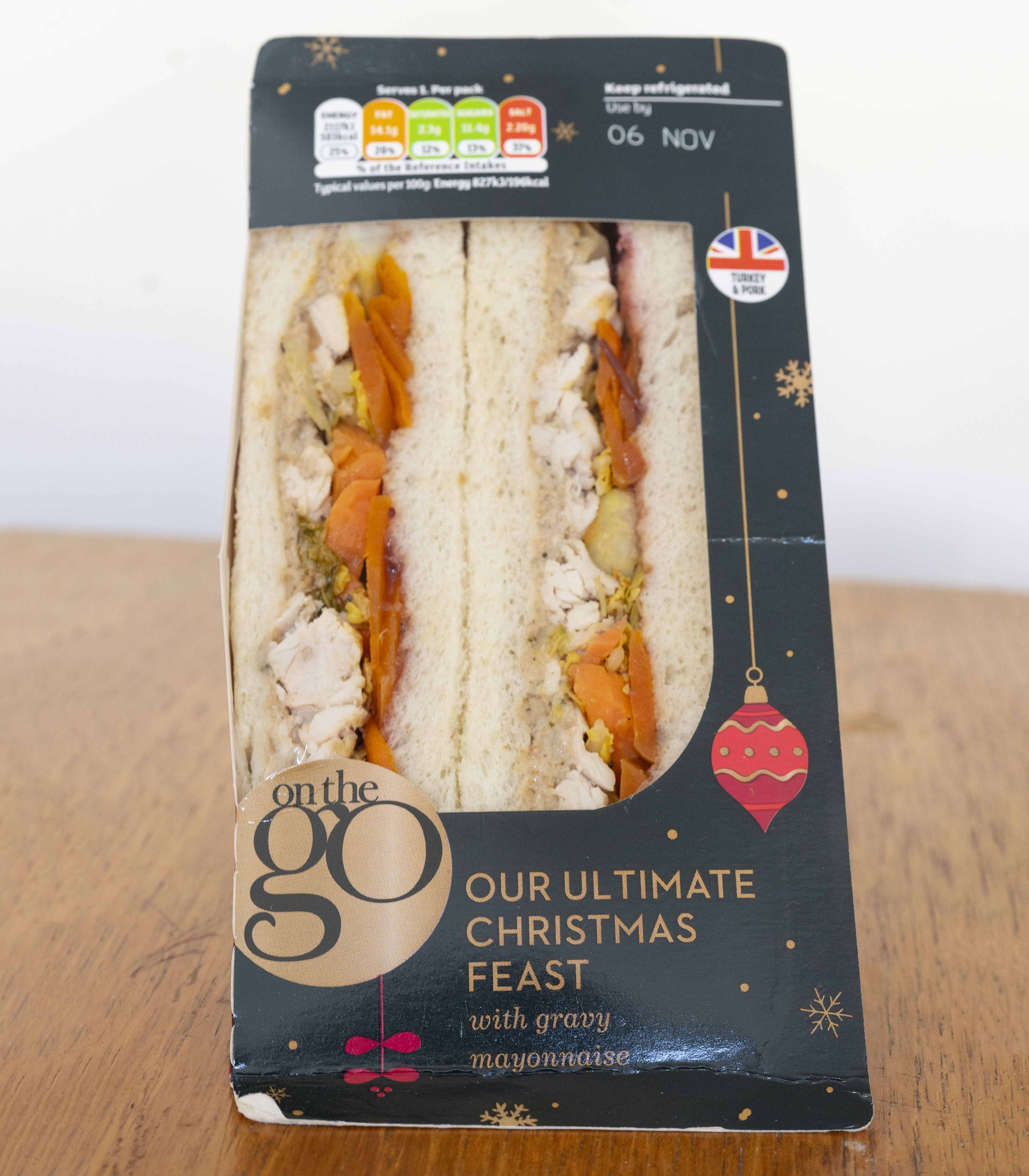 Sainsbury’s was the only brand to offer a sandwich that looks like an actual roast turkey dinner.

As well as classic turkey, it was packed full of traditional Christmas veg like cabbage, brussels sprouts, carrot and butternut squash, complete with a gravy mayonnaise and cranberry chutney.

It looked amazing and you get a lot of filling for your money but unfortunately all that veg meant it tasted quite bland. 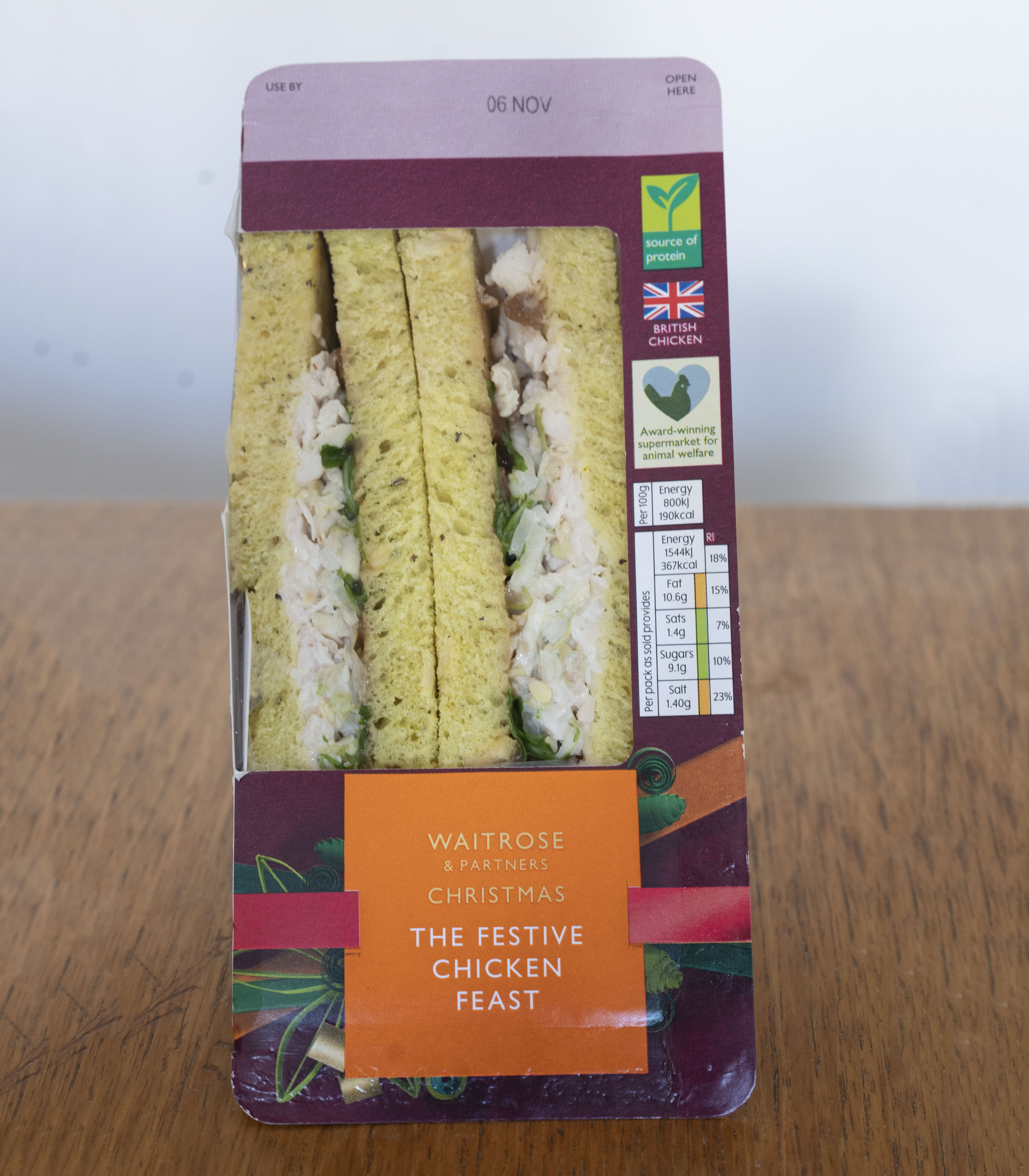 Waitrose was not festive enough with its flavoursCredit: Chris Eades

This Christmas sandwich contains chicken instead of turkey.

We’d be willing to forgive that but the rest of the flavours aren’t very Christmassy either – in fact it tasted more like a curried chicken and vegetable sandwich.

The parsnip-flavoured bread was lovely and soft and there was lots of moist filling, but the sandwich lost marks for not being festive enough. 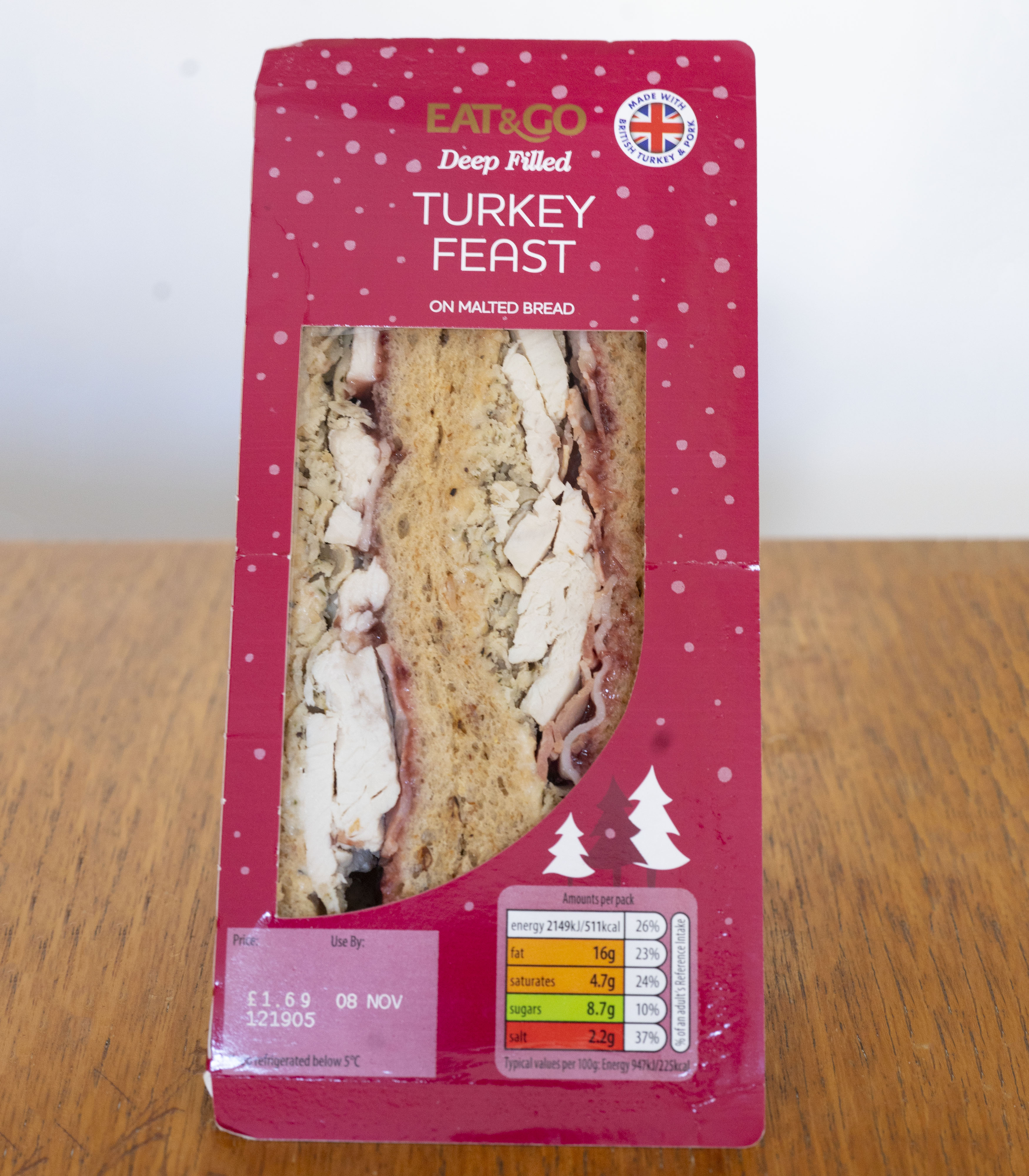 This sandwich looked like it was packed full of meat but when we opened it up there was only really filling in the middle.

Although its sage stuffing tasted fairly Christmassy and it was the cheapest sandwich on the high street at just £1.69, it wasn’t actually great value as there was so little filling inside. 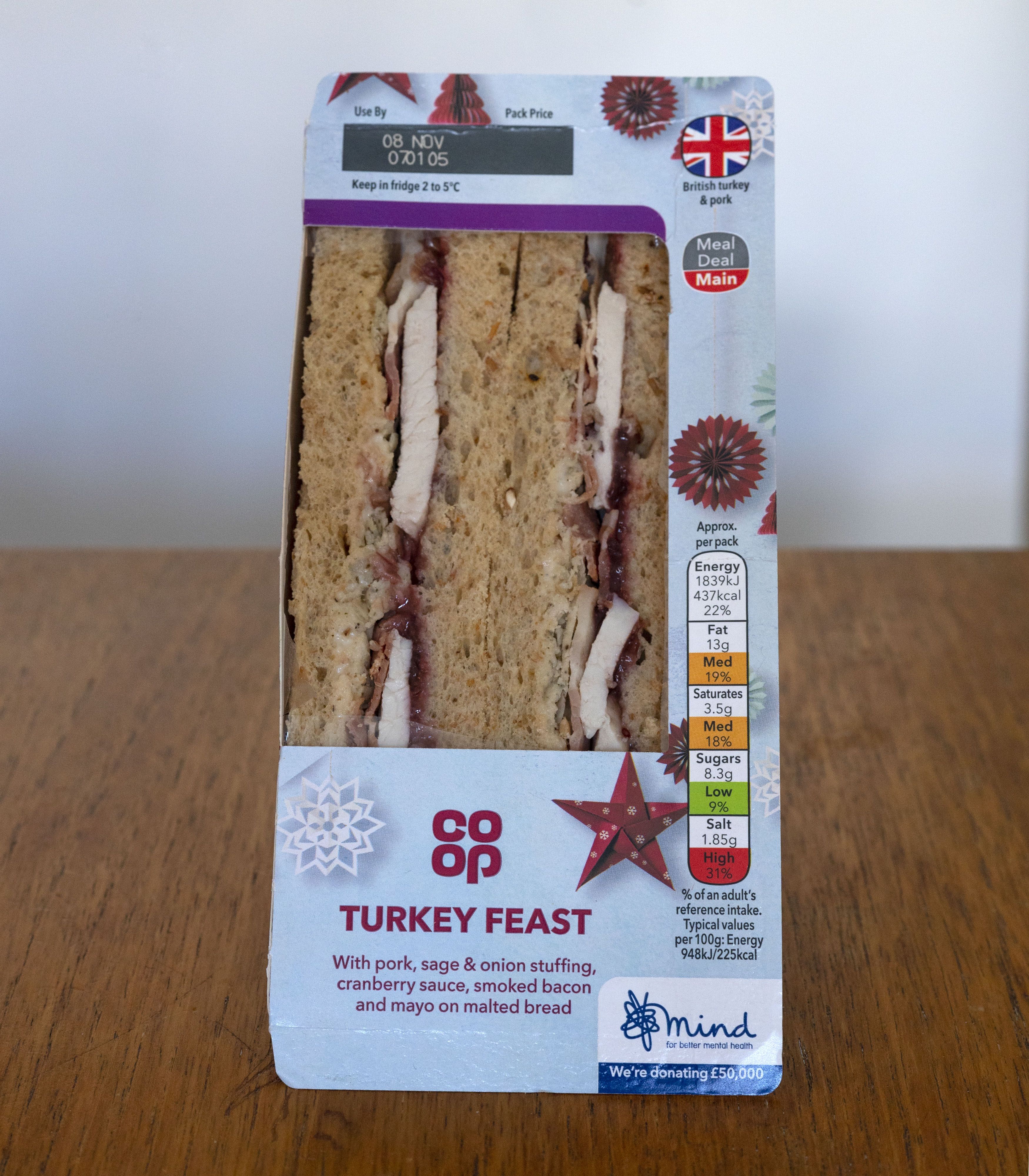 This one looked limp and like it lacked filling so lost points on appearance but it was actually surprisingly tasty and contained a decent amount of turkey, bacon and cranberry sauce. 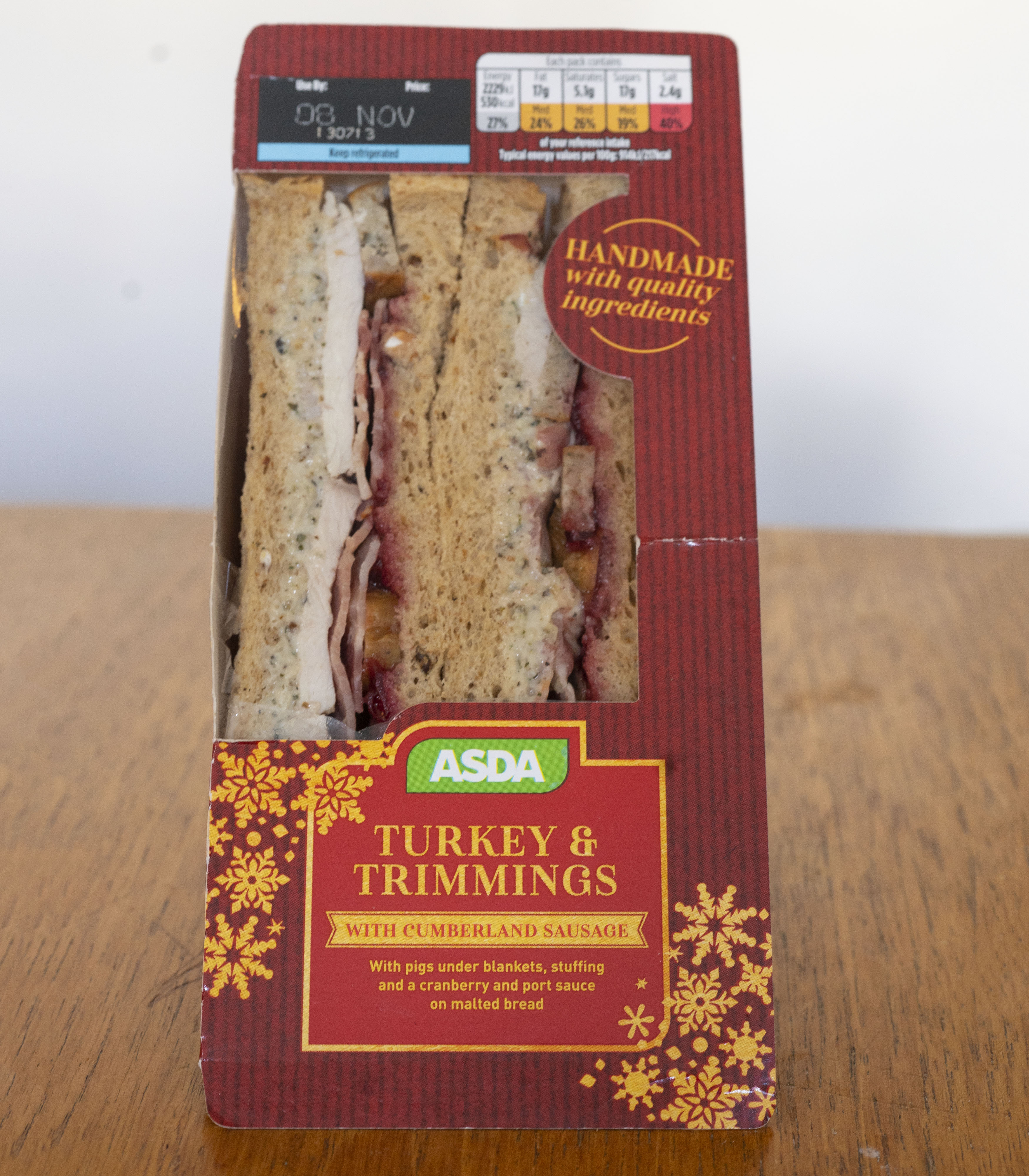 The Asda sandwich was the second cheapest we tried but it was lacking in filling.

In fact, one of the sandwiches in our pack had almost no turkey in at all.

It did have a Christmassy taste from the herby stuffing and cranberry sauce but if you want guaranteed turkey, give this one a miss. 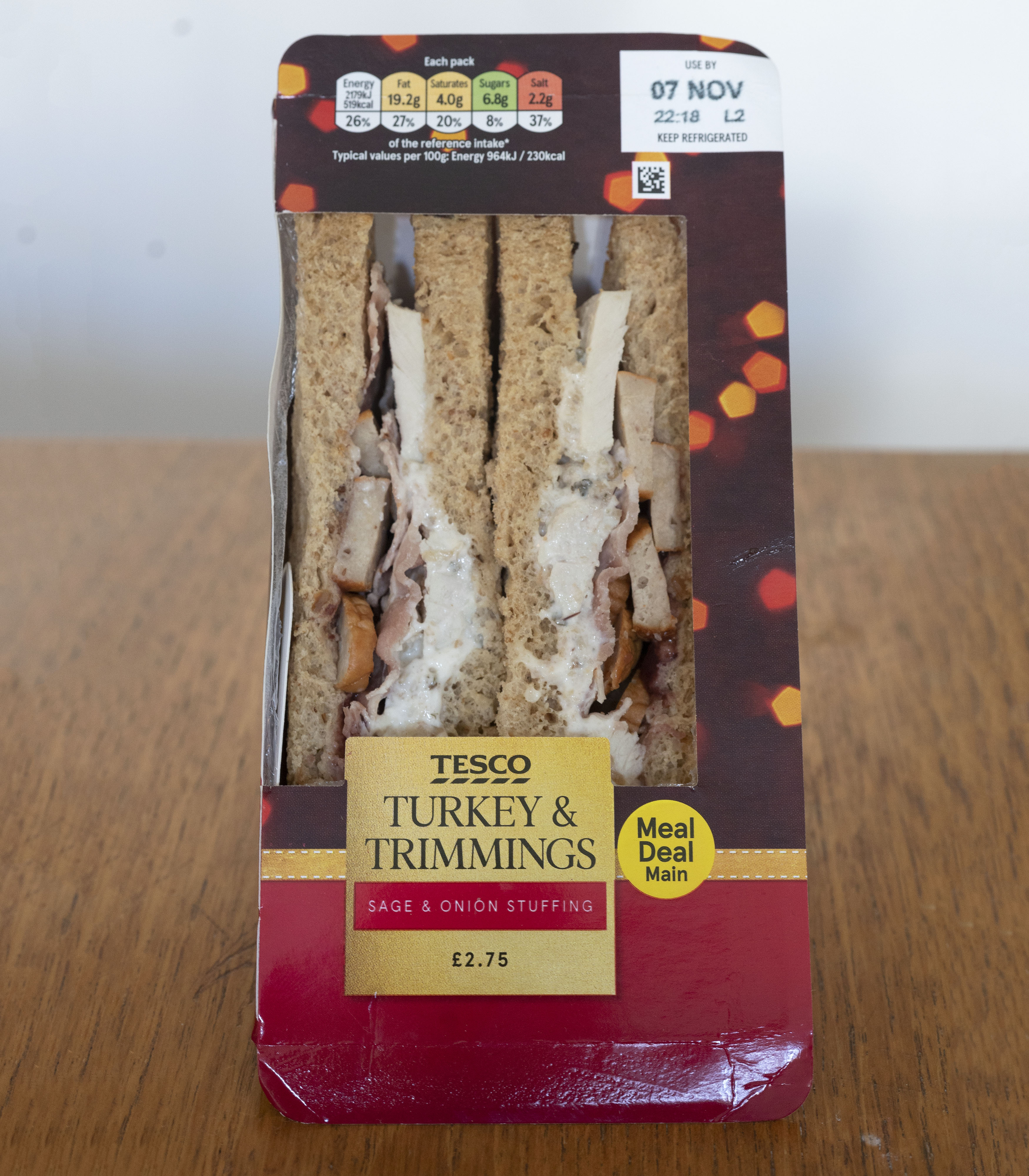 Tesco’s offering was cheap but not high on taste pointsCredit: Chris Eades

We weren’t impressed with Tesco’s offering which didn’t contain much meat, was made with claggy bread which sticks to the teeth and had an overpowering peppery after-taste.

It was one of the cheaper sandwiches available though. 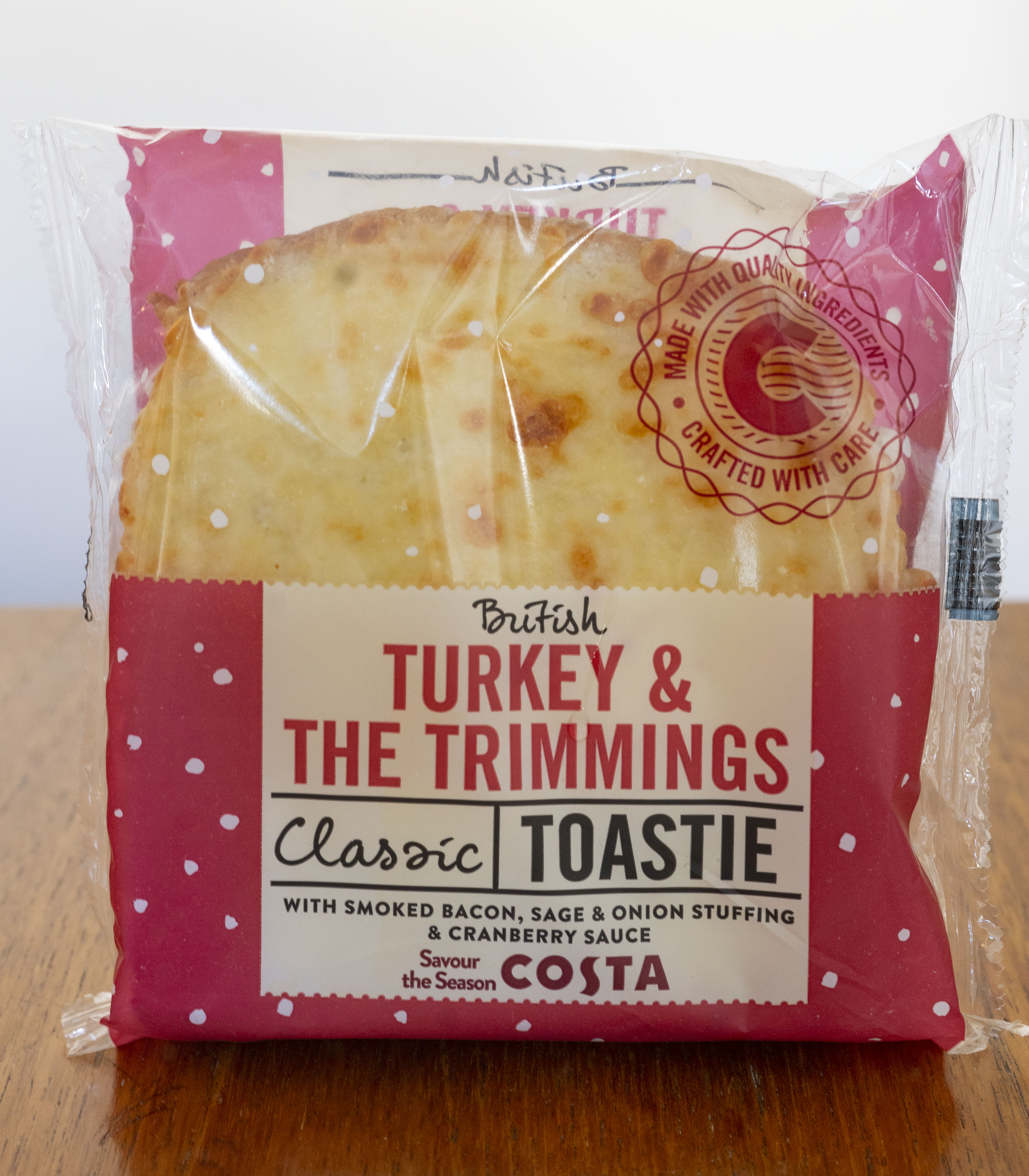 Costa’s toastie turned out to be a turkeyCredit: Chris Eades

On the naughty list this year was Costa’s Christmas toastie.

Although we liked the original idea of a toasted Christmas sandwich, it didn’t really work as the cheese topping made it feel very greasy and there was a disappointing lack of filling inside.

At £3.50 it was the second most expensive sandwich we tested and it seemed poor value for money.

Check out how other supermarket quirkiest festive feasts stack up when it comes to calories.

Morrisons has beaten posh supermarket Waitrose and been crowned the winner of this year’s blind taste test for champagne.

Mince pies from budget supermarkets Aldi and Iceland have topped a blind taste test by Which?.