In the purported audio clip, Banerjee is heard telling the Sitalkuchi TMC candidate ‘to hold rallies with the bodies of the people killed in CISF firing’ on 10 April 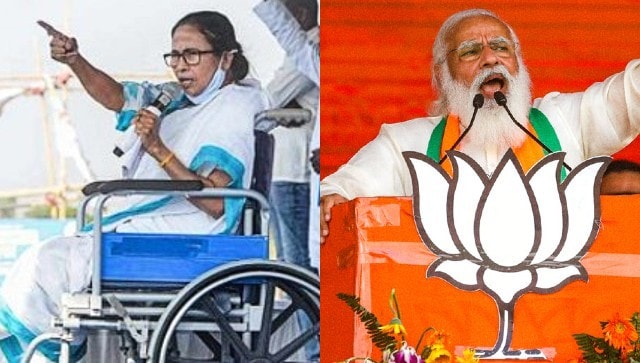 Kolkata: A controversy erupted on Friday after the BJP released a purported audio clip in which West Bengal chief minister Mamata Banerjee is heard telling the Trinamool Congress nominee of Sitalkuchi to hold rallies with the bodies of the four people killed in CISF firing during polling on 10 April.

Claiming that such a conversation never took place, the TMC described the audio clip as “bogus” and wondered whether the Centre is tapping a chief ministers phone.

Firspost could not independently verify the authenticity of the audio clip, which was released on the eve of the fifth phase of the polls.

Releasing excerpts of the telephonic conversation between Banerjee and Partha Pratim Ray, the TMC candidate of the Sitalkuchi seat, the BJP’s IT Cell chief Amit Malviya claimed that the “chief minister is trying to instigate riots by asking her party leaders to take out rallies with bodies”.

“She is heard asking her party candidate to frame the case in such a way that both the superintendent of police (of Cooch Behar) and other central forces personnel can be framed. Is this expected from a chief minister? She is trying to instil a sense of fear just for minority votes,” he said.

BJP president JP Nadda alleged that the ruling party of the state signifies the culture of vultures.

“TMC signifies VULTURE CULTURE- of feasting on death for petty political gains. TMC should be ashamed of themselves,” Nadda said in a tweet.

Four people were killed as central forces opened fire allegedly after coming under attack from locals, who “attempted to snatch their rifles”, near a booth in Sitalkuchi in Cooch Behar district during the fourth phase of polling.

According to BJP sources, the saffron party has decided to move the Election Commission over the audio clip.

In the purported audio clip, Banerjee is heard instructing Ray to keep his cool till the polling is over.

“Don’t panic. You should make arrangements for conducting a rally with the bodies the next day. And also consult a lawyer and file a police complaint so that neither the SP nor IC can escape,” she is heard saying.

The TMC’s Sitalkuchi candidate termed the audio clip as “bogus”.

“Such a conversation never took place. This audio clip is totally bogus. The BJP is just trying to confuse the people before the fifth phase of polling,” he said.

TMC spokesperson Derek O’ Brien and his Rajya Sabha colleague Sukendu Sekhar Roy asked the BJP not to play mind games with the people of the state.

“Did the Centre tap the private phone conversations of a sitting chief minister? We condemn this blatant breach of privacy and illegitimate usage of state machinery for petty political agenda,” Roy said at a late-night press conference.

“We will trounce BJP in this election. Dont play mind games with the people of Bengal!” O’Brien said.

Earlier, Banerjee has described the firing as genocide by central forces and termed it as a conspiracy by Union Home Minister Amit Shah.

Out of the eight-phase assembly elections in the state, four phases have been completed and the remaining four are scheduled to be held between 17 and 29 April.