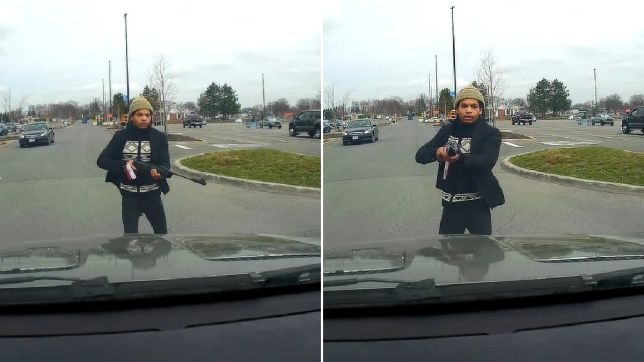 Daquan Forehand, 25, shoplifted a pellet rifle from a Walmart and used it to try to steal two cars (Pictures: Colonie Police Department)

A man released from jail on a cash bail traveled more than an hour away and shoplifted a pellet gun from a Walmart that he used to try to steal two cars the same day. Daquan Forehand, 25, bailed out on Wednesday morning and quickly went shopping with a family member at a Walmart in Latham, New York.

Forehand was ‘looking at a pellet rifle, when he suddenly grabbed the pellet rifle from the store clerk, and ran through the store into the parking lot,’ the Colonie Police Department said in a Facebook post on Thursday.

He then ‘ran through the area, menacing multiple people and attempting to steal at least two vehicles,’ before police officers detained him, according to the post.

Leading up to the arrest, police officers and witnesses both thought the pellet rifle was a real firearm.

Officers ‘showed tremendous restraint, being able to safely detain this individual using minimal force, in a chaotic scene where the use of deadly physical force would have been justified,’ the police department said in another Facebook post.

The cops stayed calm and used developing information from witnesses ‘to make split-second decisions, ultimately resulting in a successful outcome,’ the post stated.

Forehand did not appear to sustain injuries from the incident but is expected to go through a mental health evaluation. He remains in custody at a local hospital ‘under the supervision of the Albany County Sheriff’s Office,’ according to the post.

The resident of Utica, New York, was out on bail from Oneida County Jail after serving since March 7 for unrelated domestic charges.

The Walmart was placed on temporary lockdown following the incident.