A BABY whale has been rescued after it was found stranded in the River Thames.

The infant mammal became trapped in Richmond lock in South West London at around 7.30pm last night – but has now been saved with the hopes of releasing it back into the sea. 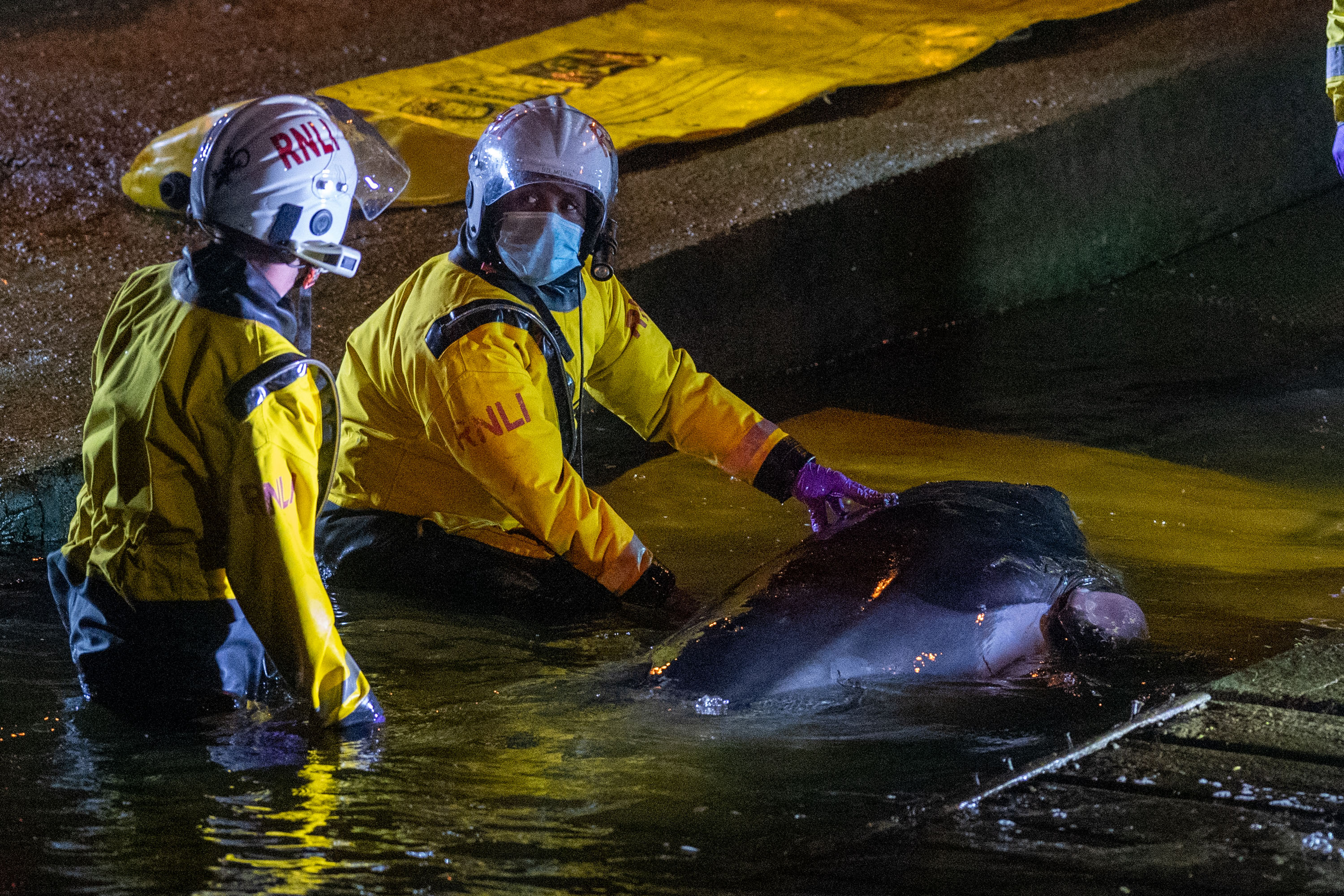 The RNLI have saved the baby whale at Richmond LockCredit: LNP 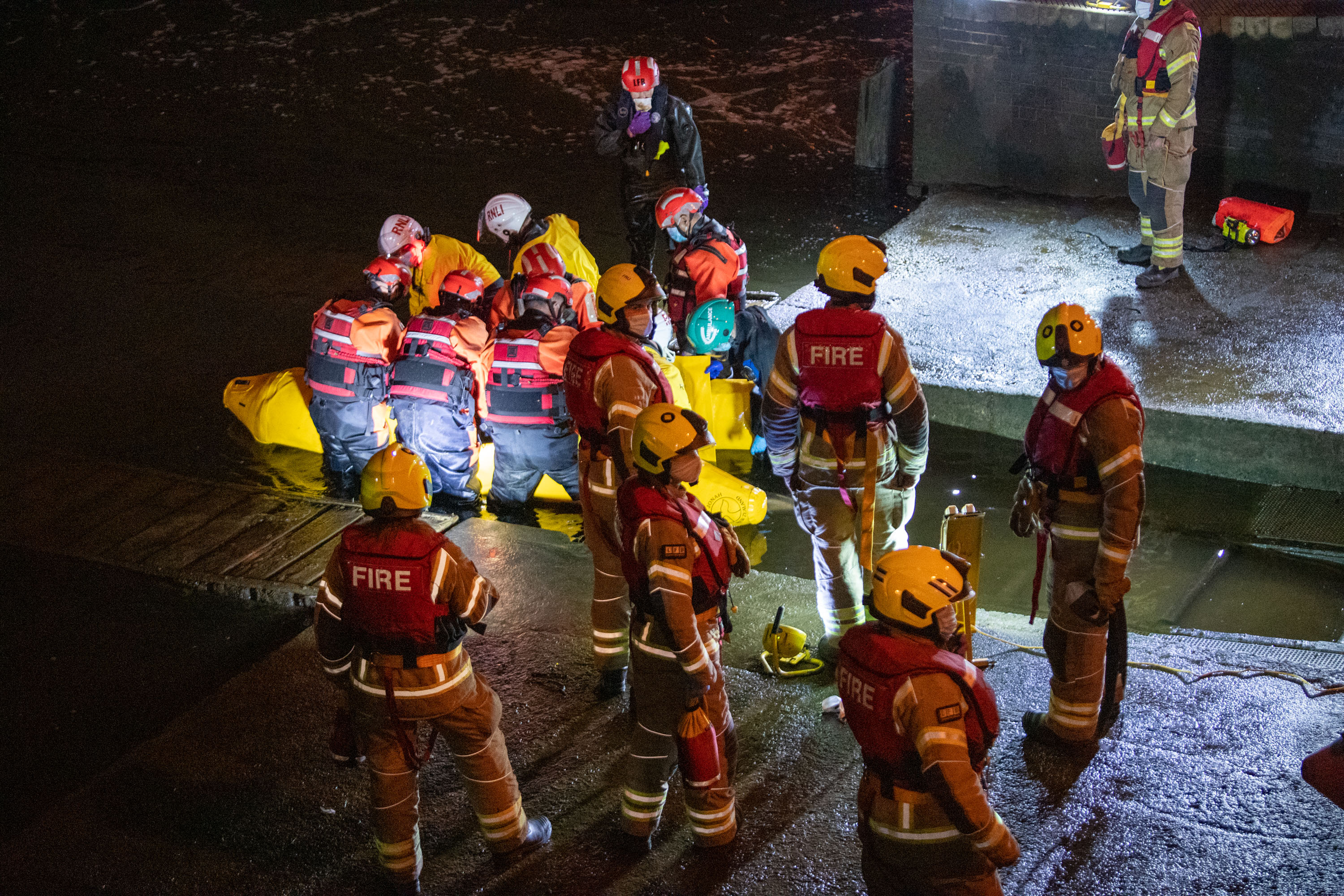 Emergency services were desperately trying to save the baby whaleCredit: LNP 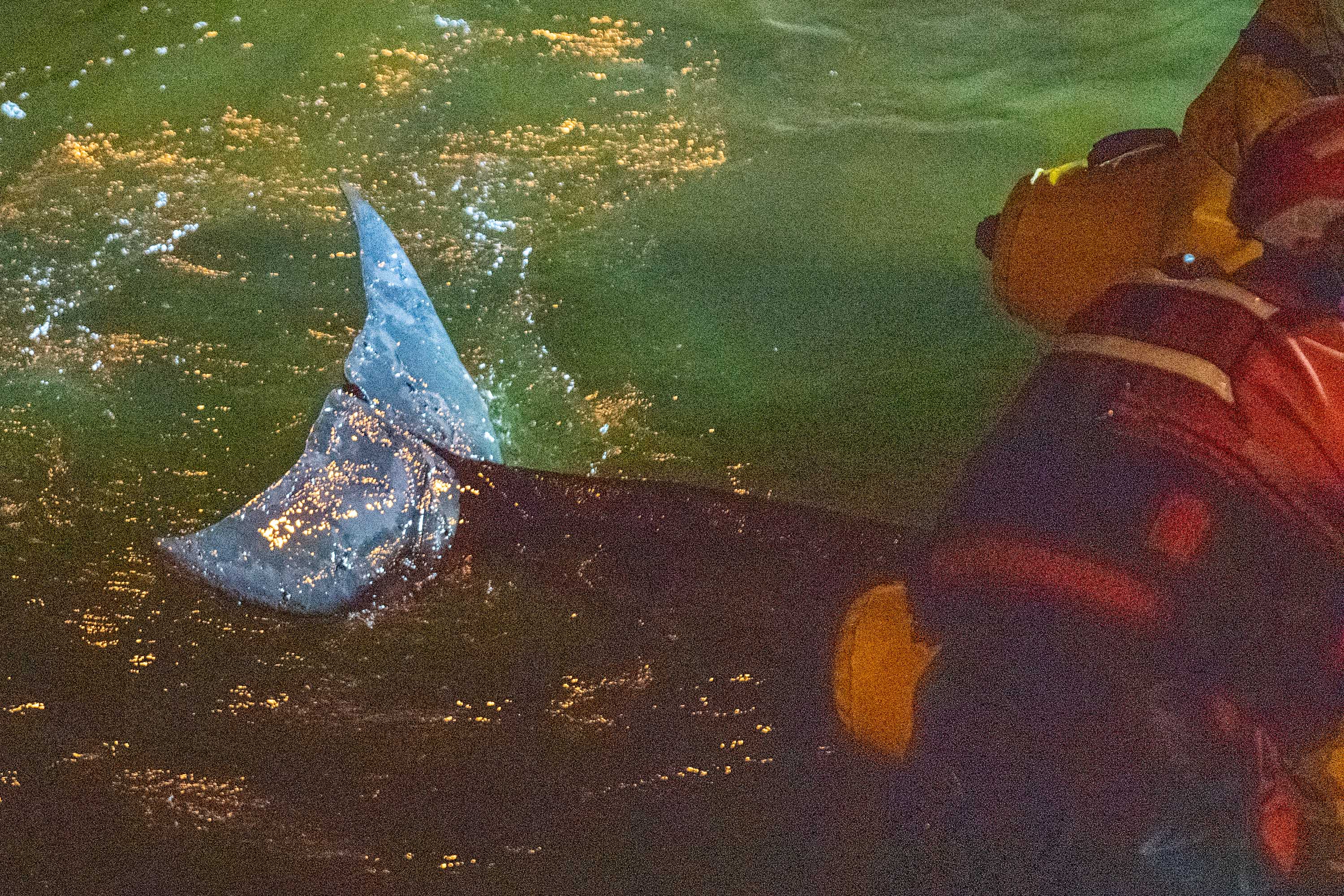 The whale, usually found in deep waters, was checked over by experts who watched its vitals and sprayed it with water.

A vet will now assess whether it is strong enough to be released back to sea after being moved to a safe location just after midnight.

A witness has said that “quite the crowd” of around 100 people watched as the attempted rescue took place.

Jake Manketo, 20, from Richmond, said: “Everyone here is just hoping they get it out.

“We couldn’t believe our eyes when we first saw the poor fella, not every day something like this happens in Richmond.”

The whale was said to be still alive but was stuck on the lock’s boat rollers, as emergency staff worked to set it free. 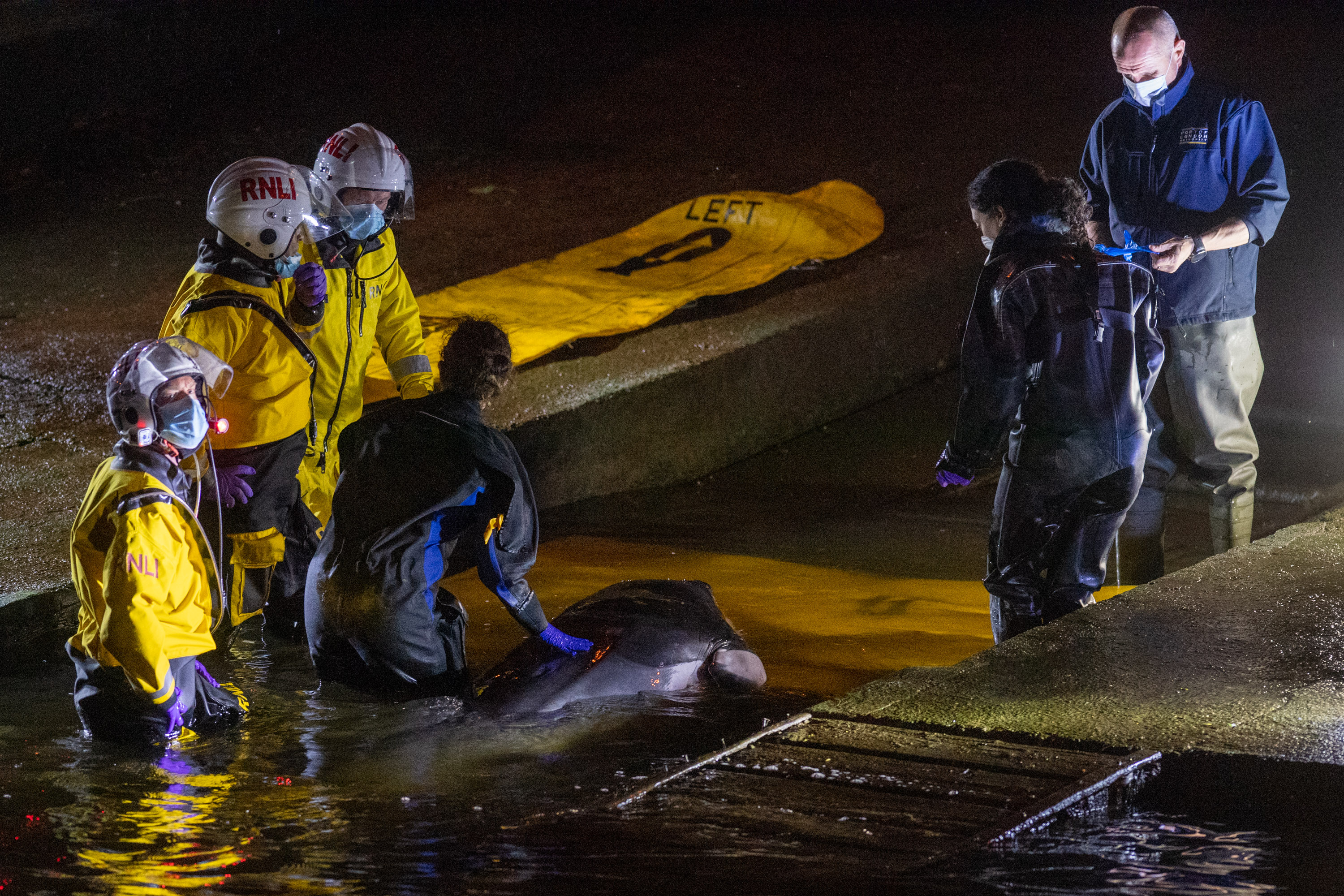 Emergency services were attempting to free the baby whaleCredit: LNP 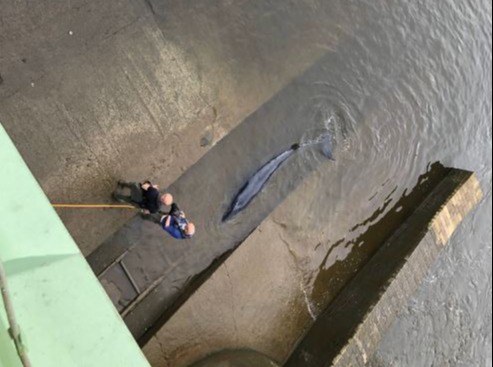 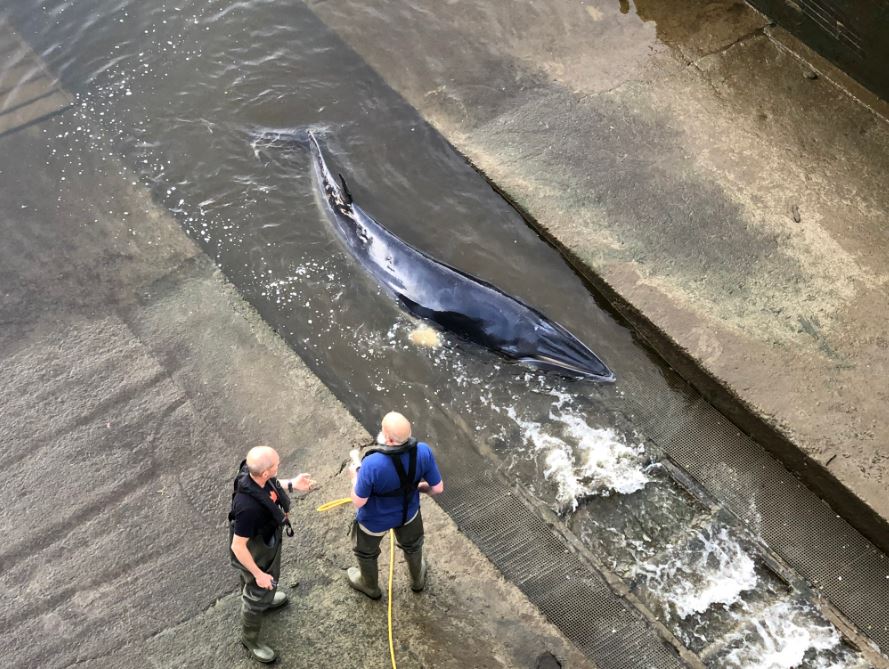 It is thought to be an infant whale which is 6metres in lengthCredit: dkfitldn

Fire crews have also been pictured at the scene, along with the British Divers Marine Life Rescue service.

It is believed the whale was first spotted at midday a few miles up the river near Barnes Bridge.

A spokesman for the Port of London Authority, which owns and operates the lock, said: “At around 7pm on Sunday, a small whale, approximately 3-4m long, believed to be a Minke whale, became stranded at Richmond Lock and Weir.

“PLA staff have attempted to assist the whale with water along with British Divers Marine Life Rescue.

“The whale is still alive and the Metropolitan Police are working to keep the public away from the water’s edge.”

The spokesman added that the situation is “not good”, though there is no “immediate danger” to the whale.

Minke whales are the smallest of the great whales, growing to about 10m.

They can usually be found throughout the northern Atlantic and Pacific Oceans.

Their range extends from the ice edge in the Arctic during the summer to near the equator during winter.

The lock is situated between Teddington and Richmond, comprising of three vertical steel gates suspended from a footbridge.

In 2019, a humpback whale named Hessy died in the Thames after being hit by a ship.

The 33ft marine mammal died after getting stuck near Kent. 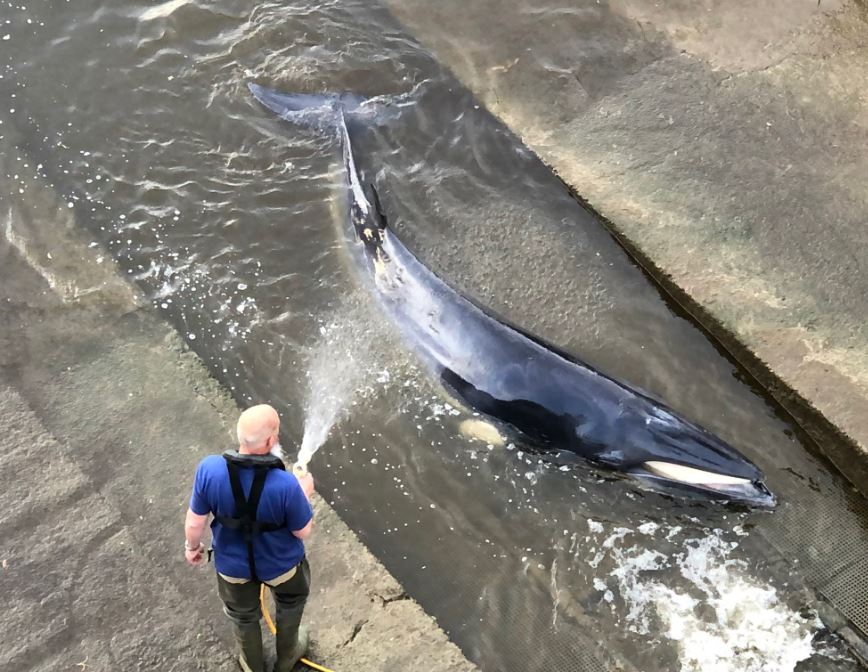 A baby whale has beached itself at Richmond LockCredit: dkfitldn 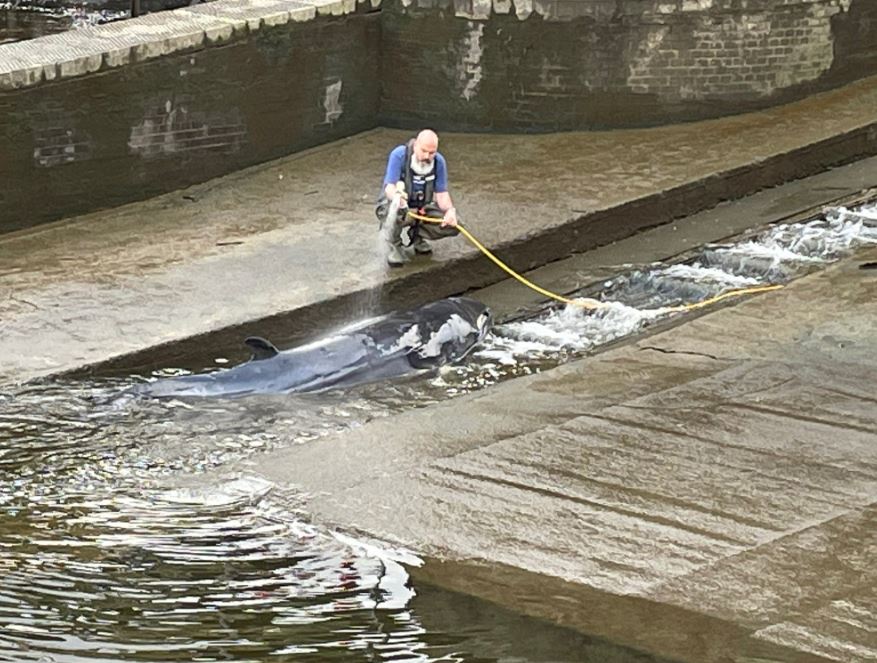 Rescuers have been spraying the mammal with water while waiting for the arrival of expertsCredit: @JakeManketo 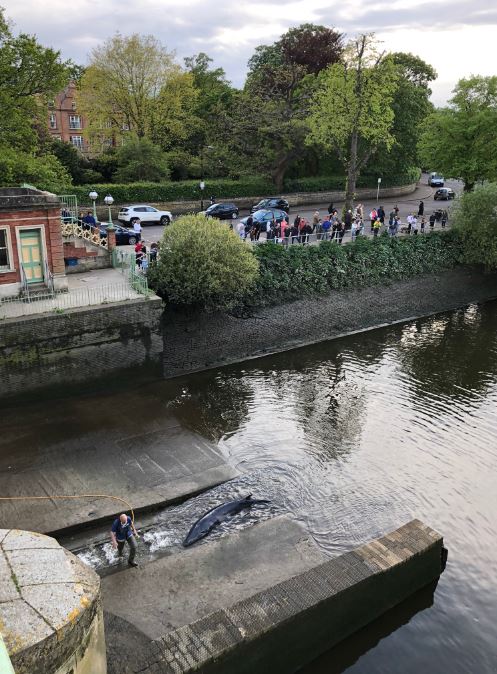