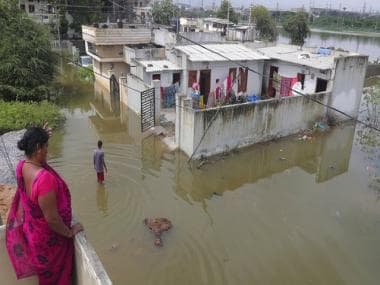 Torrential rains and floods in Telangana over the past couple of days have claimed the lives of at least 50 people and caused losses to the tune of over Rs 5,000 crore, the state government said on Thursday.

As per an official release, officials, at a review meeting held by Chief Minister K Chandrasekhar Rao, said that 11 of the deaths were reported from the Greater Hyderabad Municipal Corporation (GHMC) area.

Citing preliminary estimates, Rao said the state suffered losses of over Rs 5,000 crore in the heavy rains that led to flooding of several low-lying areas on Wednesday, with the state capital being the worst hit.

“According to estimates, standing crops in 7.35 lakh acres were inundated in floods. Assuming that at least 50 percent of these crops were completely damaged, the loss would be around Rs 2,000 crore,” a Hindustan Times report quotes him as saying.

The chief minister has written to Prime Minister Narendra Modi appealing for the immediate release of Rs 1,350 crore for relief and rehabilitation works, the release added.

As per the Hindustan Times report, the chief minister announced an ex-gratia payment of Rs 5 lakh each to the kin of the deceased and assured that those who had lost houses completely in the flash floods would be sanctioned new houses. Financial assistance would be extended to those whose houses were partially damaged, he said.

During the meeting, officials informed the chief minister that the Greater Hyderabad Municipal Corporation received 31 cm of rain on Tuesday, which was the highest in a single day after 1916, as per a Bangalore Times report. Immediate assistance of Rs 5 crore will be released to the GHMC for relief works.

Apart from the GHMC areas, the rain and floods caused destruction in 30 towns across Telangana, inundating 238 colonies and disrupting connectivity to 150 places, as per the Hindustan Times report.

Roads in the state were also extensively damaged and there was a loss of Rs 295 crore to panchayat roads, Rs 184 crore to the state roads and Rs 11 crore to national highways, officials told the chief minister during the review meeting.

As per another report in the Bangalore Times, the deluge also inflicted damage on the historic Qila Shahpur Fort in Raghunadhapally of Jangaon, a portion of which collapsed on Thursday, damaging three houses.

The chief minister instructed officials to provide relief to people affected by rains and floods on a war-footing, and asked them to distribute rice, pulses and other essential items besides three blankets to every household, as per reports.

As the rains subsided, relief operations were conducted in Hyderabad and other places which saw low-lying areas being inundated, property as well as standing crops being damaged damage to property. Earlier in the day, state Chief Secretary Somesh Kumar told news agency PTI that relief teams were working to pump out water from inundated areas and to restore normal traffic.

About 1.5 lakh food packets were being supplied and Annapurna subsidised food canteens in Hyderabad were utilised in the areas where water stagnated, he said.  The relief camps would continue for a couple of days, he added.

With no rains on Thursday, water started receding in most parts of the GHMC limits but some localities remained water-logged. The Disaster Response Force (DRF) was also worked to clear fallen trees and stagnated water following the heavy downpour, besides attending to calls for rescue from people marooned.

Efforts were also underway in the afternoon to trace six members of a family who were among the nine people washed away in the flood waters on Wednesday at Bandlaguda, police said. Meanwhile, the body of a postman, who fell into floodwaters on Tuesday while on duty, was fished out from a lake on Thursday, they said.

The body of a private employee, who got swept away while riding a two-wheeler in Gaganpahad on Tuesday night was traced to a drain on Thursday, said a police official.

Rama Rao instructed officials to evacuate people from dilapidated buildings and construction sites, even using force with the help of police wherever necessary, to prevent any untoward incident. Observing that there was a likelihood of sudden outbreak of epidemics and the spread of water-borne diseases, he said medical camps should be set up in the city and also ordered ambulances to be provided. He also directed that damaged roads in the city should be restored immediately.

Around 44,000 people were put up in 64 relief camps and 45,000 food packets were provided, an official release quoted him as saying.

Telangana received torrential rainfall over the past three days due to a deep depression over the Bay of Bengal. The state government had declared holiday on 14 and 15 October.

Lauren Goodger, 34, says ‘I love you’ to toyboy Charles Drury, 23, after just three weeks of dating