Migrants make their way up the beach after arriving on a small boat at Dungeness in Kent (Picture: PA)

The highest ever daily total of migrants travelling across the English Channel to the UK has been recorded after 430 arrived from mainland Europe.

Dozens of men, women and young children were seen walking ashore as boats landed across the Kent coast.

It comes as the mercury soared to 30C during the heatwave, with temperatures set to increase further this week.

Migrants have continued making the perilous journey across the Channel, despite Home Secretary Priti Patel’s vow to make the crossings ‘unviable’.

In Dungeness in Kent, around 50 people were seen landing on a beach in a single dinghy.

Some raised their hands in celebration as they walked up the beach, while others sat down on the shingle shoreline in the sun. 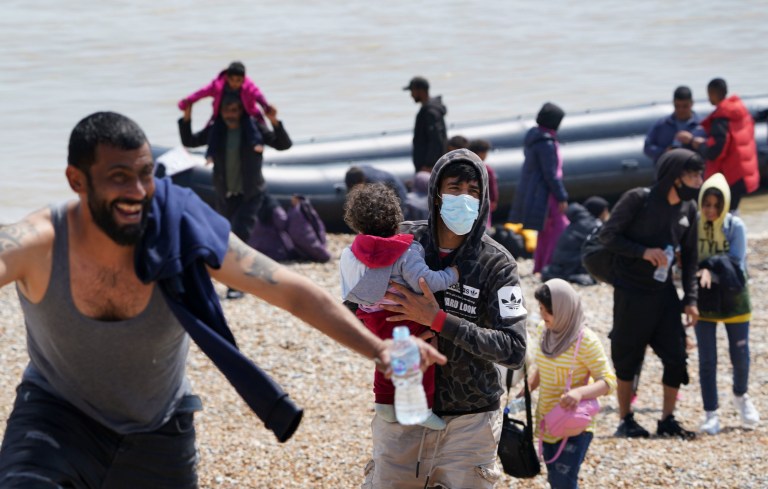 Men, women and children arrived on the beaches in Kent after crossing the Channel (Picture: PA) 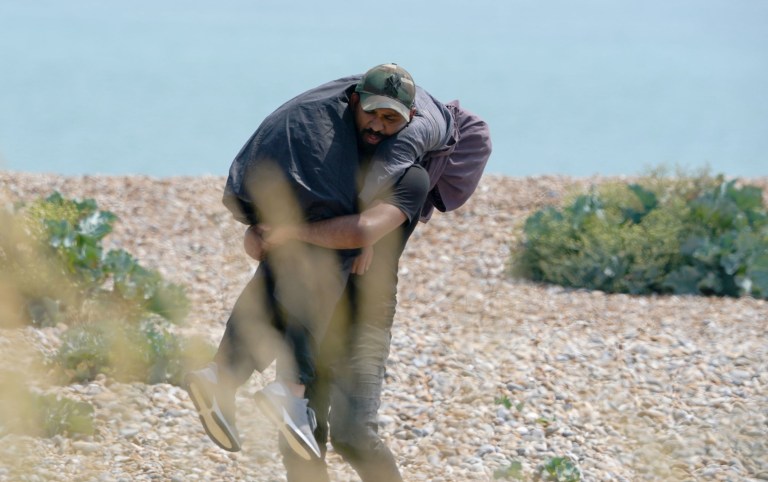 A man carries a woman as a group of migrants make their way up the beach (Picture: PA) 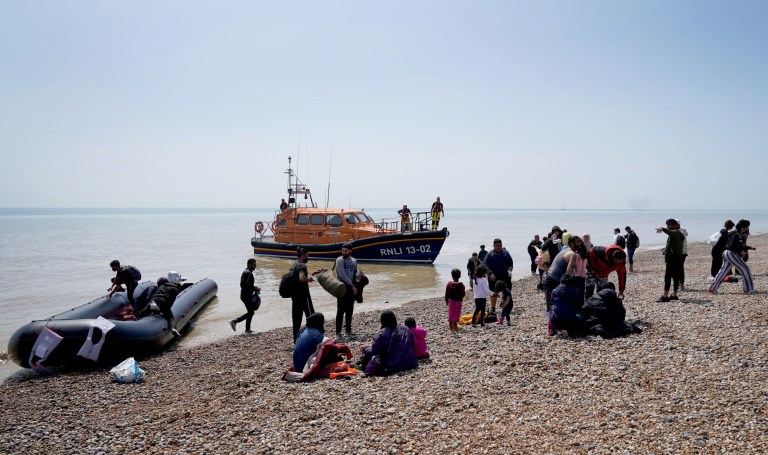 They were taken away by border staff (Picture: PA) 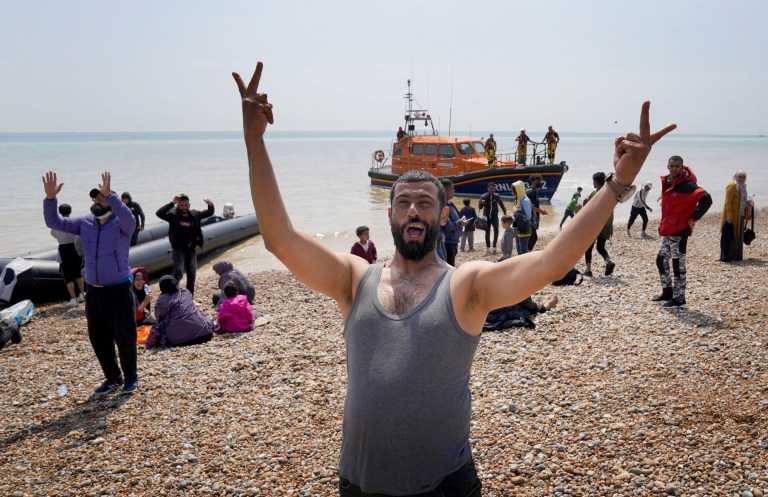 A man celebrates as a group of people arrive on a small boat at Dungeness in Kent (Picture: PA)

The large dinghy is believed to have left northern France or Belgium earlier on Monday before crossing the dangerous 21-mile Dover Strait.

The vessel had been watched by the RNLI as it got closer and closer to the coast before eventually landing on the beach at around 1pm.

Among the arrivals were women and children, some too young to walk, and some people had to be supported as they walked on to the beach.

Also on Monday, plans for sweeping reforms of the asylum system under the Nationality and Borders Bill, were debated again in Parliament.

The Bill, dubbed the anti-refugee Bill by critics, includes clauses to allow the UK to send asylum seekers to a ‘safe third country’ and to submit claims at a ‘designated place’. 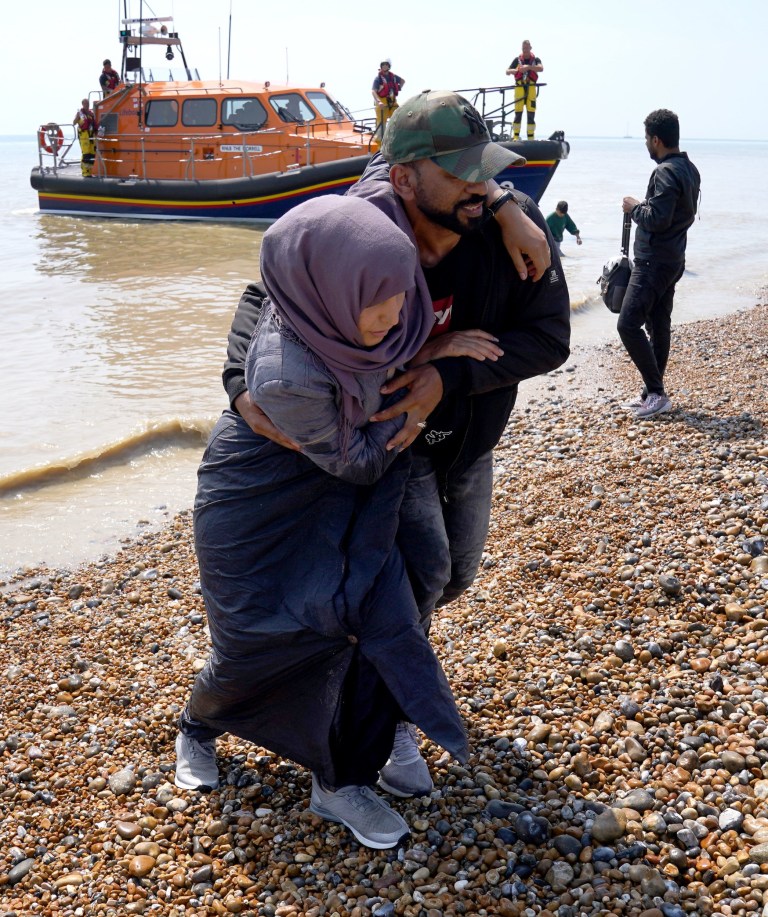 A woman is helped ashore after making the perilous journey across the Channel in the baking heat (Picture: PA) 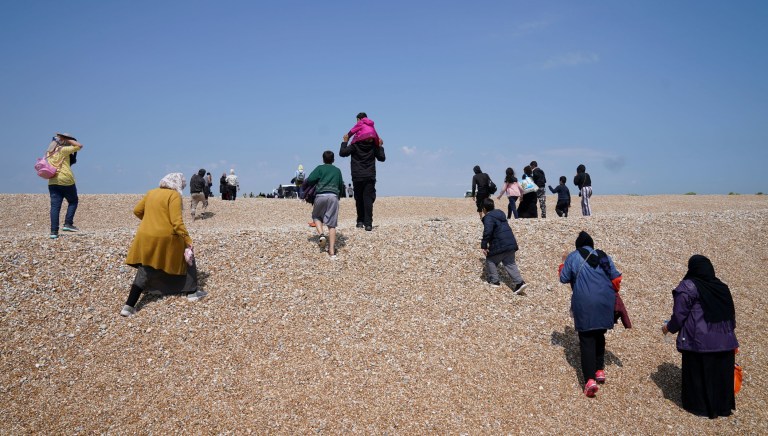 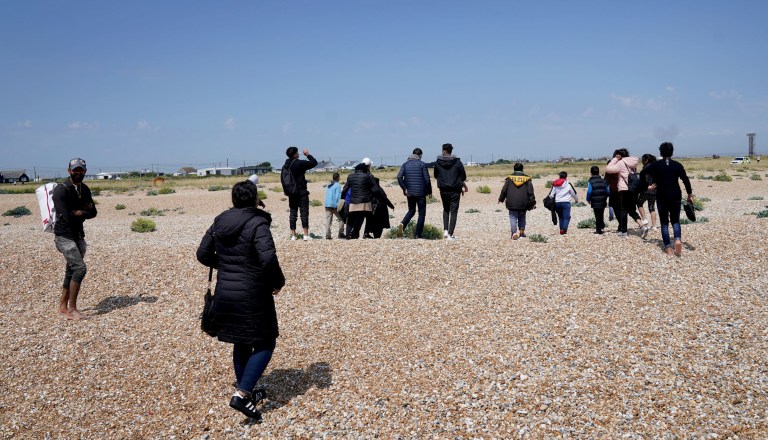 The migrants arrived during the sweltering heat (Picture: PA)

Theresa May sounded warnings over the prospect of sending asylum seekers to Australia-style offshore processing centres.

The former prime minister said she considered the idea when home secretary under David Cameron, but rejected it due to ‘practical concerns’.

Bella Sankey, director of charity Detention Action, said: ‘The Home Office’s anti-refugee Bill is political theatre that doesn’t even pretend to deal with the issue or make our system, safe, fair or efficient.

‘We need a mechanism allowing refugees arriving at the UK border in France to be given safe passage, and until we have it, all else is noise and distraction.’