WASHINGTON—President Biden told world leaders that the U.S. is committed to sharply cutting its greenhouse-gas emissions in the next decade, as other countries also promised climate action and some urged rich nations to shoulder more responsibility.

“No nation can solve this crisis on our own,” Mr. Biden said at the start of a two-day virtual climate summit at the White House. “All of us, and particularly those of us that represent the world’s largest economies, we have to step up.”

The climate summit is aimed at jump-starting negotiations for a global deal to curb emissions world-wide. The event features 40 heads of state, with allies and rivals such as Russia and China among them.

Mr. Biden used the summit to unveil a new target that calls for U.S. emissions to be 50% to 52% lower in 2030 than levels in 2005, a common baseline for such climate targets.

In 2019, the most recent year for which complete data is available, U.S. emissions were about 13% below 2005 levels, according to the Environmental Protection Agency. Emissions last year were projected to be down 21% from that 2005 baseline, due in part to a slowdown related to the pandemic. But this year, emissions are tracking higher again as the economy recovers.

“The signs are unmistakable, the science is undeniable and the cost of inaction keeps mounting,” Mr. Biden said.

said China will reduce coal consumption starting in 2025. And he reiterated the timetable he has already set forth for China reaching peak carbon emissions before 2030 and achieving carbon neutrality—net-zero carbon-dioxide emissions—by 2060.

China, the world’s No. 1 emitter, and many developing nations have long resisted demands that they take major actions to combat climate change, arguing that wealthy nations were allowed to release greenhouse gas emissions into the atmosphere unchecked for decades while they industrialized.

announced a new partnership with the U.S. to expand renewable energy. India is one of the world’s top emitters and is seen as a crucial player in international climate negotiations.

said his country would aim for a reduction in carbon output below 2005 levels of between 40% to 45% by the end of the decade.

Meanwhile, some developing countries and nations that are most vulnerable to the effects of climate change said wealthy nations need to move faster.

“Too often, vulnerable countries hear the excuse that state emission cuts are too costly, but political signals, especially from the major economies, shape decisions on investment and innovation for low-carbon pathways,” said Marshall Islands President David Kabua, whose country is threatened by sea-level rise. “Now is the moment for the signal to be unequivocal.”

Many nations’ leaders are skeptical of American promises on climate following decades of sharp policy shifts, including President

abandoning the 1997 Kyoto Protocol and President

withdrawing from the Paris climate deal that President

played a central role in negotiating in 2015.

What do you think will come out of Biden’s climate summit? Join the conversation below.

Developing countries are also pursuing billions of dollars in financial assistance to help them lower their emissions, adapt to the effects of climate change and offset the costs of limiting their reliance on fossil fuels.

Since Mr. Biden took office in January, Congress has made little progress on legislation that would push the U.S. toward the 50% emissions-reduction target, and the Biden administration hasn’t formally proposed major new climate regulations. His emissions target is certain to face criticism from Republican lawmakers and some in the business community who worry that the administration’s climate policies could harm the economy.

Some major companies, including

have endorsed the 50% target.

In announcing the target, administration officials reiterated their broad climate-policy goals, including zeroing out carbon-dioxide emissions from power plants by 2035, increasing the energy efficiency of buildings and cutting emissions in the transportation sector. The White House hasn’t outlined a detailed plan to meet the target.

Administration officials said they see multiple paths toward achieving their goals, through a combination of federal policies and action by states, companies and other subnational groups. Mr. Biden has proposed a $2.3 trillion infrastructure package that includes measures to reduce emissions, such as a proposed standard mandating that the country’s electricity be produced with low-carbon energy sources.

The formal plan the U.S. intends to submit to the United Nations will include broad top-line options for reaching the target. A federal climate task force set up by Mr. Biden will release a more detailed plan later this year, the officials said. The moves come ahead of final negotiations aimed at increasing national climate targets scheduled by the U.N. for November in Glasgow.

A 2019 report from climate advocates projected that U.S. states, cities and businesses alone could reduce U.S. emissions to 37% below 2005 levels by 2030. With additional federal actions to drive a rapid reduction in electricity-sector emissions and wide use of electric vehicles, that number could increase to 49%, the report said. 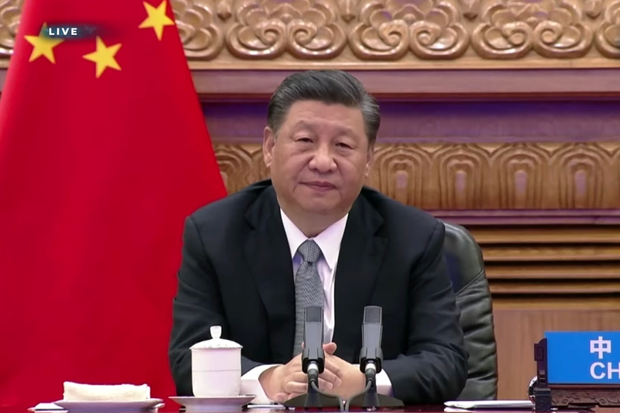 
Without new laws and regulations in place, it will be difficult to persuade other countries to trust that U.S. action is coming and follow suit.

“Anything in the range of 50% is going to be tough to deliver,” said George David Banks, who was Mr. Trump’s top White House adviser on climate issues. “If the U.S. puts forward a really ambitious target and China doesn’t do anything, Republicans will say ‘You’re soft on China, you’re doubling down on this bad deal.’”

Mr. Xi’s promise offered a peak but not an end to China’s coal consumption and didn’t meet the expectations of climate campaigners who were hoping for a more ambitious emissions reduction timetable.

He told The Wall Street Journal the administration’s efforts should be judged on whether other countries can quicken the timeline on their pledges to eliminate emissions. He reiterated his concerns about China’s target during a private call with Senate Democrats on Wednesday, according to a person familiar with the briefing.

“China has committed to move from carbon peak to carbon neutrality in a much shorter timespan than what might take many developed countries, and that requires extraordinary hard efforts from China,” Mr. Xi said in his speech Thursday.

The summit features the U.S. president and high-ranking cabinet members, along with leaders from liberal democracies and autocracies, oil producers and island nations threatened by rising seas. They are joined by business, cultural and nonprofit leaders, including Pope Francis and Bank of America Corp. Chief Executive

on the first day, and

The White House has noted that invitees include 17 countries responsible for about 80% of all global emissions. Mr. Biden has stressed the need for urgent action because emissions are still rising globally, while forecasts from a U.N. science panel say the world must roughly halve emissions by 2030 to stave off the worst, irreversible damage from climate change.

In the biggest climate commitment made by any nation, China pledged to go carbon neutral by 2060. While it will be challenging for Beijing to achieve its goal, China’s plan to become a green superpower will have ripple effects around the world. Illustration: Crystal Tai

“This is the decade we must make decisions that will avoid the worst consequences of our climate crisis,” Mr. Biden said in his opening remarks.

Global progress has been slow since the Paris accords went into effect. Several of its biggest advocates found it difficult to fulfill their ambitions and within a year, China’s emissions began accelerating again after a brief slowdown.

Critics have called for more aggressive enforcement of any new emissions deals, which is likely to be a major part of talks in the months to come. Mr. Kerry said emerging satellite and artificial-intelligence technology make it easier now to track and verify emissions, and he said the U.S. will consider deploying them.

There will be no bilateral meetings for deal-making on the sidelines of the virtual event, administration officials said.

Some developing countries used the summit to urge wealthier nations to help finance their efforts to reduce emissions and to adapt to the effects of a warming planet. Brazil has asked the Biden administration for $1 billion in exchange for it reducing deforestation by 40%. Indian officials have also already stressed to Mr. Kerry that the U.S. and other industrialized countries need to make good on pledges to mobilize as much as $100 billion a year in support of similar efforts.

pledged to reach carbon neutrality by 2050, improving the previous target of 2060, while promising to end illegal deforestation by 2030. In his speech at the summit, Mr. Bolsonaro called on rich nations and carbon markets to help finance such environmental protections.

“There must be fair payments for environmental services provided by our biomes to the planet at large as a way to recognize the economic nature of environmental conservation activities,” Mr. Bolsonaro said. “We stand ready and remain open to international cooperation.”

the special envoy for climate change for Mr. Obama, said he doesn’t expect that a large number of countries will use the summit to make major climate announcements. But he said he hopes the event puts pressure on nations to commit to near-term actions to reduce emissions so the world can meet the Paris agreement’s target of keeping average global temperature rises to 1.5 degrees Celsius above preindustrial levels.

—Sha Hua and Paulo Trevisani contributed to this article.

Write to Timothy Puko at tim.puko@wsj.com