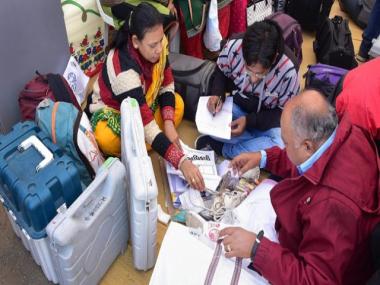 Counting of votes for the Assembly elections, which will see nearly 18.68 crore electors in four staets and one UT exercise their franchise, will take place on 2 May

The Election Commission on Friday announced the schedule for assembly polls in Tamil Nadu, Assam, Kerala, West Bengal, and Puducherry. The elections will be held on eight days across two months from 27 March to 29 April while counting of votes to be held on 2 May.

The voting for the five assembly elections will begin on 27 March, with West Bengal having the maximum eight phases continuing till 29 April 29, the Election Commission said on Friday.

The state of Assam will vote to elect a new Assembly in three phases on 27 March, 1 April and 6 April, while polling for Kerala, Tamil Nadu and Puducherry assembly elections will take place in a single phase on 6 April.

Elections for the West Bengal assembly will be held in eight phases, up from seven last time, beginning with polling for 30 seats on 27 March, Chief Election Commissioner Sunil Arora said while announcing the poll schedule.

In Puducherry, President’s Rule has been imposed and the Assembly kept under suspended animation after the V Narayanasamy-led Congress government resigned earlier this week ahead of a vote of confidence.

Nearly 18.68 crore electors will cast vote at 2.7 lakh polling stations in Tamil Nadu, West Bengal, Kerala, Assam and Puducherry during the period, Arora added.
Here’s the full schedule for the Assembly elections in the four states and the UT of Puducherry:

Election to be held in a single phase on 6 April.

The state of Tamil Nadu is currently ruled by National Democratic Alliance-ally AIADMK. However, the party has been riddled with factionalism since the demise of its president and former chief minister J Jayalalithaa.

However, in the wake of Jayalalithaa’s demise, her party has faced constant challenges from people that were once united under the AIADMK umbrella. To begin with, Jayalalithaa’s companion and caretaker VK Sasikala — who had been serving time in prison in a disproportionate asset case — had challenged Chief Minister EK Palanisamy’s authority.

O Panneerselvam, who is now the deputy chief minister of the state, had also raised a rebellion, forcing the party to split up for some time. However, these two factions were able to work out a power-sharing formula and joined hands.

The two Dravidian parties will lock horns in the Assembly polls for power. Kamal Hassan’s Makkal Needhi Maiam (MNM) and TTV Dinakaran’s Amma Makkal Munnettra Kazagam are among other key players in the state.

The elections in West Bengal will be held in eight phases between 27 March and 29 April.

The state is held by the All India Trinamool Congress (AITC with an absolute majority, with Mamata Banerjee on her second consecutive term as chief minister. The ruling party is fighting a pitched battle with archrival BJP, while the Congress-led alliance is also a key player in the fray.

In January this year, Congress had allied with the Left Front and had worked out a seat-sharing formula for 193 of the 294 seats. Out of the 193 seats agreed upon, 92 went to Congress and 101 to the Left Front.

In the previous elections in 2016, AITC (or more commonly known by its former name TMC) retained its majority by winning 211 of the 293 seats. The Congress managed to win 44 seats and the Left Front won 33 seats fighting within an alliance. The BJP and the Gorkha Janmukti Morcha, who were in alliance managed to win only 3 seats each.

The elections in the UT of Puducherry will be held in a single phase on 6 April.

Congress, AIADMK, and DMK are the traditional key players in the Union territory with Congress securing a bare majority in the previous election. However, the government fell ahead of a trust vote this month after several key leaders quit the party. Before tendering his resignation, Narayanasamy blamed the fall of his government on the BJP. The state is currently under President’s Rule.

In 2016, the Congress had won 15 out of the 30 seats, the All India NR Congress won eight, AIADMK got four seats while the DMK won two. BJP had not won even a single seat.

Elections in the state of Kerala will be held in a single phase on 6 April.

Elections in Kerala have traditionally been a contest between the UDF and the LDF with power swinging between the two groups. The NDA, which is emerging as a third front in Kerala, will be hoping to increase its tally in the Assembly polls.

However, in a setback to the ruling party in Kerala, as many as 98 members of Left parties joined the local unit of BJP in the presence of Union Minister Pralhad Joshi in Thiruvananthapuram on 24 February.

Set to enter the political fray by joining the BJP, technocrat E Sreedharan said his main aim is to help the party come to power in Kerala and that he will be open to chief ministership.

He also said that the focus will be on developing infrastructure in a big way and bring the state out of the debt trap if the BJP wins the Assembly polls.

Known as ‘Metroman’ as well as for the efficiency in completing big infrastructure projects, Sreedharan told PTI that he will contest the Assembly elections if the party wants and will also be open to chief ministership if the party asks.

Elections in Assam will be held in three phases between 27 March and 6 April.

Faced with contests from two different fronts — the Congress-lead Opposition and the regional thrid front — the ruling Bharatiya Janata Party (BJP) and Asom Gana Parishad (AGP) in Assam are trying to get their seat-sharing arithmetic right to retain power in the upcoming Assembly polls.

A part of its announced plan to win 100-plus seats in the 126-member Assembly, the alliance partners are engaged in talks and are likely to leave seats occupied by candidates from the other party in this election to increase chances of retaining them.